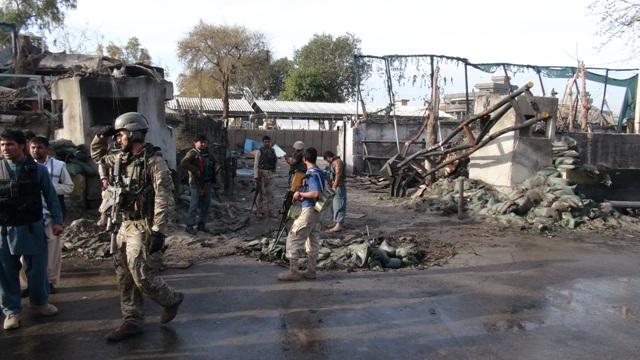 JALALABAD (PAN): More than a dozen people were killed on Tuesday when a group of suicide bombers stormed the Quick Reaction Force (QRF) headquarters in eastern Nangarhar province, officials said.

Eight suicide bombers and five police personnel were killed in the audacious predawn assault in Jalalabad, the provincial capital, a police spokesman said.

Col. Hazrat Hussain Mashriqiwal told Pajhwok Afghan News that several civilians were wounded in the bomb attack, followed by intense gunfire. Some of the bombers blew themselves up, while eight others were killed by police.

But the provincial police chief Lt. Gen. Mohammad Sharif Amin put the number of assailants at eight, saying that one of them detonated his explosives-laden Surf vehicle in front of the QRF headquarters.

Moments after the ensuing clash, another bomber detonated his car, the police chief told reporter. Five suicide attackers were shot dead in the gunbattle, he said, praising the policemen for showing exemplary courage.

Five policemen were killed and four others injured as a result of the incident, according to Gen. Amin, who said the QRF had been able to thwart a major terror plot.

A doctor, meanwhile, said on condition of anonymity that 13 injured, including six policemen, had been evacuated to the Jalalabad Civil Hospital. The wounded are in stable condition.

As usual, the Taliban claimed responsibility for the attack. The group’s spokesman Zabihullah Mujahid said that dozens of Afghan and foreign security personnel had been killed. He acknowledged the loss of only five fighters.

A guard at the provincial police headquarters, situated close to the scene, said he saw one vehicle exploding. “Two people standing in front of a four-storey building in the area asked me to open the door.

“When I took a close at them, they had weapons beneath their sheets. I gunned down both,” the policeman said, claiming that they wanted to attack the QRF compound from the market.

Area resident Hekmatullah said he heard a big explosion at 4.30am. A little while later, there was a burst of gunfire, he said. The resident had no idea about the casualties.