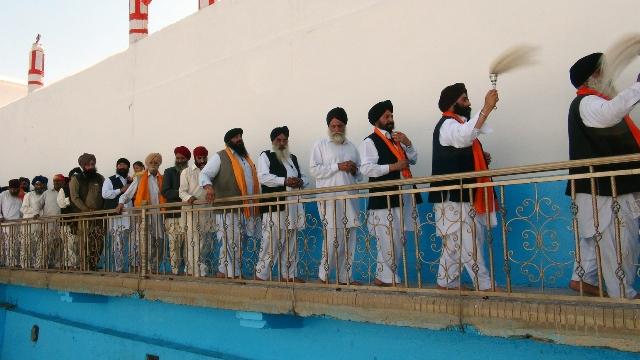 The long-oppressed minority celebrates the festival in many parts of the province, including Jalalabad, the provincial capital. Thousands of Sikh families have been forced into migration over the past three decades from Nangarhar.

Of the 37,464 families before the civil war, only 400 are left in five provinces, with 84 households internally displaced.

The festival began in Sultanpur area of Surkhrod district. Devotees are expected to throng the two temples in Jalalabad to listen to recitation from the Guru Granth Sahib.

Dr. Armeeth Singh, who speaks for the community in Nangarhar, told Pajhwok Afghan News that Vaisakhi — a day steeped in tradition  — marked the birth of the Khalsa (Pure Ones).

The day was first celebrated in 1699 when Guru Gobind Singh, the 10th Sikh Guru, baptised his followers with Holy Amrit, nectar of life. Singh recalled Guru Gobind Singh parted ways with Hinduism and founded a new religion, Sikhism, 313 years ago to start worshiping one god, instead of many idols.

He complained 200 properties belonging to Sikhs could not be reinstated in Kabul, Nangarhar, Kandahar, Helmand and Ghazni. No action has so far been taken against the illegal grabbers, who Singh said were powerful individuals.

He said their children continued to be deprived of education. No new school for the minority children could be built over the past may years in the entire country, he complained.

There is no special school for Sikh children in Afghanistan, except the one in Helmand. Singh said they also lacked a proper place for cremation

Sikh temples chief, Hakeem Jasbir Singh, said arrangements for the holy bath in Sultanpur’s streams had already been done. The 42 hours recitation from their holy book would start simultaneously in the two temples in Jalalabad. Special prayers would be offered for development and peace in the country.

There were 64 Sikh worship places across the country three decades ago, but only nine of them exist today.