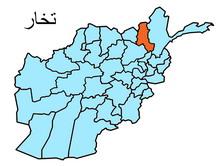 Waisuddin was invited by one of his friends to dinner on Saturday night, when unknown armed men broke into the house, killing him and wounding his guard, the provincial police spokesman said.

Abdul Khalil Aseer told Pajhwok Afghan News three suspected people had been arrested in connection with the murder. Another jihadi commander, Mohammad Tawil Azimi, had also been invited, but he survived the attack, said Atiqullah, a resident of the area.