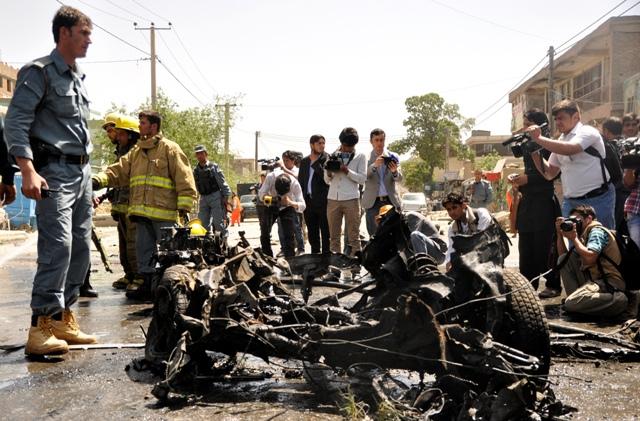 KABUL soldiers and civilian contractors, were killed and 42 others wounded on Thursday when an explosives-laden car ploughed into a foreign military convoy in Kabul, officials and witnesses said.

But a credible security sources confided to Pajhwok Afghan News all the six foreigners killed were Americans. The US military contractor DynCorp International confirmed in a statement the four civilian contractors were its employees. Three others were wounded in the attack.

Nine Afghans civilians were killed and 39 others wounded in the attack that happened close to the residence of a parliamentarian in the Shah Shaheed locality at around 8am when the ISAF convoy was passing the area.

Public Health Ministry official Dr. Kabir Amiri confirmed the Afghan fatalities, including two children, were killed and 39 others injured. Mostly civilians, the wounded were under medical treatment in various Kabul hospitals. The dead were charred beyond recognition.

Kabul police chief Brig. Gen. Mohammad Ayub Salangi told journalists at the scene although the numbers were not immediately known, the powerful blast caused casualties to civilians and those carried by the convoy.

Gen. Salangi added 30 vehicles, including two of foreigners, and dozens of houses were destroyed in the bombing. Columns of smoke billowed from the site in eastern Kabul, he added.

Meanwhile, President Hamid Karzai strongly denounced the suicide bombing. “Terrorists and the enemies of peace kill civilians in such ruthless attacks in residential areas,” he said.

In a statement from his office, Karzai offered his condolences and sympathies to the victims’ families and said the enemies of Afghanistan did not let people live their routine life.

The Ministry of Foreign Affairs said the blast had caused civilian casualties, but provided no figures. A Pajhwok reporter at the scene said Wolesi Jirga member Gul Padshah Majidi’s residence and an Azizi Bank branch were located in the area.

The area was cordoned off by security forces, said witness Mohammad Pervez, who added: “The explosion was very powerful. I saw many injured people lying on the ground as I came out of my house.”