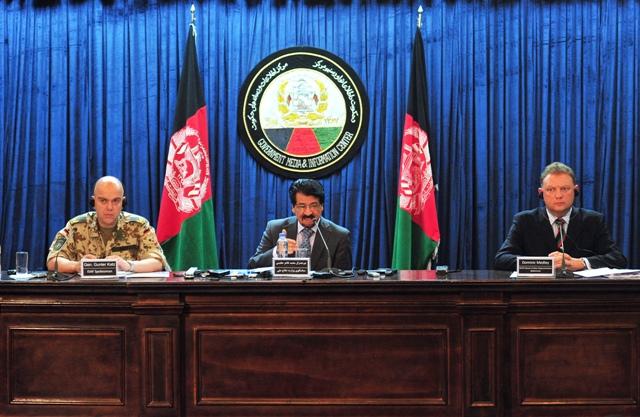 KABUL had been closed to send their students for suicide attacks on this side of the border.

Gen. Zahir Azimi told reporters in Kabul the madrasa students had been tasked with carrying out suicide and bomb attacks, saying there had already been increase in Taliban attacks.

He said religious schools in Pakistan involved in sending their students for suicide attacks to Afghanistan had gone on vacations.

Citing intelligence information, Azimi said the schools had been closed as part of the conspiracy to send suicide bombers in a great number to Afghanistan. However, he said the Afghan forces had the ability to prevent the attacks.

ISAF‘s mission in Afghanistan. He said 85 percent civilians were killed in Taliban attacks this year.

Azimi said the Taliban had launched a propaganda that they were winning the war in Afghanistan and would gain power after foreign troops’ pullout.

He accused neighbouring countries of supporting the Taliban in their propaganda war in order to promote their own interests.

Azimi said the Taliban fighters had lost their morale to enter a face-to-face fight with Afghan forces. He said the rebels had lost ground in most parts of the country.

The defence ministry official said Afghan forces conducted 90 percent unilateral operations against insurgents and would conduct cent percent operations on their own by June this year.

He said the security situation in areas transferred to Afghan forces control had improved compared to the past.

Azimi also talked about challenges facing the Afghan air force, saying one of the major problem was the lack of cargo planes.

He said the US had promised providing four C-130 cargo planes by the end of 2014, when the Afghan army would be delivered some Russian aircrafts.