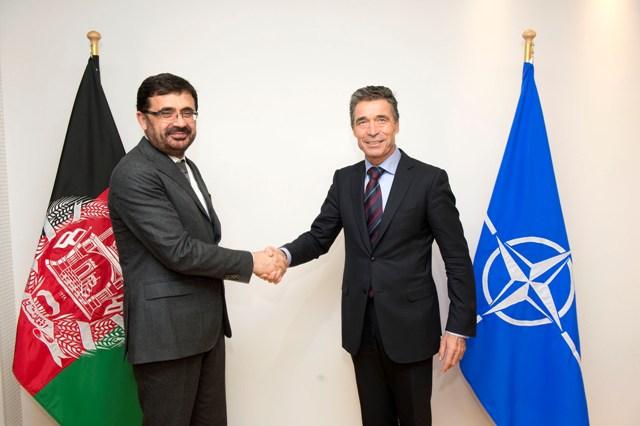 BRUSSELS (PAN meeting here he could assure them that the Bilateral Security Agreement with the US would be signed in “good time.”

NATO foreign ministers meeting in Brussels urged President Hamid Karzai to sign the security pact, with Secretary General Anders Fogh Rasmussen saying the alliance was hoping to stay in Afghanistan into 2015 but needed President Karzai’s “timely” signature on the pact outlining the terms of a smaller advisory force.
Osmani said he had the privilege to extend his government’s official invitation to NATO for the initiation of formal negotiations on a Status of Forces Agreement for the post-2014 NATO presence in Afghanistan on the BSA model.

“We are prepared to start these negotiations anytime and conclude them rapidly. Let me state that we regard continuing cooperation with NATO a necessity and stand ready to formalize this partnership for the post-2014 period.”

He said based on the BSA model between Afghanistan and the US and in the context of a Status of Forces Agreement, the Afghan government could agree on a set of principles, ensuring continued legal presence of NATO while upholding Afghan sovereignty, independence, territorial integrity, national unity and Afghan ownership.

He said the historic consultative Loya Jirga had overwhelmingly approved the draft text of the BSA and at the same time underlined their desire for peace and security in the country.

He said by strongly endorsing the BSA, the Afghan people once again demonstrated their profound desire for a true friendship and a lasting security partnership with the US.

He said the grand assembly underscored rightful aspiration for peace and security and sent the clear message that the BSA must furnish necessary assurances for peace in Afghanistan and ensure the safety, security and dignity of the Afghan people in their homes.

Osmani said based on the clear and unambiguous recommendations of the loya jirga, the Afghan government was seeking assurances from the US on efforts to propel Aghan peace and reconciliation efforts forward and put an end to military operations on Afghan homes in accordance with the text and spirit of the BSA.

He said the Afghans were seeking those specific assurances because they wanted the agreement and the strategic partnership based on them.

Osmani said Afghans were already strengthening their sovereignty and national ownership through the ongoing transition process, and Afghan soldiers, police and other national security forces had proven both the strategic and tactical success of the transition process.

“The successful implementation of Milestone 2013 in June this year, which marked the full transfer of the lead for all combat operations to Afghanistan, demonstrates the determination of the Afghan nation to take our own affairs into our own hands and underlines the capability of our national security forces to provide security for their compatriots and defend the country against external threats”.

He said Afghan forces not only maintained control and security across the country, they also driven the enemy from some areas where they had previously established a presence.  “Most importantly, security in most transitioned areas has improved.”

He said they realized successes in security transition had come at the price of increased casualties among Afghan national security forces as part of their unshakable commitment to fight for and, where needed, to give their lives for an independent, sovereign, free, democratic and developing Afghanistan.

“The Afghan people are prepared to continue our just struggle against terrorism and violent extremism in our vital region; however, we will continue all our efforts through all possible channels to seek peace and reconciliation with the armed opposition.”

In this context, he said they would continue their dialogue with Pakistan to return to dialogue and negotiations for peace and security in Afghanistan.

“We continue to draw all sides’ serious attention to the inescapable fact of peace in Afghanistan being a precondition for peace, security and prosperity in the entire region.”

He said they also expected that the US and strategic partners in NATO would undertake all possible and necessary practical efforts through national, bilateral and multilateral channels involving Afghanistan, Pakistan and any other country that could play a constructive role in order to help the Afghans start a meaningful, substantive peace process between the High Peace Council and the Taliban.

On the April elections, Osmani said the vote offered a serious test to the strengthening of Afghanistan democratic process and the continuity and consolidation of their young democracy.

“Precisely four months ahead of polling day, almost all the key signs are positive and boost hopes for success.”