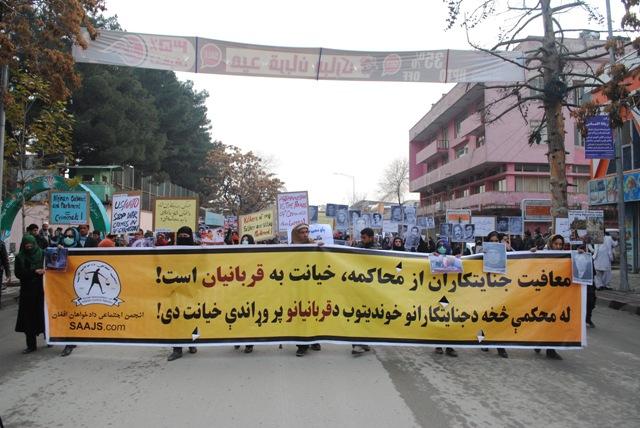 KABUL and US forces for their involvement in Afghan civilian deaths and calling for war criminals to be brought to justice.

Organised by the Social Association of Afghan Justice Seekers (SAAJS), the rally that started from Zanbaq intersection peacefully dispersed at Haji Yaqub Square, where about 300 people had gathered.

The demonstrators chanted slogans like “We want justice,” the criminals should be prosecuted,” “the mass killers should be identified,” “democracy without justice is meaningless,” “Afghans demand justice.”

They condemned American forces and called for an immediate end to civilians’ harassment at their hands.

SAAJS head Waida Ahmad told Pajhwok Afghan News the rally was aimed at marking the national victims day to commemorate the 30 years of civil unrest and the suffering of millions of victims.

He alleged a number of parliamentarians and presidential candidates had been involved in war crimes and mostly those currently in power had blood on their hands of innocent civilians.

“American forces have bombed the homes of Afghan and they have killed civilians during the 12 years old war in Afghanistan,” he said.

They said the NATO had violated human rights in Afghanistan the way the Taliban did during their regime and the Soviet Forces during their invasion.

At the end, the protestors issued a statement that said they wanted an immediate sacking of government officials, who had been involved in war crimes during the Soviets occupation and the Taliban regime.

It said all criminals, who committed crimes against humanity over the past three decades, should be tried by a neutral international court.

The protestors, while holding photos of victims killed during the Russian invasion, said they took out the rally to mark the International Human Rights Day celebrated Dec 10.

They condemned the mass killings of innocent Afghans during the former Soviet Union attacks and purges under the Russia-backed communist regime in the 1970s.