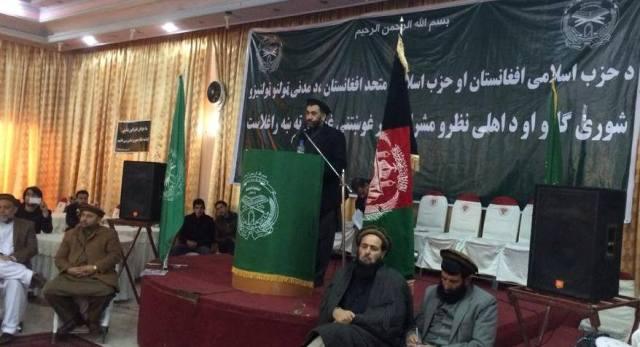 KABUL (HIA) on Sunday denied supporting presidential candidate Dr. Abdullah Abdullah in the April elections, hinting at an early decision on swinging behind a runner.

The announcement by the third HIA splinter group (Muttahid Afghanistan) came at a gathering held under the leadership of Paktia Governor Juma Khan Hamdard in Kabul.

Photos and names of participants of the gathering have been posted on Facebook wall of a social network in the name of Juma Khan Hamdard.

Samoon said it was a consultative gathering to confer on how to play a transparent role and support a particular candidate in the upcoming presidential elections.

However, he said the meeting participants decided they and their supporters would not back Abdullah in the elections.

He said the meeting also decided to call a big gathering of supporters at the Loya Jirg’s tent and make an announcement as to which candidate they would lend weight.

The meeting authorised Hamdard and Sabawoon to reach a conclusion, which would be acceptable to all, Samoon said.

Non-violent HIA faction led by economy minister Abdul Hadi Arghandiwal has announced its support to Abdullah, with the faction’s leader Khan Mohammad contesting the ballot as one of Abdullah’s running mates.

Another HIA leader Qutbuddin Hilal, who is contesting the presidential elections as an independent candidate, says he has the backing of HIA faction led by Gulbadin Hekmatyar.

But a Hekmatyar-led HIA leader Ghairat Baheer has said their group has not yet announced its support to a particular candidate.