TEFA all set to deploy observers for elections 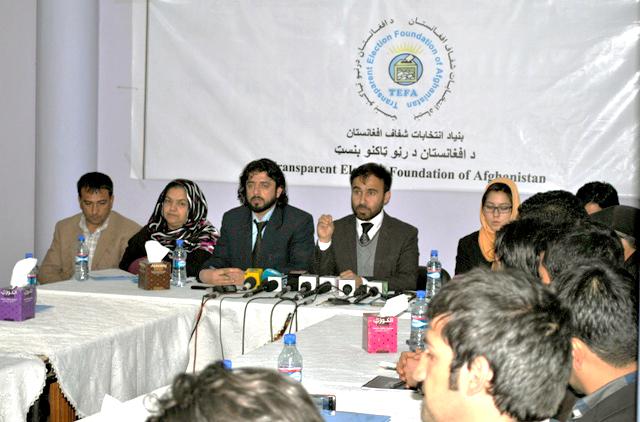 TEFA all set to deploy observers for elections

KABUL (TEFA) on Saturday said it was all set to deploy 5,000 observers to monitor the April 5 presidential and provincial council elections.

In a statement, the watchdog said the trained and proffestional observers,  including 1,600 females, would do their job in all provinces in collaboration with 37 local civil society organizations until votes were counted and the final results, including those of complaints and objections, were announced.

TEFA plans to focus on those polling centers; in particular women allocated stations, which were covered in the previous elections.

TEFA held a three day long meeting with its provincial coordinators found out that there are still serious concerns before the electoral process which undermine the participation of people, presence of observers and the legitimacy of: the election process, if not addressed properly and timely.

These concerns include security remains a major challenge in some parts of the country, which could hinder people to largely participate in elections.

TEFA has found that many polling centers approved by the security institutions remain under different levels of security threats in 62 districts of 15 provinces.

Civic education and public awareness remain invisible in a number of villages and districts and a large number of people lack information on elections.

TEFA urged upon the security institutions to practically provide security for the polling centers and to provide a safe environment for voters, workers and election observers.

It asked that the Independent Electoral Complaints Commission (IECC) should open and activate all of its provincial offices immediately, so that people could easily and timely file complains.

TEFA is an independent and national organization, established to boost the effective role of civil society organizations in providing civic education, electoral reform, advocacy and professional and impartial observation from various stages of the electoral process.

TEFA observed the previous presidential, parliamentary and provincial council elections and played its significant role as a civil society organization to ensure the transparency and legitimacy of the democratic process in Afghanistan.