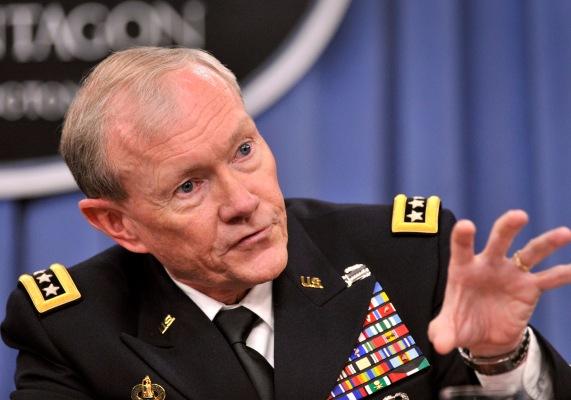 Outgoing NATO) leadership to Army Gen. John Campbell at a ceremony in Kabul.

Gen. Campbell arrived in Afghanistan last week to take over as top US and NATO commander in the war-torn country.  The tentative date for the change of command ceremony is Aug. 26 (tomorrow).

After being promoted as general, Dunford assumed the duties of assistant commandant of the Marine Corps on October 23, 2010. He has already been confirmed by the Senate as next Marine commandant, replacing Gen. James Amos.

Dempsey told the journalists accompanying him the Pentagon had made plans authorising US troops to stay in Afghanistan beyond the end of 2014 if a security pact between Kabul and Washington was not signed soon.

The US would need about four months to withdraw all troops and equipment from Afghanistan if the Bilateral Security Agreement (BSA) was not signed, he said. However, he explained, the process could be expedited.

“We’ve got our own planning mechanism in place should this thing extend a little further than we hoped it would,” the Associated Press quoted him as saying.