Paktika, Ghazni refuges suspected of having kinks to IS 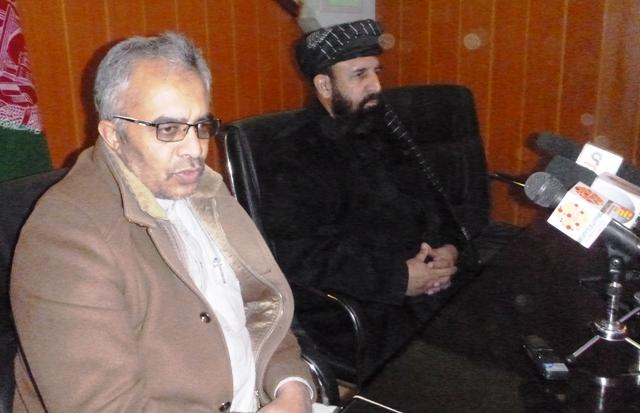 Paktika, Ghazni refuges suspected of having kinks to IS

GHAZNI CITY (Pajhwok): Some of the 1,050 families that recently migrated from Pakistan and other countries to southern Ghazni and Paktika provinces belong have links with the Islamic State (IS), Afghan officials claimed for the first time.

During a joint press conference, governors of Ghazni and Paktika provinces confirmed on Monday the families including their women and children were seen carrying black flags and striking fear into residents’ hearts.

“Some of them have come from Pakistani religious schools and are linked to the Taliban. I think it is a sinister conspiracy. We are investigating them and would share the results with the central government,” he said.

Akbarzada said he had received intelligence information that more terrorists might try to sneak into the areas. Ninety percent of them were Taliban militants fighting against Afghan forces in the past, he continued.

His Paktika counterpart Abdul Matin Karim also said about 850 new families –posing as refugees — had entered the province. “We believe they are not genuine refugees; they have come here to fuel insecurity,” he remarked.

Matin said the families included Arabs, Pakistanis and Chechens, who forced residents to leave their homes. “These people are spreading fear and terror in the area,” the governor charged.

The households are living in Nawbahar, Aab Band, Nawa and Shamalzai districts, close to the Pakistan border, where the security situation has been unstable. Security organs are probing the families.

An influential individual from Nawa district, wishing not to be named, told Pajhwok Afghan News a number of armed men with links to the Islamic State had infiltrated into his area last week.

“No one knows their language and they are wearing masks and black clothes; they carry black flags inscribed with Allah and Mohammad,” the source said. He did not provide details.

Previously, some reports said a number of masked armed individuals had sneaked into the Kajaki district of Helmand province, where they fought against Taliban. But the government has rejected reports of IS activities in Afghanistan.

Mullah Abdul Rauf, a militant leader, is accused of recruiting fighters for the group, which controls large swathes of Syria and Iraq. Rauf was a corps commander during Taliban’s rule.