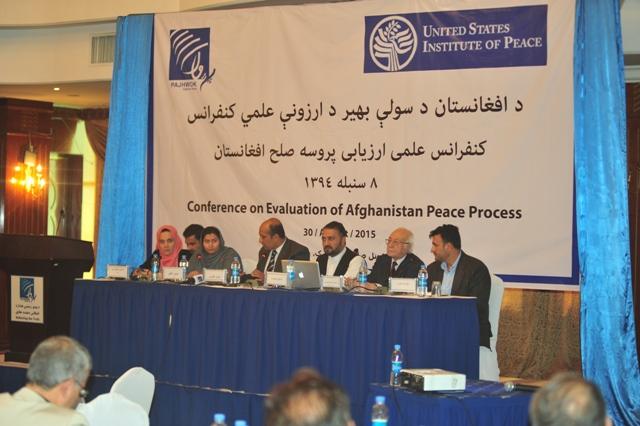 KABUL (Pajhwok): Millions of dollars have been spent under the Afghanistan Peace and Reintegration Program (APRP), a government initiative, but many people are unhappy with its outcome as they say the conflict has further intensified.

By joining the APRP, designed, implemented and executed by Afghans to provide a way for insurgents to stop fighting and rejoin their communities with dignity, ex-rebels make the commitment to renounce violence, sever all ties with the insurgency and abide by the Constitution of Afghanistan.

This includes the acceptance of the government of Afghanistan’s laws on women’s rights. Former president Hamid Karzai decreed the programme in compliance with the advice from the National Peace Advisory Jirga with financial support from the international community.

Rolled out in all provinces, the High Peace Council (HPC), a government entity tasked with negotiating peace with insurgents, has been leading the programme since its launch five years ago. The 69-member HPC has peace committees in all provinces except central Panjsher province. The peace committees, which operate under the HPC head office in Kabul, have 888 members and 142 staff members. 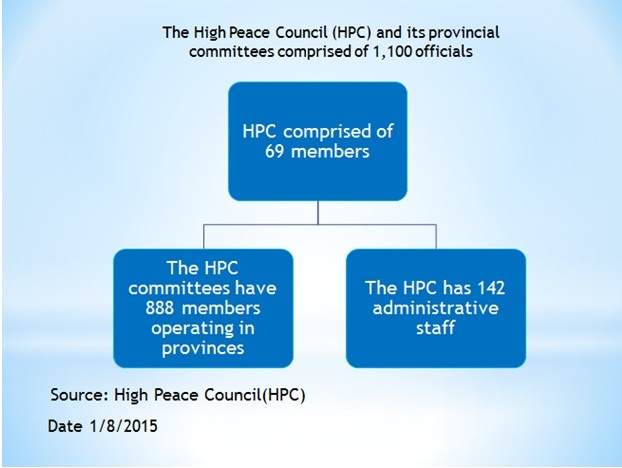 Expenses: Though millions of dollars have been spent on the peace process, but information in this regard has largely been denied to journalists. According to the Afghanistan Research and Evaluation Unit (AREU), an independent research organisation based in Kabul, 782 million US dollars had been set aside for the reintegration programme.

The United Nations Development Program (UNDP) writes that donor countries assisting the programme have been divided into three categories. 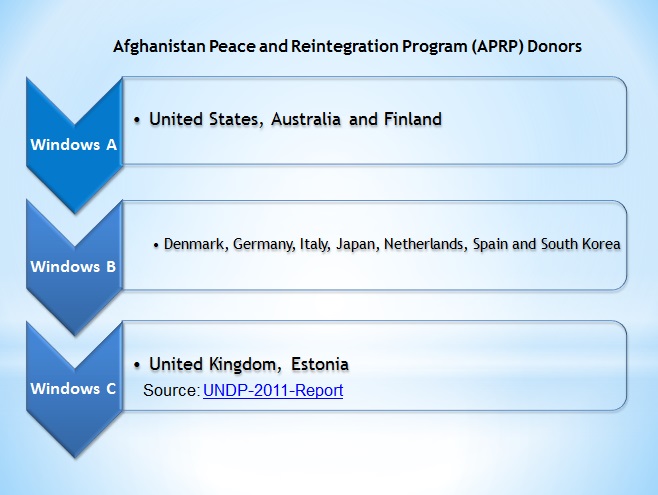 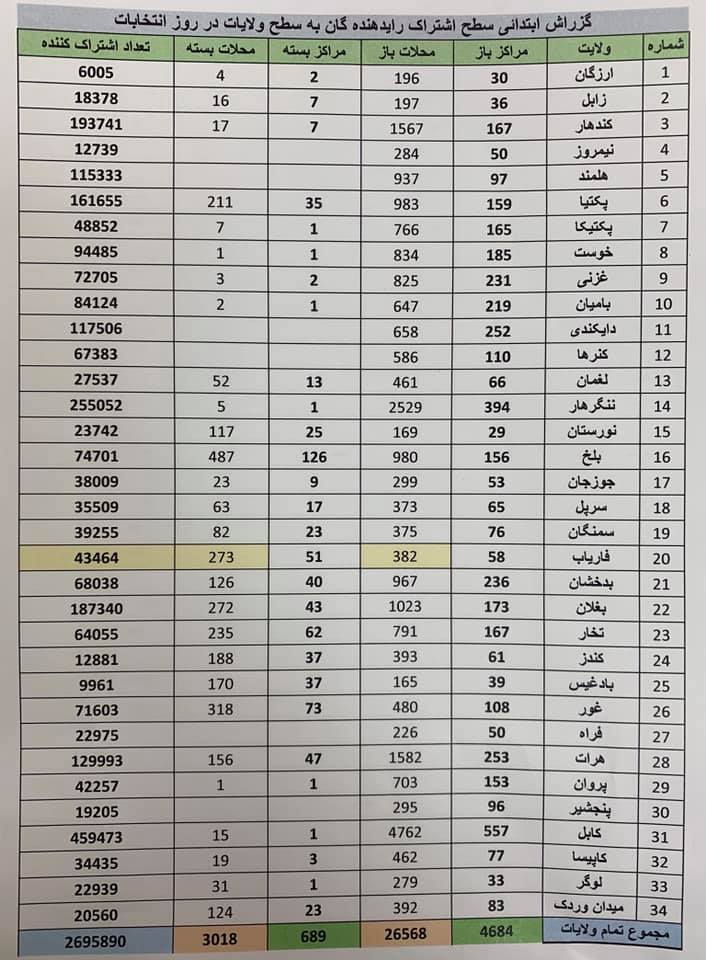 The UNDP also writes the second category donors have assisted the APRP programme with $131.7 million.

But advisor with HPC on foreign relations Mohammad Ismail Qasimyar said the HPC expenses stood at nearly $3 million a year.

He said funds from donor countries were being used through various ministries and departments in peace related projects.

“Rumours being circulated among the people and the media that millions of dollars had been spent on the council are completely baseless. The HPC budgets during the past four or five years were $2.5m sometimes $2.6m and $2.8m below $3 million. These budges are less than received by other departments and ministries. The funds were used to arrange gatherings, meetings, conferences, direct and indirect contacts.”

He said claims made regarding huge spending were about the amounts which had been directly given to on-budget line ministries.

“I will cite a practical example; the US gives $50 million to the Rural Development Ministry for its development projects and National Solidarity Program (NSP).  Maybe some of the money was used to provide jobs to reconciling militants.”

The body says the surrendering militants have turned in 8101 weapons, all handed over to the government. More than half of the weapons were collected in Herat, Baghlan, Ghor and Nangarhar provinces.

Figures available with the HPC show most of the reconciling militants joined the peace process in western and northwestern provinces and the least in northwest and southern provinces. 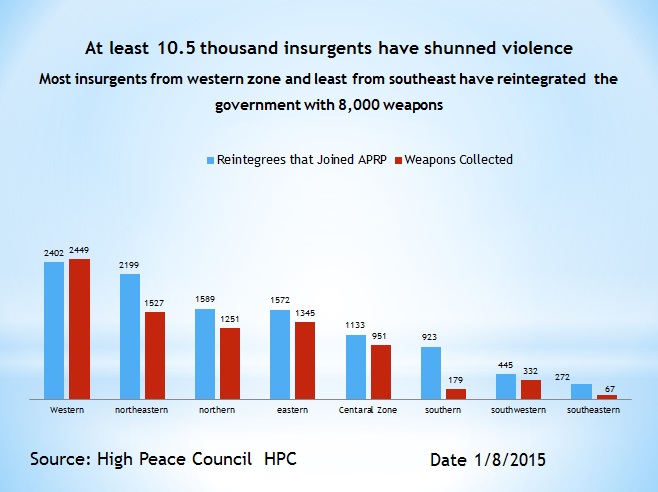 But the reconciliation of these fighters with the government has not helped strengthen the peace programme instead the conflict has further intensified.

United Nations Assistance Mission in Afghanistan (UNAMA)’s annual reports say nearly 47,000 civilians, including women and children, have been killed or wounded during the last five and a half years. They include 16,954 dead and 29,744 injured.

UNAMA’s report showed as many as 1,592 civilians, including women and children had been killed and more than 3,329 wounded in the first six months of 2015 during incidents of violence in Afghanistan. 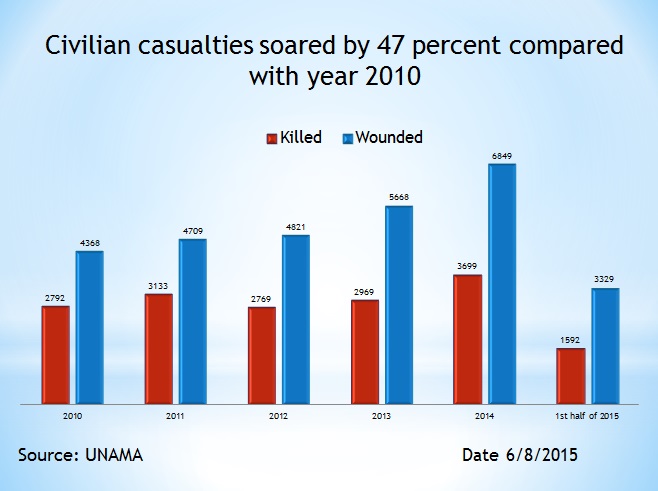 During this period, the warring parties also suffered heavy casualties and even HPC members were not spared.

Former president and the HPC chairman, Prof. Burhanuddin Rabbani, was assassinated in a suicide attacker who posed as peace emissary at Rabbani’s residence in Kabul in September, 2011.

Months later, another key member of the HPC, Arsala Rahmani, was killed in an attack.

Besides these two individuals, the HPC says 33 members of provincial peace committees have been killed in 17 provinces. 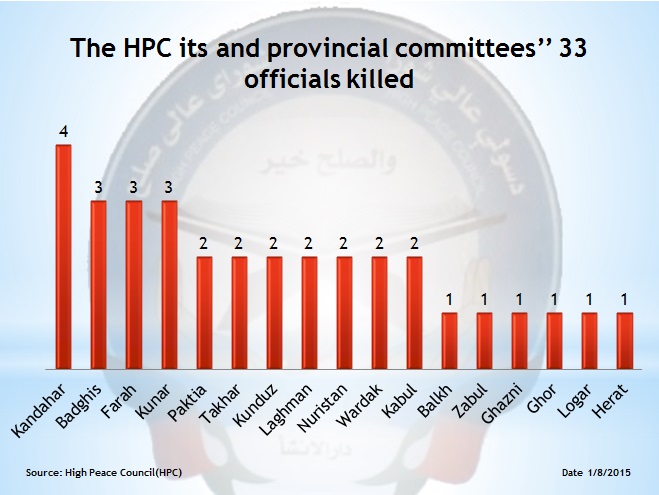 Some Kabul residents say they are not satisfied with the HPC achievement as they cite the increasing casualty toll and growing insecurity in northern provinces.

One of them, Zarin Khan Adil, says: “Millions of dollars have been spent on the HPC and thousands of people compensated in the name of peace, but where is the peace?”

He called the HPC as a symbolic body and its mission far from reality. “We want this peace body to be dissolved, we are no way support of the council.”

Similarly, another resident of Kabul City, Ismail Totakhel, said the HPC lacked an organised and effective strategy to advance the peace process and it worked like an opposition team. He urged the government to dissolve the council.

Law and political science teacher at Kabul University Shehla Farid also says the HPC has no gains and money spent on it has been wasted. 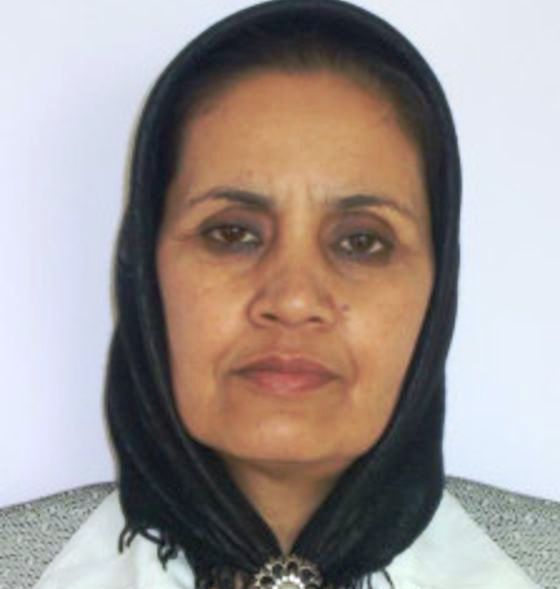 “If you ask a common man about the achievements of the HPC and particularly if you ask the war-affected families, they will clearly say the council has achieved nothing.”

She said the reconciliation of the nearly 10,000 militants was not an achievement because most of them had returned to the battlefield.

She said they would call it achievement if the surrendering militants did not return to their comrades.

The university teacher said the HPC offices in Kabul and provinces consumed enough budgets despite being inaccessible for people and without any significant achievement.

She also criticised the HPC’s composition and said: “Former government officials and politicians did not take into consideration the effectiveness and popularity of individuals before appointing them as members of the council. There is no criterion for the appointment of HPC members.”

Shehla Farid said warlords had been appointed in the HPC, who saw their survival in prolonging the conflict.

On failure of the peace process, she accused foreign countries, particularly Pakistan, of being behind the conflict in Afghanistan and said the HPC had no comprehensive strategy to follow.

Insisting on an effective strategy for peace, she said: “I appeal to the political leaders of the unity government to dismantle the High Peace Council as soon as possible for failing to achieve any progress.”

She said the money being given to the HPC should be instead spent on the wellbeing of victims of the conflict.

But Mohammad Ismail Qasimyar said the HPC had many achievements and the peace process could not succeed due to foreign interference. He said Pakistan’s spy agencies handled the insurgents.

“Those who complain about no achievements think the peace process is a simple job. Actually they don’t fully understand it. They think we will say we want peace and Mullah Omar will say I am coming, no this is not that simple, it is a complicated job. Many countries have stakes and until all these countries in the game do not fully cooperate with each other, the problems will remain.” 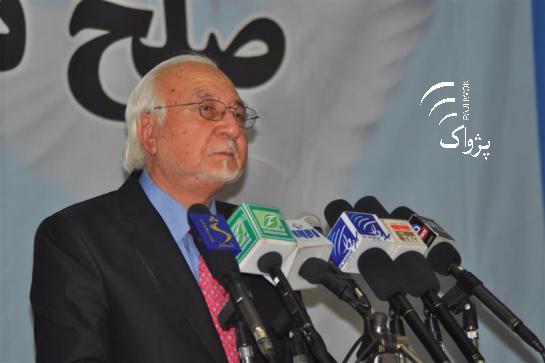 He said those commenting on the peace process should first understand problems plaguing the process.

Qasimyar said the HPC was created in order to resolve the Afghanistan conflict through dialogue, but the Taliban responded with violence and killed the HPC chairman, Burhanuddin Rabbani, and others.

He said they failed to hold talks with Taliban’s deceased supreme leader Mullah Omar because he had been living in Pakistan and the country’s premier spy agency possessed the keys of peace.

About the presence of warlords in the body, he said: “Those who had fought should make peace as well. This is what our political and social structure demands. If our jihadi leaders oppose the peace process, peace cannot be achieved. Their presence in the council is necessary and they can resolve problems.”

Qasim also disputed the claim that most of the reconciled militants had returned to the past, saying a fewer number might have returned, but those who have joined the process were happy with the HPC.