SOM a bridge between past & future pledges: Haysom 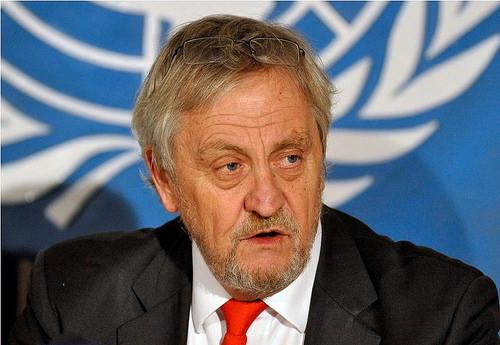 SOM a bridge between past & future pledges: Haysom

KABUL’s reform vision and progress towards realising self-reliance as a “vital part of the bridge between past commitments and future pledges.

In his address to the Senior Officials Meeting (SOM), Nicholas Haysom, the head of the United Nations Assistance Mission in Afghanistan (UNAMA), said “renewing those commitments to demonstrate not only Afghanistan’s needs on-going support, but to inspire confidence in those that have promised to walk with Afghanistan as it takes on its difficult challenges.”

Delegates from key donor states and organisations attended the event co-hosted by UNAMA with the Afghan authorities.

The UN officials characterised the event as an important meeting between international donors and the Afghan government.

Afghan Cabinet ministers and representatives from more than 57 countries and international organisations attended the summit. Chaired by President Ashraf Ghani, the summit started on Friday evening and resumed on Saturday in Kabul.

The Afghan government’s activities after the 2014 London Conference, national stability, jobs, opportunities and challenges in Afghanistan face, efficiency of the foreign aid, development of infrastructures, elections, efforts about corruption, human rights, good governance and other issues were discussed at the meeting.

In his speech, Nicholas talked about achievements the Afghan government had achieved so far since the London moot.

After the conference, he said, the new government had appointed a professional Cabinet, made progress in the fight against corruption and established the electoral reform commission and the national procurement committee.

“We also reaffirm our commitment today to Afghanistan’s efforts at realising self-sufficiency,” he said, urging the meeting participants to help Afghanistan preserve the past gains and improve its economy.

He said the Kabul meeting was not the last one, but in fact it was a bridge between the past commitments and future pledges because improvement was needed in the living conditions of Afghans.

The UN official asked the Afghan government to be prepared for the follow-up meet in Brussels next year and implement reforms in different sectors ahead of that meeting.