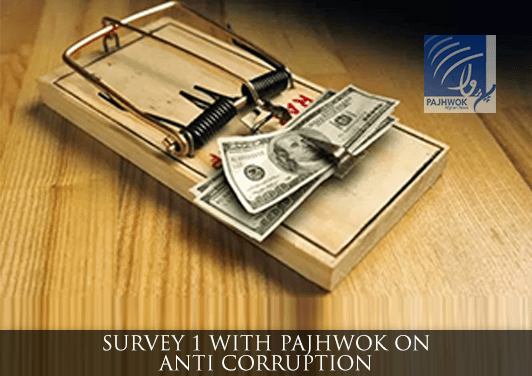 Most of individuals in the online survey, a joint venture of the European Union Delegation in Afghanistan and Pajhwok,   believed corruption had increased during the past one year, some slammed government’s response to corruption and others accused the national unity government of lacking a strong political will to eradicate the menace.

Over 50 percent of the respondents claimed to have witnessed events of corruption and they saw the culture of impunity behind the growing corruption. But 43 percent respondents hoped corruption would decline with the passage of time. Most of them demanded severe punishment for corrupt politicians and businessmen.

It was the EU Delegation and Pajhwok’s first joint online survey on corruption, in which 1,038 individuals participated, with 32,900 persons receiving survey forms to add personal views about corruption.

Of 32,900 individuals who received the survey forms, 668 were able to fill out them. Among them, 72 percent were less than 40-years-old. About 82 percent participants were male and five percent were women, the remaining did not write about their sex and age.

Ninety-two percent of the respondents termed corruption as a big challenge, 76 percent called it bigger and 17 percent a biggest challenge for the government to deal with.

Abubakr Raz, finance manager at United Brothers Transport Company in Kabul, said administrative corruption was a greater challenge for the government and the people of Afghanistan. If it remained a challenge and could not be wiped out, Afghanistan would never be developed, he believed.

He said: “Qualified and talented individuals are jobless, government’s revenue is not great, the security situation is deteriorating and more people are joining insurgent ranks. Unemployment is on the rise just because of corruption in the government.”

Raz said billions of US dollars and global community’s aid coming to Afghanistan over the past decade had been wasted to corruption and the war-torn country did not take full advantage of the huge money.

He warned if corruption was not controlled and eradicated, Afghanistan would lose its trust among the global community, which would ultimately lead to a halt of international aid.

According to the survey, 69 percent people claimed corruption had increased during the past one year and six percent said corruption declined during this period.

Aryana, a resident of Bagh-i-Bala locality in capital Kabul, said the 50-50 share of power resulted in massive corruption in different government departments.

Another participant, Abid Sahar, wrote: “Corruption existed earlier as well, but after President Mohammad Ashraf Ghani’s coming to power, everything was destroyed due to corruption. I can just pray to Allah to save us from these problems as we can’t do anything.”

The survey showed the country’s justice system has been hit-hard by administrative and financial corruption. Besides civilian authorities, corruption also exists in security institutions.

Ahmad Javed, a resident of capital Kabul, said corruption had reached the peak in the justice sector.

“Corruption still exists in the justice sector and therefore Afghanistan is every year ranked among the most corrupt nations. We hear from relatives and family members that corruption is increasing each day in government,” he added.

According to the hard copy forms filled, most individuals said corruption was on a high scale in the judiciary, while a small number held different views.

Abdul Karim Inayat, a resident of Kabul, wrote: “Why did Pajhwok indicate justice sector as the most corrupt institution, isn’t there any other government institution as far as corruption is concerned.”

It was surprising that most of the individuals called the justice department as the most corrupt department in the survey.

Habib Rahman, a resident of Kampany locality, said: “I have personally witnessed financial corruption. Everybody in the government acknowledges that corruption is a huge challenge. So if I am a witness or not it is the fact that corruption exists and is impeding the progress of our country.”

In the survey, half of the respondents claimed they had seen officials demanding bribes, while 50 percent more said they had noticed corruption and nepotism in hiring on key government posts.

Maryam Hussaini, a resident of Karti Seh locality, said a vacant post was announced at the Ministry of Public Health (MoPH) and her sister applied for it, but the Human Resource Manager told her that there was no vacant post.

She claimed a vacant post was there, but the application of her sister was rejected because she had no reference.

A majority of the survey participants were not satisfied with government efforts at eradicating corruption, while eight percent expected the government was doing its best to eliminate corruption.

Javed Ghanizada, a businessman, said: “Notoriously corrupt individuals are there in Afghanistan. The fight against corruption is a lie. The Kabul Bank, AISA, Urban Ministry, the e-NIC deparemtn and municipalities are rife with massive corruption.”

According to Pajhwok survey, three out of five respondents believed that the government has no political will to combat corruption and one person opposed the idea.

Ahmad Shah, a resident of Macroryan locality of Kabul: “The government has no political will to eliminate corruption and government’s programmes in this regard are hollow slogans.”

He acknowledged many officials had been arrested on corruption charges, but said none had been prosecuted so far. For example, he said, the ministries of education, public health, mines, defence and others had so far taken no concrete measures to fight corruption.

Eight among each 10 persons said the culture of impunity was a huge challenge in Afghanistan, but a few called it ‘not a big challenge.”

A student at the Kabul Medical University, Nazanin, said “impunity is 100 percent a huge challenge in the fight against corruption. In such a situation, corrupt people are encouraged to do more corruption.”

A resident of Kampany area of Kabul, Habibur Rahman, said “As long as powerful men are not forced and laws are not enforced on them, corruption will remain. Before no one would support criminals, but now it has become a trend to support them. Whenever a crime happens, some people oppose it and others support it.”

Suggestions for resolution to the issue:

Among the suggestions on how to prevent corruption, the most important one was prosecution of corrupt people. These people suggested more than 12 solutions to the problem.

“Corruption was inherited from Hamid Karzai government and it would continue until all corrupt people of the Karzai’s regime are not punished,”  Shaheen Abbas said.

Another respondent, Hidayatullah Arbab, said “unfortunately corrupt people are our friends and colleagues, so we can’t fight against them. They are powerful in Afghanistan and ordinary people like us cannot control them.” Until the law is not enforced on all equally, corruption would continue, he said.

Another respondent, Abdul Hadi Rahimi, said the government alone and without people’s cooperation could not fight corruption.

However, Massoud Ahmadzai said it would take 30 years to make corruption a history because the menace widely spread over the past 15 years.

“I think until the whole system is not changed into a computerized one, the problem of corruption cannot be solved,” he suggested.

According to the survey, most people complained laws are not enforced and corrupt people continue to roam freely, but some respondents opposed the idea.

Maryam Husaini said impunity culture is a huge challenge in the fight against corruption and if there was no such culture and corrupt people get convicted, the problem would be reduced.

Most of the respondents were optimistic that corruption level would decline over the next three years, but some did not expect such a miracle.

Mohammad Younus Mihrin said it was very difficult to banish corruption which would infect the entire body of the government in the next three years.

Deputy presidential spokesman, Shah Hussain Martazawi, said “ I don’t deny corruption in the government, but the president and the chief executive officer have a strong intention to fight corruption and they did many things to fight corruption during the past on year and the struggle will continue in future.”

Members of the anti-corruption council would commence its work very soon and would hear all corruption related cases and would take key decisions, he said.