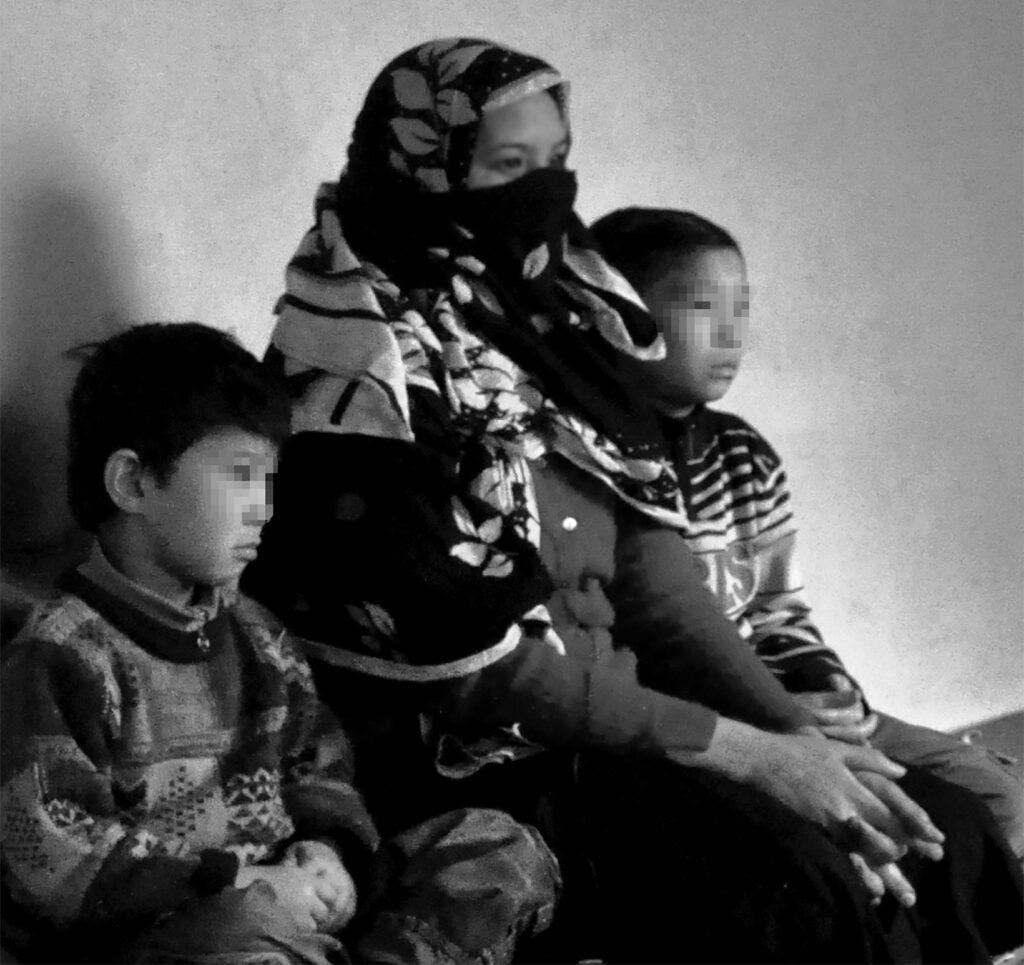 LASHKARGAH (Pajhwok): In Helmand an underage girl who was forced into marriage and now divorced from her husband is living in abject poverty along with five children.

Forced child marriage, where a minor has not genuinely given his/her free and informed consent to enter the marriage and has been coerced into accepting the union, is a prevalent phenomena in Afghanistan. In most cases, young Afghan girls are married off to much older men,  “in exchange” for money to the girls’ family. Due to the use of deception and exploitation of the vulnerability and desperate situations of such families,   these forced marriages constitute cases of Trafficking in Persons, more so if it  involves in underage individual.

Basira (name changed), 32, currently lives with her five children in the slums of Greshk district in Helmand Province.

Holding the tip of her veil with her teeth, Basira told Pajhwok Afghan News: “I was 15 when my father forced me to marry a 40 years old man without my consent against 500,000 afghanis.”

Frustration writ large on her face, she said her husband was also engaged to another minor girl, and as she was too young, her husband decided to consummate the marriage in future and instead married me first.

“He married me and then waited for the other girl to grow up and marry her too,” Basira recalled, lamenting that she had not seen a single day of happiness in her life after marriage.

Basira recounted the tale of her suffering at the hands of her husband and his family, saying that “My husband and the in-laws always physically tortured me and threatened to throw me out of the home.”

She said: “I don’t know why they were treated me so cruelly. I was constantly beat me on slight pretext of  not cooking food to their taste or for not keeping the home tidy. They always looked for excuses to torture me physically. My husband treated me cruelly because my father was too old to help me and also I had no brother, who could come to my rescue.”

To escape the unbearable mental and physical torture, Basira often contemplated committing suicide, however, the very thought of her children resisted her from taking this extreme step.

“I have three daughters and two sons. The violent nature of my husband had also negative bearing on my children. My elder son who is 13 years now has lost his mental balance. He can no longer communicate properly. His condition has added to my burden,” she commented.

Three years ago, her husband divorced her leaving five children to fend alone. Basira is now living in a slum paying 1,000 afghanis as rent. With no support, she is surviving somehow on meager earnings from her work as domestic servant.

“Believe me this amount is too small to meet my needs; sometimes my children and I have to go hungry and at times,” said Basira.

Despite approaching various government agencies for help, however, no help is in sight, she said.

Helmand Women’s Affairs Director, Jamila Niazai confirmed Basira had shared her problems with them over telephone.

“Basira narrated her condition over phone for fear of her husband who she claimed could make her life miserable if he came to know of this,” the official explained.

According to Niazai, her department is not an executive organ and could not help Basira. But she has forwarded her case to the judicial authorities for provide her assistance.

The official termed insecurity, poverty and ignorance as main reasons for forced marriages, which eventually lead to such agony.  She asked for a pro-active stand of tribal elders and clerics to help prevent such marriages.

On the other hand, TiP High Commission member and Director Ministry of Justice in Helmand, Mohammad Tayyeb said that the department has not yet received the case concerning Basira. He noted that “If Basira complains, the department will take immediate and effective measures to resolve her issue.”

The TiP High Commission official confirmed that forced marriages have increased in Helmand but they were making efforts to prevent the practice through public awareness programmes.

Pointing out legal aspects of marriage in Afghanistan law, the official said that rhe legal age of marriage is 16 years for women and 18 years for men under the Afghan Civil Code. Consent of woman is a pre-requisite for a marriage to be considered legal. A marriage without woman’s consent is against Afghanistan’s law as well as against Islamic teachings.

“If  a girl is married without obtaining her consent, it will be considered a forced marriage and an act of Trafficking in Person. In such conditions, if the girl lodges complaint, legal proceedings will be initiated against her father or her guardian,” he said.

He confirmed that number of forced marriages have increased in Helmand but they were making efforts to prevent the practice through public awareness programmes. If Basira complains, the department will take serious steps to resolve her issues.

The Afghanistan Independent Human Rights Commission (AIHRC)’s women affairs director in the province, Fatima Abidi, was critical of parent’s lax attitude towards the welfare of their girls. She claimed that instances have come to the Commission’s notice that some fathers ‘sold their daughters like animals’.  Such an attitude of yields bad consequences.

She said a lot of such cases were referred to them and they had attempted to resolve them through dialogue.

According to AIHRC office in Helmand, 318 incidents have been recorded in the province this year, of which 53 pertained to violence against women.

Civil society leader Khuda-i-Noor Khanzada said they also have received many such complaints of forced marriages. To address the problem, they conduct public awareness campaigns and give legal advice to people.

“We also rope in tribal elders and influential figures in our efforts to end the menace of forced marriage. We refer cases of serious nature to the judicial authorities for resolution.”