Afghan casualties down 40 percent in September

Afghan casualties down 40 percent in September

KABUL (Pajhwok): More than 1,800 people were killed and wounded in hundreds of attacks across Afghanistan in September, indicating a 40 percent decrease in casualties compared to August.

There was no considerable decrease in the number of attacks taking place in September (203 attacks) compared to August when 215 attacks took place in 30 provinces.

In September, among every 23 individuals, about 12 suffered casualties in face-to-face clashes, six in airstrikes, and two each in blasts and targeted attacks and one in suicide attacks. 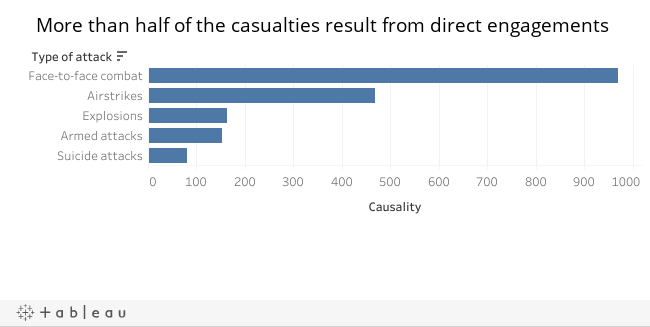 In August, of the 215 attacks, most (82 attacks) took place in four provinces — Helmand, Nangarhar, Kandahar and Jawzjan provinces.

Daikundi, Ghor, and Panjshir provinces, which eluded violence along with Bamyan and Takhar provinces in August, also remained violence-free in September.

Pajhwok received no report of attack in Bamyan for more than one year, but in September, six people were killed during a clash between government forces and Taliban militants.

Reports show, averagely 13 individuals suffered casualties in every face-to -face conflict, 12 people in each airstrike, 11 in every suicide blast, six in every explosion, three in every targeted attacks last month.

Pajhwok  tally shows 1,140 people were killed and another 639 wounded in September’s 203 attacks.

However, Pajhwok could not publish exact figures for the casualties as different sources provided different figures.

In September, most of the attacks 14 each occurred on 10th and 19th of the month, but the bloodiest day was Sept 17, when 160 people suffered casualties. 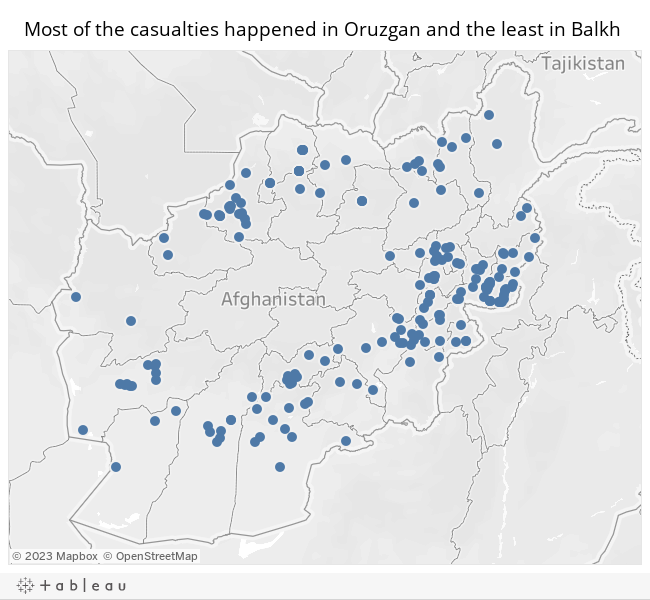 More than half of last month’s casualties happened in Oruzgan, Jawzjan, Nangarhar, Faryab, Ghazni and Kandahar provinces. Capital Kabul was among top 10 provinces in terms of casualties. 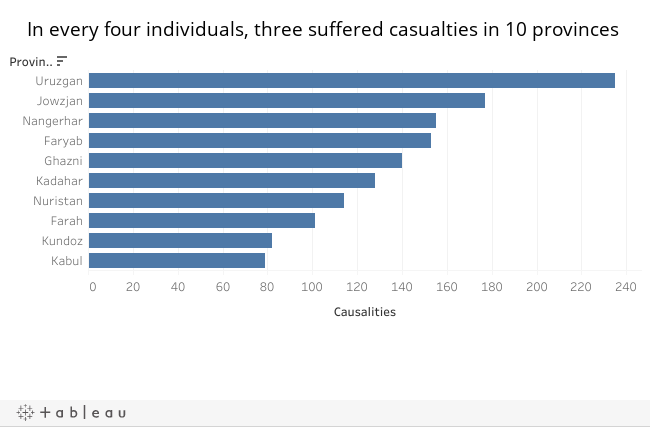 In August, most of the casualties occurred in Helmand, Kandahar, Oruzgan, Paktia, Ghazni, Sar-i-Pul, Nangarhar, Faryab, Herat and Kabul provinces in descending order.

There is also not much difference in September of 2017 and 2016, when 1,792 people suffered casualties that month.

Pajhwok’s monthly reports about casualties suggest that most of the casualties during the first nine months of 2017 were recorded in May, July and August. As many as 11,145 people were killed and 7,936 wounded during the period.

Military analysts told Pajhwok clashes usually decreased in January due to cold weather and in June because of Ramadan and Eid-ul-Fitr.

One of them Abdul Wahid Taqat said casualties in clashes depended on the war’s nature; as if the attack was frontal or coordinated then casualties would also be high.

He said attacks by the anti-government forces in September were not frontal, thus casualties were also less.

“Pakistan was already under pressure from world’s countries for its support to terrorism and pressure on the country further increased when the US announced its new strategy on Afghanistan. Hence, the strong support the country gave to Taliban has reduced and also the Taliban have lost the ability to engage in frontal assaults.”

According to him, the recent surge in airstrikes against rebels by foreign forces has curtailed the insurgents’ inability to engage in frontal war.

He said security forces had been in offensive format last month, crushing the enemy severely.

This is the voice of Afghan war victims. They want the warring sides to hear their voice and stop killing Afghans.

Noor Ahmad, 24, who lives in Musa Qala district of southern Helmand province, said he was serving in the police force in Greshk district and was maimed during a fighting.

Ahmad, who lost both of his legs and eyes in the clash, asked the warring parties “for God’s sake make peace, cease fire and accept each others’ demands.”

“It is very painful to see the Afghans being destroyed and ruined. We are trapped in the wars of powerful states that have turned our beloved Afghanistan into a hell.”

He called insurgents as ‘disgruntled brothers’, saying all Afghans were brothers and should live in peace.

Ahmad’s seven family members have been killed during recent years of the conflict and now he is the only adult male survivor in the family, with blinded eyes and severed legs, to take care of seven widows and their orphaned children.

Ahmad complained the government left him alone in his life’s most difficult time, saying he was not only denied compensation but had to go through a lot of difficulties in pocking his monthly stipend.

A resident of Qaleechabad village in northern Jawzjan province, Rahmuddin, said clashes between government forces and insurgents were ongoing in their area over the past one month.

According to him, all homes in their village have been damaged during the fighting.

Rahmuddin, who fled home 20 days back, has since been living in safe area of the district with his family. “We are tired of fighting, we ask both the sides to cease fighting for God’s and Holy Quran’s sake in order we live in harmony and peace.”