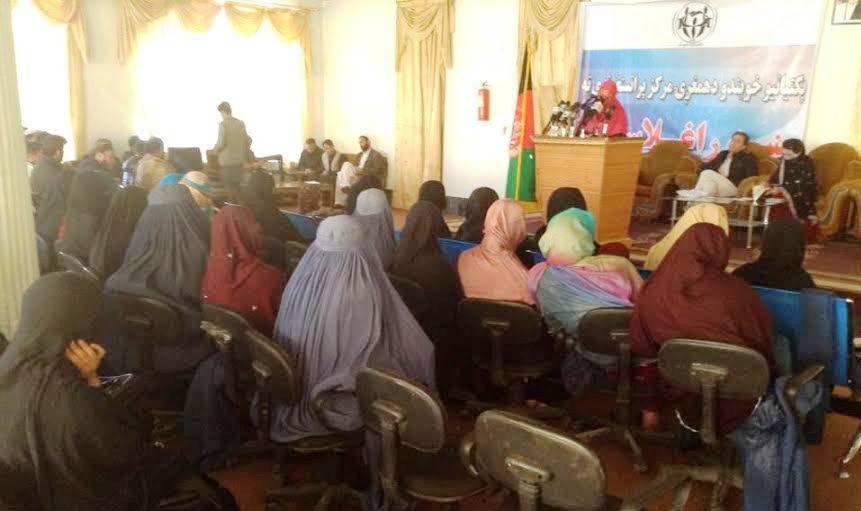 GARDEZ (Pajhwok): The residents and women’s rights activists of southeastern Paktia province say they are not happy and satisfied with the number of women working in the provincial public sector.

Women activist say the presence of female government employees in Paktia is trivial and the gender is denied the opportunity to work.

Local officials say currently 600 women are employed in the provincial education Department, one at the Court and 40 at the Rural Rehabilitation and Development Department.

The activists accuse the Governor Office, Women’s Affairs Department and the Social Affairs and Work Department of not providing women work opportunities.

Najma, a resident of Paktia and law student, told Pajhwok Afghan News that many women and girls wanted to work in different fields but they had been ignored by the government.

“Attention means giving women a proper work environment so they can convince their families and show willingness for work,” she said, asking the government to give women priority in filling vacancies reserved for them.

Khalid Zahin, another resident of Gardez, said women’s presence and their role in government sector was vital and the need of the hour. He said most of the people had now realized that women should work in government offices.

Nargis Hayat, a resident, said she had appeared in a test for the position of the provincial deputy education director (teaching) long ago, but the results were still awaited.

She said in line with a presidential decree, the post at provincial level should be given to a woman.

Zarghona Himmat, the Afghan Women Network head for Paktia, rejected the official notion that women did not appear to apply for government jobs, saying this month alone her office received more than 20 applications from women seeking jobs. The applicants held BA and high school degrees.

Himmat said women had the ability to work in various government fields but they were either denied the required work facilities or intentionally prevented from being recruited, leaving them with no option but to approach the private sector.

“As we know salaries offered by the private sector are not as good as they had been in the past, but still women work there because their recruitment in the public sector has been very weak, it is like someone intentionally does not want women to be given government jobs.”

Similarly, a resident of the Chamkani district, Wahida, told Pajhwok Afghan News that some women worked in government offices in Gardez city, but they were rarely found in districts.

“One or two female government officials are hardly seen in districts,” she said, urging the government to give women their due rights.

While Himmat said so far this year (that ends on March 21) her office had received 40 applications from women seeking jobs in government offices.

Paktia women’s affairs director Nasrin Oryakhel said women’s presence in government departments had increased in the province compared to the past. She said currently hundreds of women were working in the public and private sectors.

Oryakhel said women preferred private jobs due to attractive salaries and more facilities. “Previously women only worked in the women’s affairs department but now they work in the education, health, agriculture, police and others. Women complain about financial problems and that’s why they join private jobs to earn more.”

Women’s affairs section head at Paktia chapter of the Afghanistan Independent Human Rights Commission, Zarmina Shams, said women and men availed equal work chances in the government sector, but what women needed was to improve their education and skills.

She said there were still vacancies reserved for women which remained unfulfilled because of women’s low level of education and lack of experience.

She said this year about 200 females approached her office to be introduced to government offices for vacant posts, but only a few were hired.

He said economic problems forced women to work in offices and those who worked in government offices were denied enough facilities.

“From economic issues to professional fields for example medical and education areas there is a real and strong need of women’s presence in security and other sectors,” he said.

Paktia governor’s spokesman, Abdullah Hasrat, confirmed women were not given enough share in jobs but said suggestions of civil society activists were being gathered to take steps accordingly and under their authority.

“There is strong commitment that women should be provided with a fair share in administration and society without any discrimination,” he said.