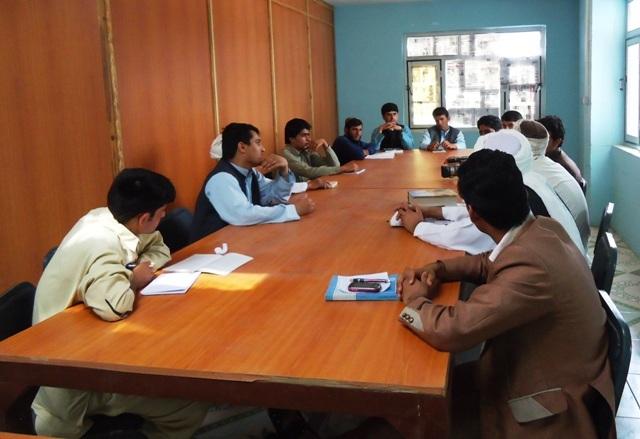 ZARANJ (Pajhwok): Around 1,200 youth have been appointed to different government departments in southwestern Nimroz province over the last two years.

However, some youth continue migrating to Iran and other countries due to joblessness. More than 4,000 youth — or 70 percent of government servants — are working in provincial government departments.

Governor Eng. Mohammad Samey told Pajhwok Afghan News employment of youth had been one of the fundamental objectives of the national unity government.

He claimed the Nimroz administration had been able to hand over the leadership of many government offices to educated youth over the last two years.

“The youngsters are familiar with modern technology and their education levels are higher. Youth are capable of giving better performances,” the governor acknowledged.

Samey revealed 1,176 youth — 35 percent of them women — had been provided job opportunities in Nimroz over the last two years.

Youths were also working in judicial organs and district offices, the governor added.

Youth Affairs Director Hamidullah Baloch confirmed to Pajhwok youth were being employed on the basis of tests and interviews conducted in transparent manner.

“We are in contact with several charities, trying to sustain our focus on creating job opportunities for youth. Some of these organisations have promised us help,” he said.

He said prevention of extortions by irresponsible strongmen at some car stations on the Zaranj-Dilaram highway and depositing transport revenue directly to the government’s treasury were his main goals.

Ahmad is one of the youth working at the governor’s house. Calling the presence of youths in offices effective, he said: “In the present-day world, modern technology plays a key role in the development of a country. Youths of our times are also familiar with technology.”

However, dozens of Nimroz youth still leave the country on a daily basis due to joblessness. An official of the refugees’ department, who wished to go unnamed, said 2,500 to 3,000 people from Nimroz — mostly youth — travelled to Iran and Pakistan through illegal routes.

The source said the same number of Afghans was deported through the port on a daily basis. Only five percent of of Nimroz inhabitants left the country through the port, with the rest coming from other provinces.

But Zalmai, one of a jobless youth from Nimroz, said no fundamental work had been done to support them as many people were still jobless.

He alleged many youth had been appointed to government jobs based on favoritism and bribery.

Hamidullah, a civil society activist, explained although a number of youth had been given jobs in government departments over the last two years, unemployment remains a big problem for youth.

A large number of university graduates cannot find jobs and are forced to travel to other countries, he said. Those travelling to Iran for work return home addicted to drugs. Officials say more than 10,000 people are addicted to drugs in the province.

Mohammad, one of the addicts, said there were no job opportunities in the province. Therefore, he was obligated to go to Iran for work but slipped into addiction there due to workload. Subsequently, he was then deported.

“Our job was difficult. My friends also used drugs. Initially, I consumed opium and then crystal. I have been addicted to drugs for many years and my fate is uncertain,” he remarked.

The junkie asked the government to create job opportunities for youth so they would not be forced to travel abroad for work.