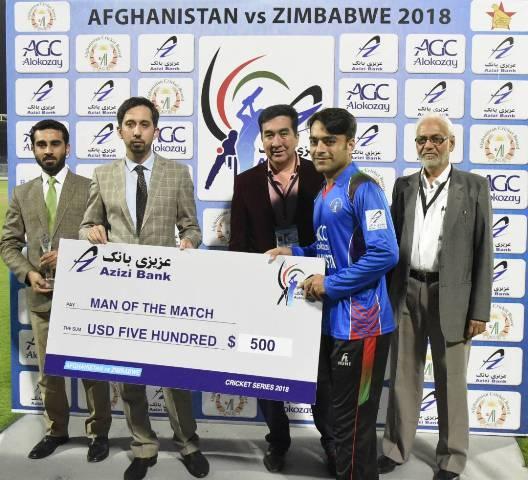 KABUL convincingly routed Zimbabwe by six wickets in the third One-Day International (ODI) in Sharjah, taking a 2-1 lead in the series, a board official said on Wednesday.

In Tuesday’s encounter, Zimbabwe opted to bat first and were skittled out for 154 as celebrated leg-spinner Rashid Khan claimed five wickets for 24 runs. It was his third five-wicket haul in ODIs.

Afghanistan Cricket Board (ACB) spokesman Farid Hotak told Pajhwok Afghan the national team chased down the target in the 28th over with six wickets in hand.

Dawlat Zadran, who took one wicket for 28 runs, removed Hamilton Masakadza for nine, dealing the opposition an early blow. Solomon Mire smacked a couple of towering sixes before being dismissed by Mujeeb Zadran, who bagged three scalps.

Rashid struck twice in his third over to dislodge Sikandar Raza and Ryan Burl, restricting Zimbabwe. He went on to trap Craig Ervine lbw, leaving Zimbabwe struggling at 126 for 7. The spinner wrapped up the tail to finish with 5 for 24.

Both scored half centuries, with Rahmat smashing 56 and Nasir 51. Najibullah Zadran hit back-to-back fours to see Afghanistan dry and home.