KABUL (Pajhwok): A high-level NATO delegation visited Afghanistan from February 23 to 24 and reaffirmed their commitment to lasting peace in the war-torn country, the Resolute Support (RS) mission said on Saturday.

The visitors learned of progress in training, advising and assisting the Afghan National Defense and Security Forces and the Afghan government’s commitment to securing the country and building a future for all Afghans.

“We are not going to stand by and let Afghanistan be driven with violence again,” said Ambassador Hutchison. “So we hope that the Taliban will see that this is a no-win game for them unless they come to the table and become part of something that would make Afghanistan stronger. 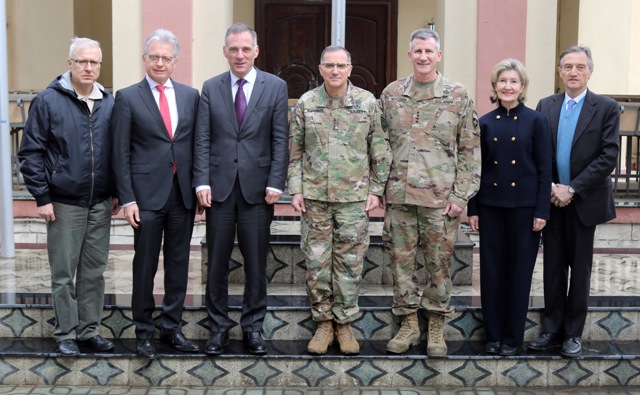 “We have 29 allies who are speaking with one voice that peace in Afghanistan is a goal that will protect Afghans and it will protect Europe. It will protect America and Canada. Our North Atlantic Alliance is firm on this subject,” Hutchison added.

Germany, Italy, Turkey, and the United States are RS framework nations, meaning they command the different regions in Afghanistan. They also represent some of the largest troop contributors to Resolute Support and the former International Security Assistance Force.

Afghan security forces took over the lead for combat operations from ISAF in January, 2015, and RS became exclusively a TAA mission.

In 2017, Afghan forces denied the Taliban any of their stated battlefield objectives—preventing them from capturing a single provincial capital—and have continued to pressure insurgents across the country throughout the winter.

“What we are seeing is a lowering of ambition of the Taliban,” said Gen. Nicholson. “Following the announcement of the U.S. South Asia Policy, the enemy made another decision to lower their ambition again and resort to terrorist attacks and to avoid the kind of fights where they have lost so heavily.

“So this exposes the hypocrisy of the Taliban, who every year talk about the desire to decrease civilian casualties and now are directly targeting civilians and taking credit for it.”

“Afghan Security Forces continue to improve their expertise and capabilities day-by-day,” said Gen. Scaparrotti. “NATO remains committed to supporting them as they develop their capabilities, strengthen command and control, and prepare the next generation of military leaders.”

At the NATO Summit in Warsaw, 2016, NATO Allies and Resolute Support operational partners committed to sustain the NATO-led Resolute Support, to continue national contributions to the financial sustainment of the Afghan security forces, and to strengthen the Enduring Partnership between NATO and Afghanistan through political dialogue and practical cooperation.

At their meeting in November 2017, Defence Ministers from NATO Allies and Resolute Support operational partners committed to increase the strength of the Resolute Support Mission from around 13,000 to around 16,000 troops; they also confirmed they will continue to fund the Afghan Security Forces until at least 2020.

In July, 2018, a NATO Summit will be held in Brussels where heads of state and government from NATO Allies are expected to reaffirm NATO’s continued commitment to Afghanistan.

The roadmap, unveiled by the Afghan National Unity Government in early 2017, outlines a plan for securing and maintaining control of 80% of the population, as well as committing to continuing reforms on good governance within the Afghan security apparatus.