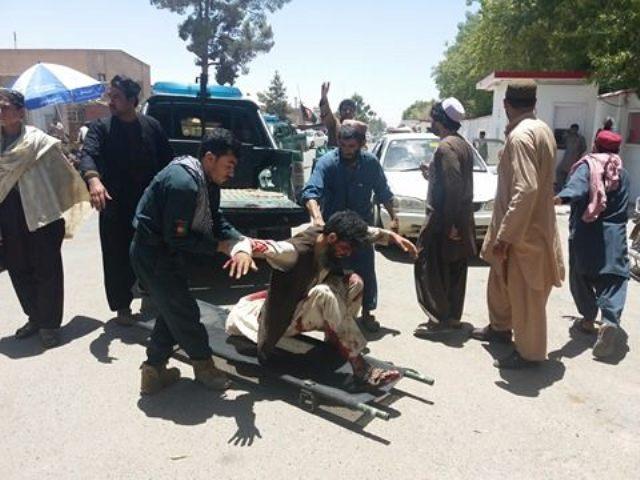 KABUL (Pajhwok): Nearly 1,400 people have been killed and wounded in 153 attacks in Afghanistan last month showed a 32 percent decline in the number of casualties compared to January.

Pajhwok Afghan News reports based on different sources showed the February attacks happened in 27 out of 34 provinces of the country in which 986 people were killed and 412 injured.

Statistics showed that of the every 36 persons 24 suffered casualties in faced to face firefight, five in airstrikes, four more in targeted attacks, two in blasts and one in suicide attacks.

In February more than half of the attacks happened in Faryab, Helmand, Uruzgan, Farah, Kandahar and Nangarhar provinces and the remaining attacks took place in 21 provinces.

According to Pajhwok report Nangarhar, Kandahar, Helmand, Uruzgan, Faryab and Farah provinces among ten provinces where more casualties happened due to armed attacks compared to other provinces.

Military affairs expert Gen. Zalmai Wardak said the number of attacks was up in Nangarhar province last year because besides the Taliban, Daesh was also active there.

He added Nangarhar and Helmand provinces shared border with Pakistan which another reason of growing attacks.

In addition, the growing of narcotics in Helmand was another reason of insecurity and lawlessness.

Sharing his views regarding Faryab, he said the province was of high importance for militants in the north, because from Faryab rebels could move to other provinces of the north as well.

He said besides the Taliban, Daesh had become more active with its insurgent activities in Faryab.

“Kandahar also shared border with Pakistan. The fact the our country has open borders with neighboring countries so there always chance of subversive activities and incidents of violence in bordering provinces,” he said.

He agreed that Pakistan was a safe haven for militants and the neighbouring country always created complex issues for Afghanistan.

Sharing his view about insecurity in Uruzgan, he said the province was gateway to five other provinces Ghazni, Zabul, Kandahar, Helmand and Daikundi.

He said militants could easily penetrate from bordering provinces to Uruzgan from where thy sneak into Daikundi, Ghor and northern part of the country.

Expert has termed the presence of corruption, lack of proper administration, lack of equipments reasons behind growing insecurity.

In addition, the collection of custom duties which financially strengthened the rebels and support from some countries specially the Taliban which disturbed the situation to great extent in Farah province.

But Iran rejected the allegations of support to rebels in Farah. Recently a Taliban commander has said the group supported the construction of Bakhshabad Dam in Farah.

Reports showed that last month 986 persons were killed and 412 others injured in 153 attacks. Among the dead and wounded were rebels, security forces and civilians.

but Pajhwok could not share separate and exact number of dead and injured of each category because different sources shared different views.

Zalmai Wardak, a military affairs expert said that it depended on war type and tactic when high casualties switch areas.

He said that front wars cause more casualties in populated areas.

But Brig. Gen. Mohammad Radminsh, spokesman to the Ministry of Defense, said that the reason behind low casualties last month was defeat of militants.

Alia Faroqi, a resident of Fazelbig area of Kabul, told Pajhwok that all Afghans were tired of war and they hoped for a permanent peace.

She was happy about low casualties last month but said, “We in the past winters also hearing more about peace talks and low casualties graph, but the conflict was intensifying with the arrival of spring,”

Alia voiced on the warier parties, particularly the Taliban to positively respond to the Afghan government peace offer and resolve the Afghanistan crisis through negotiations.

The Afghan government on February 28 in a meeting attended by representatives from 25 counties and international organizations in Kabul, offered its peace proposal to the Taliban.

Accepting amendment to the Constitution through legal ways, ceasefire, opening a political office for the Taliban, recognizing them as a legitimate political party, releasing their prisoners and trying to lift international curbs on the movement leaders are features of the proposal.

Sayed Agha Ibrahim, a resident of Maidan Shahr, the capital of Maidan Wardak province, sadi, “We hope the conflict would gradually stop and peace would establish in this country, but people fear the fight would intensify with the weather gets warm,”

Taliban militants and other insurgent groups fight against foreign forces in Afghanistan since last 17 years.

Casualties resulted from war in Afghanistan was unclear since before 2017, but the conflict was usually increasing as weather was getting warm.