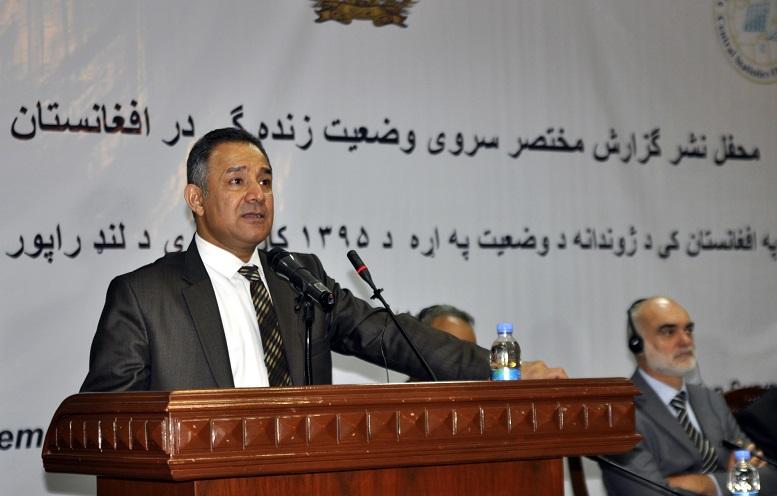 KABUL (Pajhwok): A new survey shows the extreme poverty line in Afghanistan has gone 21 percent up compared to what the parity had been a decade ago. The survey records a 23 percent surge in literacy rate in the war-ravaged nation during the period.

Conducted by the Central Statistics Organization (CSO), the survey released on Sunday in Kabul indicated a 40 percent improvement in healthcare services for expected mothers during the past 10 years.

The SCO conducts surveys once in two years about people’s livelihood in Afghanistan in financial cooperation with the European Union, the World Food Program and the World Bank .

Prof. Hasibullah Moahid, CSO deputy head, announced the result of the sixth survey on people’s livelihood in Afghanistan. He said the organization surveyed 21,000 families or 156,000 people in all provinces of the country.

The figure for poverty threshold in 2016 in Afghanistan was spending below 2,064 afghanis a month.

Moahid said the poverty ratio used to increase in winter compared other seasons and reduce in summer.

He added 13 percent of Afghans lived without having own houses. More than 70 percent of urban populations lived in poor neighborhoods or in inappropriate houses, he said. He said 44 percent of people lived in congested apartments or more than three persons per room.

The survey shows that four among 10 people have no food safety.

According to the survey, eating less than 2,100 calories a day means the lack of food security.

The survey says a major part of the country’s economy is disorganized, informal and illegal with livelihood being financed based on informal work, low wages, child labor, migration for work and hard labor.

It shows a little more than half of the country’s workforce is engaged but around two million people are jobless across the country.

Most of the workforce is associated with agriculture and the least of them are working in areas of electricity, liquefied gas and water, the survey notes.

Except factories and industry, men’s partnership is higher in all other areas compared to women, the survey finds.

It says women’s partnership in industry is 64 percent, in agriculture 33 percent and in private, social and  local services their share is 10 percent and in finance, insurance and entrepreneurship is four percent, in business two percent and in constructions, mines and transport is less than one percent.

However, women have no role in in electricity, gas and water sectors.

The survey shows agriculture is the main income source for 28 percent of Afghans. On average, 38 percent of people own 2.5 acres of land, with access to irrigation water. A shortage of water is the main challenge to the country.

Without providing information about reasons for shrinking access to potable water, Prof. Haseebullah Mowahid said the reduction was not at a high level.

The literacy rate among men has increased from 40 percent to 68 percent and among women from 20 percent to 39 percent, compared 10 years ago.

The survey shows pregnant women’s situation before and after delivery has improved (at least one visit).

The report says 48 percent of the population is below 15 years of age. On average, a family has 7.7 members. Half of families have nine or more members.

More than eight percent of married women are living with polygamous husbands, reveals the study. The country’s population was estimated 29.2 million in 2016 — 51 percent men and 49 percent women.

Economy Minister Mustafa Mastor hailed the survey results, saying the statistics suggested Afghanistan was not in a good situation. The findings indicate an alert for the Ministry of Economy.

The study would help the government draw up more accurate programmes in line with people’s requirements to resolve the current problems being faced by the country, he said.

He added $80 billion had been spent on alleviating poverty in the country during the last one and half a decade. Insecurity, instability and election crisis are the main reasons behind the backwardness of the country.

Mastor hoped the situation in Afghanistan would improve as a result of efforts being made by the government.