‘One of two Kandahar attack plotters flees to Pakistan’ 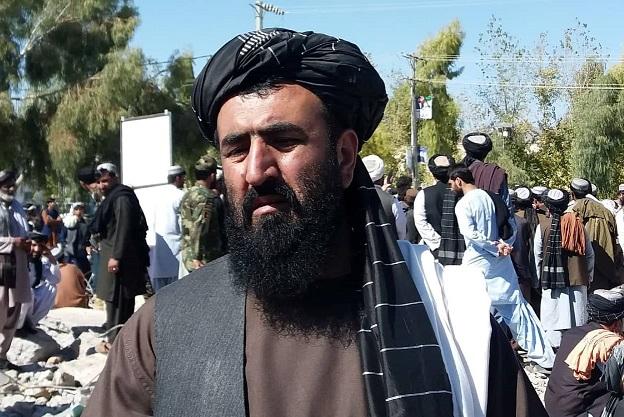 ‘One of two Kandahar attack plotters flees to Pakistan’

KANDAHAR CITY (Pajhwok): One of the two main perpetrators behind the insider’s attack in which Kandahar police chief Gen. Abdul Raziq was killed has fled to Pakistan, an official said on Sunday.

Haji Agha Lalai Dastagiri, advisor to the Kandahar governor on social affairs, told Pajhwok Afghan News during an exclusive interview that the two main conspirators served in the security guard contingent of the governor, Zalmai Weesa.

The meeting was organized in the Kandahar governor’s house and also attended by NATO and US forces top commander in Afghanistan Gen. Scott Miller, who escaped unhurt.

The assailant was killed on the spot, but the main planner behind the attack named Basir Ahmad, a resident of the fourth police district of Kandahar City, is alive, Dastagiri said.

Lalai said these two persons were the main perpetrators — one was killed and another flees to Pakistan.

He said Basir had introduced the killer, Gulbadin, as his nephew before his recruitment in the governor’s guards about one and a half months ago.

“In this time, Gulbadin earned the trust of his seniors and even performed duty at the governor’s office gate.

Dastagiri said Basir Ahmad left for his home about two and a half hours before the attack on Thursday, saying his wife was ill.

He said information showed Basir after leaving the governor’s house went to a Taliban area and then fled to Pakistan.

After the meeting ended, the governor, the police chief, the intelligence chief and other officials were seeing off the NATO commander when Gulbadin arrived with cartons of pomegranates as a gift for Gen. Miller and at the same time he opened firing at Gen. Raziq and others.

Raziq was received one bullet in the heart, another in stomach and two in the feet and he succumbed to his wounds upon reaching Mirwais Hospital.

Dastagiri said Salim Angar, a Milli TV journalist, ran towards the attacker with empty hands, but he was also shot and killed.

But Angar rescued lives of many people including the governor before security forces killed the attacker, he said.

“I think the attacker was waiting for this type of gathering of all officials at one place because the police chief would usually come to the governor’s house alone,” he added.

He said three bodyguards including head of governor’s bodyguards were arrested and shifted to Kabul for investigation.

Wolesi Jirga member from Kandahar Hamidzai Lalai, who visited Wesa today, said that the governor was in good condition and would be discharged from the hospital in 10 days after one surgical operation.

About security situation of Kandahar, Dastagiri said that NDS chief Masum Stanikzai was in Kandahar and deputy police chief, Brig. Gen. Rahmatullah Atrafi was looking after the police headquarters.

Dastagiri  said Kandahar influential figures and elders had asked Stanikzai to appoint Raziq’s brother, Tadin Khan, as police chief of Kandahar, but a final decision was yet to be taken in this connection.