Govt yet to deliver on promises: Kin of fallen soldiers 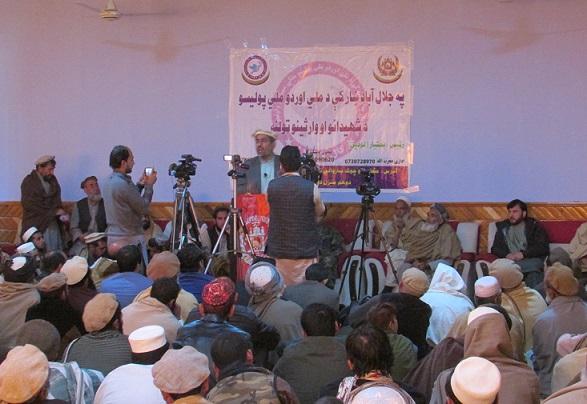 Govt yet to deliver on promises: Kin of fallen soldiers

JALALABAD (Pajhwok): Some families of martyred Afghan National Army (ANA) soldiers and police in eastern Nangarhar province on Monday complained the government was yet to approach them with its promises.

The families, who held a gathering in the Provincial Council hall here, said they faced many hardships including poor economic situation which kept their children uneducated.

They claimed receiving the annual aid after delays, confronting them with multiple problems.

The government has promised to give each of these families a land plot, send two members of each family to Saudi Arabia for hajj performance, but these promises remain confined to papers only.

The families of fallen soldiers numbering around 200 expressed their deep concern, saying if other families saw their situation, they might not send their sons to the military in future.

Hazrat Bilal, who lost his brother in a clash with Pakistani forces, told Pajhwok Afghan News that officials had promised them assistance but after years, no one helped them and that he was concerned about his brother’s children education and future.

Ghulam Ghauas, an elderly man, who lost his son in the conflict five years back in southern Helmand province, told Pajhwok he had visited the municipality department several times for obtaining a land plot but the officials gave him different dates.

He said he sent his another son to the military, but negligence of government would discourage other families to send their sons to military in future.

He said a large-scale government land had been grabbed by some government officials and some by a number of powerful individuals but nothing was to given families of martyred soldiers.

The governor’s spokesman, Attaullah Khogyani, told Pajhwok that demarcation of plots in the township for such families had been practically started after 14 years of delay in Behsud district of the province.

He said 1,244 land plots would be given families of martyred soldiers in the township.