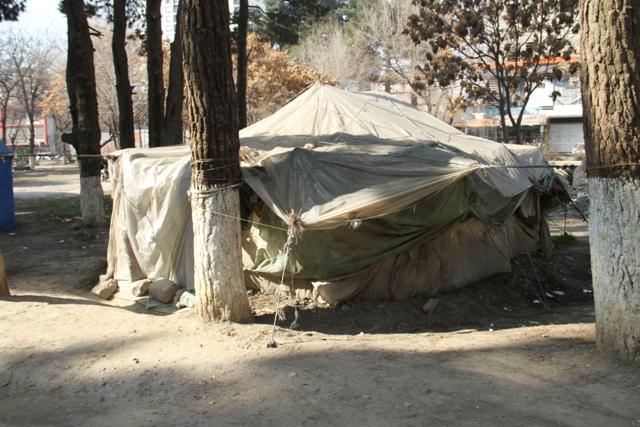 KABUL (Pajhwok): A physically-challenged person in capital Kabul says he lived in his a protest tent for years in the hope to recover his usurped land and get the court’s order in his favor enforced.

Police say they have attempted to enforce the court’s verdict in the case, but they are not directed to use force.

However, local residents claim the land was allocated to a mosque in 1992 by the relevant organs.

Najibullah, a resident of Kabul and a retired major who lost both legs and a hand in the past war, installed a protest tent in Shahr-i-Naw city of Kabul for four and a half years in order to recover his 450 square meters of land.

He says the grabbers of his land do not accept the court’s decision. He said his land was located near Amir Hamza Mosque in the limits of the fifth police district of Kabul.

Najibullah said he had visited the organs concerned in connection with his land’s usurpation but he was told to move the Parwan province’s appellate court.

The Parwan province’s appellate court in 2017 decided that the land belonged to Najibullah. The Supreme Court ordered the Ministry of Justice to enforce the verdict.

Kabul provincial Directorate of Law on July 27 this year asked Kabul police to arrest and introduce to attorney office the people involved in the case.

Later, Kabul Police Headquarters ordered criminal investigation department of the fifth police district to take action on the regard.

On the other hand, the Ministry of Hajj and Islamic Affairs on August 3 in a letter wrote to the Kabul Provincial Directorate of Law said, “The 450 m2 land which is annexed to Mir Hamza Mosque’s enclosure belongs to Najibullah, the son of Mohammad Akbar.”

Najibullah named some residents of Khushal Khan area including Rustampor, Abdul Aziz, Mohammad Alam, Nasar, Ezatullah and others created and accused them of creating hurdles to the enforcement of the court’s decision regarding his land.

He said police had been ordered to arrest those preventing the court verdict to be enforced but no action could be taken so far.

Rashid Khan, crime branch chief of fifth police district of Kabul, said that police introduced the figures who barred the enforcement of the verdict to the Attorney Office but the attorney office released them on bail.

He said Kabul Provincial Directorate of Law should task a joint team for forcibly vacating the land belonging to Najibullah.

Jamshid Rasouli, spokesman of Attorney General Office (AGO), said denied anyone was referred to them regarding the complaint but the AGO had ordered security organs to capture the trouble makers.

“The AGO is responsible to enforce penalty orders but the issue of the land is a legal issue and the Ministry of Justice should take action on this regard”.

He said the AGO was ready to introduce its members of delegation for enforcement of the verdict if the Ministry of Justice ordered so.

Saif Rahman Bilal, head of Kabul Provincial Directorate of Law, said that he had provided information about the issue to the Ministry of Justice.

Land was allocated to the mosque by Ministry of Hajj and Islamic Affairs: People

Noorullah Khairzad, a member of the council of Amir Hamza Mosque, told Pajhwok Afghan News that the land had been allocated to the mosque by the Ministry of Hajj and Islamic Affairs in 1992.

However, the ministry of the time in a letter to the Kabul municipality said, “Please order the relevant organs to resolve the problem and give an alternative piece of land to the sons of Mohammad Akbar…”

On the other hand, Khairzad said Kabul Provincial Directorate of Law in a letter wrote to the Ministry of Hajj and Islamic Affairs in 2014 had said the land belonged to the ministry and relevant organs should take care of its protection.

Rastampor, another person accused by Najibullah of creating troubles in enforcing the court verdict, said he was not engaged in the issue.

However, Mohammad Nasar, another local person, said Najibullah had made ‘fake’ documents and wanted to benefit from his disabilities.

Pajhwok tried to talk to other local people involved in the issue, but a contact could not be establkished with them.