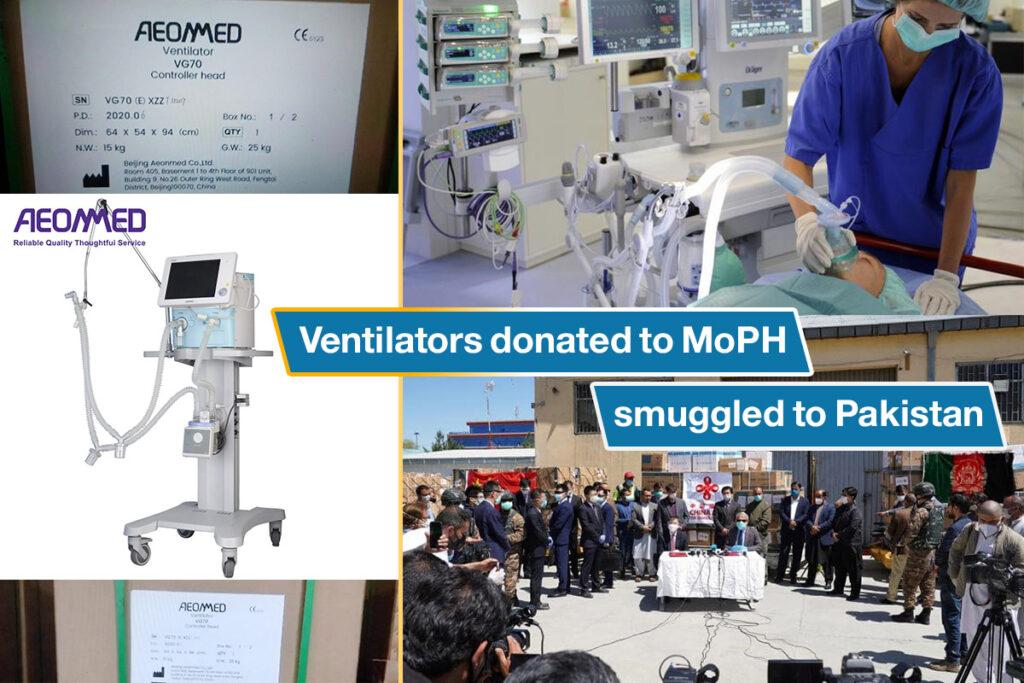 An Afghan businessman tried to buy these ventilators which, according to sources, cost $600,000 and hand them over to the government in Kabul. The Ministry of Public Health (MoPH) is investigating the smuggling of the machines.

Pajhwok Afghan News has received audio clips and photographs showing the 32 ventilators that have been smuggled to Peshawar. The entire process has been conducted on Whatsapp Application, in which smugglers talk about the price and place of the ventilators.

In the audio clip, one person says: “There are 32 S-100 model ventilators, but remember they are stolen from Afghanistan’s Public Health Ministry.”

He continues: “The man who dispatched these ventilators stressed that no one in MoPH should know that this model of ventilators cost $18,000 to $25,000. See if they need them, then we can talk.”

An Afghan businessman, who wished not to be named, told Pajhwok Afghan News he had been following the matter with sources in Pakistan and trying to purchase the smuggled ventilators.

“I am negotiating the purchase of these ventilators. Even I have negotiated the price. We want 15, but they stressed we should buy all of them. So far nothing is decided,” explained the businessman.

A trusted aide to the businessman met the smuggler, who said the ventilators were donated by an NGO to MoPH. They refrained from sharing more information on the issue.

The smugglers, afraid of being exposed, are very careful. They want to sell one ventilator for $8,000 while the businessman has offered $5,000.

Pajhwok has also received documents and photographs that show the ventilators have been manufactured by the Beijing Aeonmed Co, Ltd. This Beijing-based firms manufactures OR and ICU medical equipment. According to their website ‘ventilator vg70 controller head’ is their product and its price ranges between $12,000 and $17,000.

Ventilators play an important role in the treatment of respiratory diseases, including patients suffering from coronavirus and struggling with respiration.

They are of two types — one ventilator used in hospitals and the other called CPAP is used in homes.

According to the World Health Organization (WHO), 80 percent of coronavirus patients need treatment in hospitals. Of every six patients, one faces respiratory problems.

Ventilator is a machine that helps you breathe when you are sick, injured or sedated for an operation. It pumps oxygen-rich air into your lungs. It also helps you breathe out carbon dioxide, a harmful waste gas your body needs to get rid of.

Akmal Samsor, Public Health Ministry Advisor and spokesperson, said ventilators were machines that required professional individuals to operate them. Common doctors could not operate them because pipes go deep into human body and it was a hard task that every doctor could not do.

Referring to the smuggling of some ventilators, he promised MoPH would investigate the issue. The individuals involved in their smuggling would be dealt with according to the law, he vowed.

The Chinese embassy in Kabul was asked for comments in this regard through an e-mail. The embassy responded that information on this matter would be shared after permission from the ambassador.

For confirmation of the origin of the ventilators, an e-mail was also sent to Beijing Aeonmed Co, Ltd. But no response was received from it in six days.

Ventilators that provide artificial oxygen to critical coronavirus patients are smuggled to Pakistan at a time when the devices are desperately needed in the country. Several people have lost the battle against the respiratory disease due to non-availability of ventilators.

Health officials say 336 artificial oxygen devices are currently available in the country, but still there was need for more ventilators and professional individuals in different provinces.

Samsor said according to the list available with the ministry, China had provided four ventilators, Turkey three, Iran three and WHO in support of the World Bank delivered 27.

But a well-placed source in MoPH accused ministry officials of hiding the exact number of ventilators. The source said MoPH did not want the public to know which country had provided how many ventilators to Afghanistan.

The source added a Qatar-based welfare organisation had provided 12 ventilators to Afghanistan. Assistance provided by Saudi Arabia also included ventilators, but MoPH is tight-lipped on their number.

On June 11, Turkey handed over its coronavirus-related assistance to Afghanistan and Health Minister Jawad Usmani said three PCR and 10 artificial respiratory devices were part of the aid. The MoPH spokesperson also acknowledged the assistance was transferred to the central warehouse two days ago.

On May 13, MoPH on wrote on its Facebook page the Turkish TIKA Office had provided it with some medical equipment in assistance that included three ventilators.

Acting Public Health Minister Ahmad Jawad Usmani said in a message there were at least 10 ventilators in the central warehouse, which were not used. Hospitals need the devices and they would receive machines soon.

On Sunday, Usmani told reporters currently there was no shortage of ventilators. However, he acknowledged there was oxygen shortage a few days back.

Meanwhile, provincial officials complain of a lack of facilities. Kandahar Public Health Director Mohammad Tawoos Ashraf Naderi said there were only two ventilators in the province and they were not enough for patients.

He added they used the machines only when the condition of patients deteriorated. According to him, the province needs at least 50 more ventilators. Technical workers and professionals are also needed to operate the ventilators.

Naderi explained they had enough budgets to purchase the devices for Kandahar hospitals but they would take action once the issue of airspace closure was resolved.

Ismael Stanikzai, in charge of combating coronavirus in eastern Nangarhar province, said they had only six ventilators at the hospital for Covid-19 patients and that they needed at least four more machines.

He said: “These devices are very useful when patients’ condition deteriorates. The device could save his/her life.”

Balkh Public Health Director Nizamuddin Jalil said there were 14 such devices in the province. Since most patients are taken to the hospital in critical condition, the devices produce a positive effect. He also stressed the need for more ventilators.

Mohammad Shafiq, a spokesman for the Public Health Department in Herat, said they had 18 ventilators and 10 of them were received from MoPH and four donated by Qatar through the Al-Ghurafa Foundation. He also stressed the need for another 10 machines.

Maseeh Noori, speaking for the coronavirus hospital in Kabul, said the Afghan-Japan and Mohammad Ali Jinnah Hospitals had eight ventilators each. He insisted the machines were very handy but each of the hospitals needed 20 more.

An individual named Kamin Ahmad Noori recently uploaded a video on his Facebook page, claiming a coronavirus patient lost his life to the lack of ventilators in a Khost hospital.

The day after the video was posted by Noori, some residents and civil society activists rallied against the lack of ventilators at the Kaderi Hospital in Khost. At the hospital devoted to combating the Covid-19 pandemic, they alleged, lives of patients were at risk.

Khost Public Health Director Habib Shah Ansari said only two ventilators existed in the province, which needed as many more.

Mukhtar Ghafarzai, another citizen, asked on Whatsapp: “Find out a hospital that has a ventilator or one that gives it on rent. If anyone knows about such a hospital, cooperate with us admitting our patients there…”

In response to his request, another Aziz Ahmadzai said: “It is very unfortunate that there is no ventilator in the nation’s capital. In such a compelling situation, may Allah accept our prayers quickly. Let’s say together Amin.”

Nasreen Oryakhel, director of the Afghanistan Medical Council, told a press conference last week the foundation’s findings showed that most of coronavirus patients had died in hospitals due to lack of oxygen. The council monitored Kabul hospitals for two weeks.

According to MoPH, so far over 29,143 people have tested positive for the disease, 598 have died and nearly 8,841 others have recovered from the pandemic.

But Akmal Samsor, spokesman for MoPH, strongly rejected the claims of Nasreen Oryakhel and said there was no shortage of oxygen. He wondered why the Afghanistan Medical Council reported it.

According to the number, fatalities of Afghanistan are less compare to the neighboring countries; like Pakistan’s death level is 1.88 and ours is 1.86.

He added a total of 3,500 beds had been set up in the country to prevent the spread of coronavirus, and 3,200 of them were occupied last week; it meant that 40 percent ICU vacant.

Samsor claimed patients’ failure to follow medical guidelines often led to the death of Covid-19 patients, who were evacuated to hospital after their condition deteriorated, They cannot be saved, even if put on ventilators.

On May 18, the National Procurement Commission (NPC) approved a recommendation for the purchase of 500 ventilators following an increase in number of coronavirus patients, shortage of ventilators in provinces and a spate of complaints from the health sector.

The MoPH spokesman said NPC had purchased from a German firm 500 ventilators for the ministry, which was waiting for the resumption of flights to bring them home.

A public health official, meanwhile, alleged that corruption was delaying the timely delivery of ventilators. He claimed there was evidence of a deliberate delayed in transportation of the devices to let prices sky-rocket.

The source disclosed they had finalised the purchase of ventilators for $7,500 apiece but a circle in the Presidential Palace insisted on buying machine for $50,000. Shakir Kargar, chief of staff to the president, wanted to buy one machine for $25,000 from Turkey, he charged.

The NPC has purchased 500 ventilators from a Germany company (CAMED Medical System Gmbh) for 5.5 million dollars, with the average cost of one device working out at $9,700.

The National Procurement Authority (NPA) signed a contract with the German company because the Istanbul Parma put the price of one device at $25,000 and another firm named Dakash Healthcare demanded $25,900 apiece. The MoPH paid only $16,200.

In line with its decision No 4,039, which was taken at its 215th meeting, the NPA purchased 400 of the 500 ventilators for $7,500 and the remaining 100 for 12,000 euros because of a surge in market prices. The total cost of the devices is 4.2 million dollars, but the decision shows more than 1.3 million dollars in additional cost.

Ramin Ayaz, a spokesman for NPA, said the extra money invoice, which was to be utilised in six months, was being spent on buying full face masks and single-use air pipes.