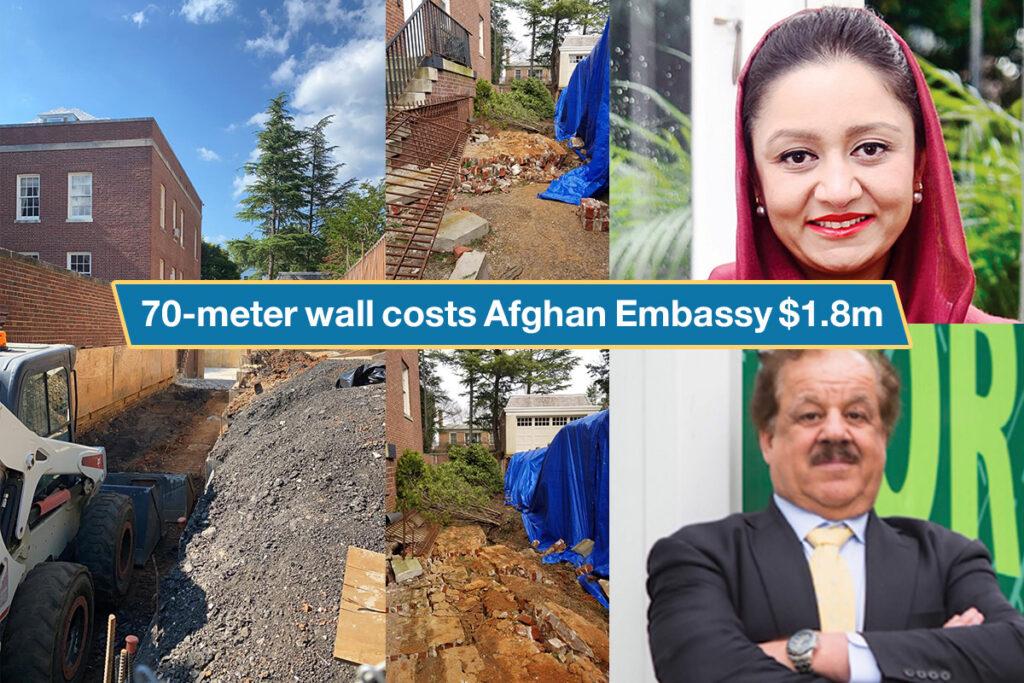 KABUL for $88,000 was rejected by the embassy, Pajhwok has learnt.

According to information, the wall has been built 20.74 times higher cost than the initial company proposed and each meter-square cost 8,694 US dollars.

A reliable source told Pajhwok Afghan News that a company had offered reconstruction of the 70-meter long and three-meter high wall of the eastern part of the Afghan embassy in Washington at a cost of 88,000 US dollars but the embassy rebuilt the wall at a cost of 1,586,000 US dollars through a contract by another company.

Pajhwok also received a copy of the document sent by the Afghan Embassy to the Ministry of Foreign Affairs (MoFA) on March 29, 2019, along with letter No18.

It shows that JG Construction Company initially offered to build the wall at a cost of 68,100 US dollars but later raised the price to over 88,000 US dollars.

A credible source, speaking on the condition of anonymity, told Pajhwok that the ambassador in Washington had taken responsibility of the project from Barakatullah Rahmati due to pave the way for “corruption” in the project and she asked Haris Ansari from Kabul to be hired instead of Rahmati.

The source explained: “The ambassador (Roya Rahmani) changed the previous calculations for the project in consultation with Yama Nizam, Humayun Qayyumi, some members of the National Procurement Commission and Presidential Adviser Shad Mohammad. Instead, in a letter 912 dated October 26, 2019, a contract was signed with an American-based company KADCON Corporation at a cost of 1,586,000 US dollars – a decision the central government has accepted.”

The Afghan Embassy could purchase a building

According to the source, the collapsed wall made up about seventh part of the embassy’s perimeter wall and the price (around 1.8 million US dollars) for its construction was enough to purchase a complete building a few kilometers away from the diplomatic area.

He said four other small contracts had also been signed regarding the reconstruction of the wall.

According to MoFA’s letter, the ECS Company has been awarded 12,250 US dollars against soil test for reconstruction of the wall.

A detailed report about the wall projects received by Pajhwok Afghan News shows that VIKA Company received 64,839 US dollar for technical advice.

For survey, the same (VIKA) company received 12,750 US dollars from the embassy.

A credible source in MoFA said DLA Piper company was paid 150,000 US dollars for arranging the contracts and legal advice.

A copy of the letter from the MoFA, received by Pajhwok shows that 1,586,000 US dollars had been transferred to the embassy’s bank account under the contract for the wall reconstruction.

The source quoted finance diplomats of the embassy as saying, the money had not been paid directly to the project’s contractors but through cheques from a third party via the embassy’s financial account.

He also accused Roya Rahmani of “negligence” in maintaining the embassy building and of “corruption” in the reconstruction of the wall, saying she also kept the embassy staff in the dark.

The contract is approved by National Procurement Commission

The Afghan embassy in Washington also accepted bids from the two companies, saying that final price (1,586,000 US dollars) had been approved by the NPC for the construction of the wall.

Sayed Najib Hashimi, spokesman for the Afghan embassy in Washington, told Pajhwok that the 70-meter long wall of the embassy had been crumbling to dust for the past 27 years and finally collapsed last year due to heavy rains and the embassy repeatedly contacted the “authorities”.

He said the JG company initially based on estimation offered 68,100 US dollars for reconstruction of the wall, excluding project’s implementation and cleanliness costs after rebuilding of the wall.

He informed that the same company had again accepted the certain conditions and offered 88,180 US dollars to the embassy but the offer was rejected by MoFA and neighbor of the embassy because they did not trust the firm.

Hashimi added: “The house owner (neighbor of the embassy where the wall is collapsed) has been in contact with MoFA’s officials and some members of Congress, so he politicized the issue of the wall and at last he hired a special lawyer for asking to implement the project and the embassy introduced Finance Ministry’s advisor Yama Nizami.”

He also acknowledged that in agreement with both parties and in accordance with the principles of the Washington DC municipality, a contract of 12,750 US dollars was signed with VIKA Company to determine the volume, dimension, construction and survey of the wall.

Hashimi added that another contract at a cost of 68,830 US dollars was signed with a company named KCE for technical advices and for soil testing 12,250 US dollar’s contract awarded to ECS Company.

According to him, the project was approved by the NPC on September 2, 2019 with KADCON Corporation in accordance with the decision number 3,557.

A source in MoFA told Pajhwok that Presidential Adviser Shah Mohammad Sargand in consultation with Humayun Qayyumi had asked MoFA deputy financial minister in a letter termed the agreement of the project with KADCON company as successful and requested another 300,000 US dollars.

The source said: “The issued was raised by Qayyumi at a NPC meeting, but in part of the project, the National Procurement Authority (NPA) is considering, it is written that the project should be approved based on Qayyumi’s guidance and emergency situation.”

According to the source, the MoFA received approval for the project and they shared it with the Afghan embassy in Washington and transferred money from the Ministry of Finance.

Ahmad Ramin Ayaz, spokesman for NPA, told Pajhwok that the Afghan embassy had launched the project in accordance with the American procurement law and six firms had joined the bidding.

The project has been presented by the MoFA to NPC meeting number 198th and after discussion, it was approved following the emergency situation, he explained.

According to the embassy’s spokesman, based on the decision of NPC, the project was handed over to Presidential Adviser Shah Mohammad Sargand.

Hashimi added: “The money could not be directly given to the companies because they were looking at the progress of the construction of the wall and needed the approval of Shah Mohammad Sargand.”

However, Pajhwok emailed JG Company and Shah Mohammd Sargand for comment but they did not respond until today (Saturday, July 11).

A credible source, speaking on the condition of anonymity, told Pajhwok that the ambassador in Washington had taken responsibility of the project from Barakatullah Rahmati in order to to pave the way for “corruption” in the project and she asked Haris Ansari from Kabul to be hired instead of Rahmati.

The ambassador called Haris Ansari to Washington, son-in-law of the project supervisor Shah Mohammad Sargand from Kabul, but after the issue was reported in the media, the president ordered Haris’s dismissal and Ansari sought refuge in the US instead of returning to Kabul and disappeared without returning the official cards to the embassy.

Regarding Ansari’s case, a report from MoFA shows that Roya Rahmani had secretly sent a proposal to the central government for appointment of Ansari but instead of citing appointment, “administrative matter”  has  written in the embassy’s book and after the issue became controversial, the MoFA fired Ansari.

Ansari, who is currently in the US, told Pajhwok that he had been asked by Roya Rahmani to serve in technology sector, but 20 days later the ministry fired him for “unknown reasons”.

He denied allegations he had sought refuge in the US, saying he had visited America several times before.

A letter sent by the MoFA to Afghan embassy in the US, a copy of which is available with Pajhwok, shows that Haris Ansari was appointed to solve the problems of the wall project.

Hashimi, spokesman for the embassy, said Ansari was introduced to the embassy by MoFA but was recalled to Kabul after half a month.

“When an employee is recalled to Kabul, like other embassies, the embassy handles the return until a plane ticket, but could not force the employee to return for deport,” he added.

Gran Hewad, spokesman for MoFA, told Pajhwok that the issue was “sensitively important’ and they held two meeting for collecting information and after the 3rd meeting today (Saturday), they would provide information to Pajhwok and promised to talk about the matter again tomorrow.