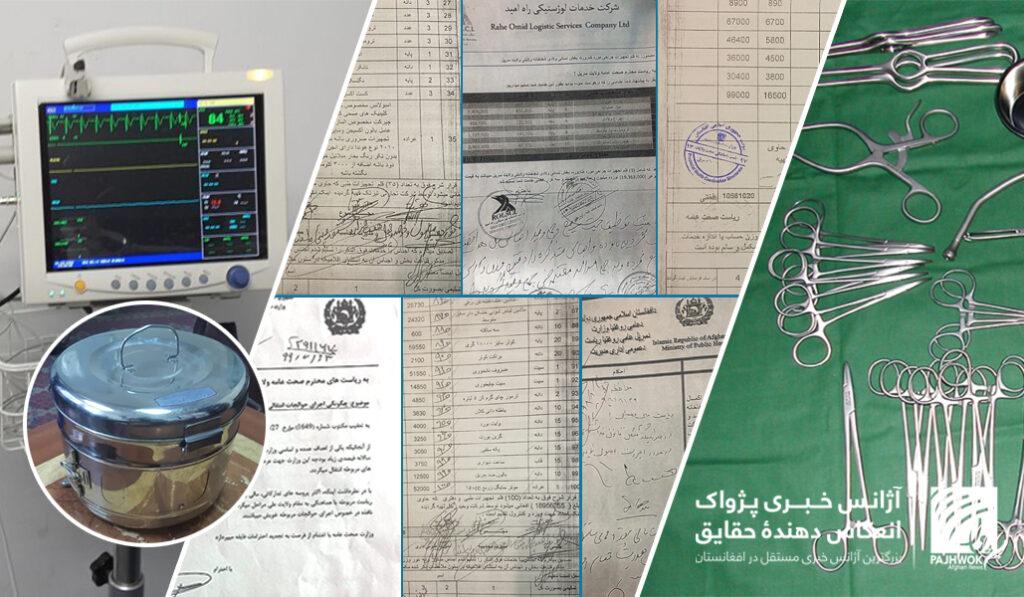 Among the 317 different medical items, a metzenbaum scissor is purchased at 49,000afs the normal price of which is 560afs only in the market.

These items were purchased in 2018 and 2019 under 12 different agreements for the Sar-i-Pul Provincial Hospital, three clinics of Sar-i-Pul City, Sayyad district clinic, Kohistanat central and local clinics and the Balkhab district’s 30-bed hospital by the Rah-e-Omaid, Taiztak, Zia Khan Mudaqiq and WaheedRaheel Logistic Companies.

Copies of documents signed by former Public Health Director of Sar-i-Pul Noor-ul-HaqMuradJalees and then Governor Mohammad ZahirWahdad showed that these medical items were purchased at a very high price as compared to their normal market price.

Pajhwok Afghan News was able to get market prices of 317 items out of the total 346 purchased items. The calculation has been made on average price. The remaining 29 items could not be calculated because the available list did not describe their properties.

Why one agreement is divided in 12 sections

A well-placed source in the Ministry of Public Health (MoPH) said the above items should have been purchased under one contract but in order to escape the National Procurement Commission’s oversight, it was divided in 12 different sections.

The source said according to the resolution No. 338 of the NPC dated August 24, 2015, the body has the authority in a contract bidding to be worth up to 20 million, but the clause sixth, section three of article 15 of the procurement law says that when a contract is disintegrated into parts, the matter should be shared with the NPC.

The MoPH source said this case was being investigated by the health ministry’s internal audit section.

NoorullahTaraki, assistant spokesperson for MoPH, said Sar-i-Pul health officials should be inquired about these contracts because they had been signed by the local government.

He said fund for the contracts sent to the Revenue Department of the province by MoPH had been spent with orders of the Governor’s House. He provided a copy of official letter from the MoPH supporting his claim.

But Sar-i-Pul Health Department Director Noor Ahmad Ishaqzai said: “I have been recently appointed as health department director and I have no role in the purchase of these items.”

Former Health Department Director Noor UlHaqJalees said he was unaware about the purchase of medical equipment at higher price because the contracts had gone through the observation of the Provincial Procurement and Evaluation Committee and signed by the governor.

“I don’t know, it is up to the Procurement Committee, I have no information about the prices nor I have checked the prices. There are too many items in the list, how I can judge the prices. The committee has passed the contracts, so I also signed them,” he said.

Former Sar-i-Pul Governor ZahirWahdat said: “When some items are being purchased all the documentation work is completed at the same time. Such items are purchased in the presence of a delegation and the procurement commission and people are also informed. I thing similar things might have happened in this process as well.”

When asked about the purchase of items at higher price than the normal market price, he said: “When I don’t know the value of metzenbaum scissor, how I would know its price.” According to the list, metzenbaum scissor was purchased at 49,000 afs while its normal price in the market is 560afs.

He said it is not responsibility of the governor or a minister to go to the bazaar and inquire about the price of every item.

Incumbent Sar-i-Pul Governor Abdul QadirAshna’s Office sought three days on December 4 last year to respond but has not yet shared their views.

Pajhwok tried to reach out to the logistic companies who implemented the contracts but was unable to contact them.

ShapourHussainzoy, Wolesi Jirga Audit Commission head, said these contracts were illegal and the suppliers did not purchase complete items despite funds had been provided.

He alleged besides Sar-i-Pul contracts, MoPH officials were involved in corruption in some other provinces as well.