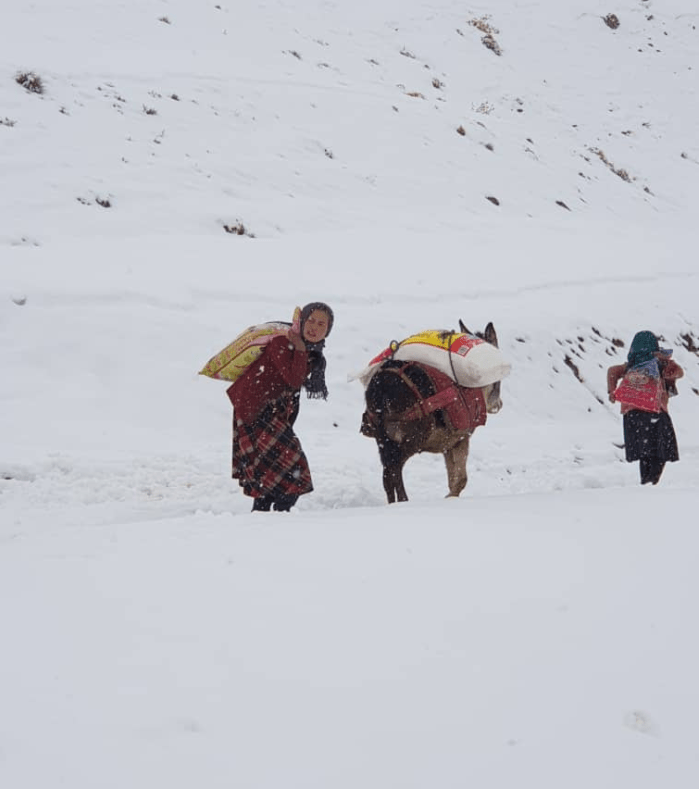 KABUL (Pajhwok): Some sources claim the Taliban are not allowing the National Food Program (NFP) to be implemented in the Jalrez district of central MaidanWardak province and Talak and Shahrak districts of Ghor province, a claim the rebels reject as baseless.

Other sources claim the Taliban, in addition to the two provinces, have prevented the NFP in 135 villages of Baghlan, Kunduz, Kandahar, Helmand and Balkh provinces as they demand a 10 percent share in the program.

But Pajhwok findings show the NFP program has not yet been extended to Helmand’s districts and has not been started in Panjwai district of Kandahar due to clashes, but the programs is being implemented normally in Kunduz.

Problems created by strongmen against the program in Baghlan and Balkh provinces have been resolved by tribal leaders.

According to government sources, through the scheme that commenced on August 20 of 2020, 90 percent of the country’s families will receive food worth 4,000 afghanis for each family. The aid includes cooking oil, rice, beans, flour and hand washing soap. The total estimated budget is $246 million.

Some sources confirm the Taliban have barred NFP in one district of MaidanWardak and in two districts of Ghor, but the group rejects the allegations as baseless.

SharifullahHotak, a member of the MaidanWardak province council, said the Taliban had stopped the NFP in Jalrez district.

He said: “The Taliban have demanded a 10 percent right in the program in the district, the people, the provincial council, the rural development department and the governor’s house are trying to resolve the issue through talks.”

According to him, the Taliban often demand share in a number of development projects  in MaidanWardak province.

HamidullahAzimi, in charge of NFP in Ghor, said the Taliban had prevented the implementation of the scheme in Shahrak and Talak districts of the province.

GhulamSakhiSabooryar, administrative chief of Shahrak district, said: “Taliban demand their share from people and residents have complained to us that the militants have barred implementation of NFP program in their areas.

A resident of Shahrak, said: “The Taliban are preventing the government assistance to reach us, they demand share in the NFP program, if we give them a share what will remain for us.”

Mohammad Rassoul, director of Baghlan’s rural rehabilitation and development department, said a number of unidentified militants in the Tajikan village of Baghlan district had barred the NFP implementation, but the issue was addressed through the mediation of tribal elders.

He said the Taliban were cooperation with him in distribution of the food items and did not take money from the program.

Eng. BasitAini, rural development director for Balkh, also said some “local strongmen and commanders” in the province had created problems for

the NFP, but tribal elders sorted out the issue.

According to him, the NFP is being implemented normally in other districts of the province and no one, including the Taliban, has created any problem.

The NFP has not yet been extended to districts of Helmand, it has not been launched due to fighting in Kandahar’s Panjwai district and is running normally in Kunduz.

Attaullah Afghan, head of Helmand’s provincial council, said the NFP program had not yet been launched in the province’s districts, but was launched the provincial capital earlier this month.

Kandahar Rural Rehabilitation and Development director NasimAyubi denied that the Taliban had barred implementation of NFP in 52 villages of the district or had demanded 10 percent share. He said the NFP had not yet been started in the district due to security concerns.

Dost Mohammad Raihan, director rural rehabilitation in Kunduz province, said the NFP was running smoothly in Aliabad and Kunduz districts of the province without any problem.

“The program has not been threatened by the Taliban or any other group so far and if they do so, we will never give them any share,” he added.

The NFP is implemented by the Ministry of Rural Rehabilitation under the Citizen Charter Program.

PopalHabibi, the ministry’s deputy director of programs, said the NFP had to be suspended in some districts due to numerous problems.

He added: “We faced problems in some districts and we stopped the program there, the Taliban’s demand of 10 percent share is not the only problem but cold weather, insecurity and other issues are also a factor. We have come to know that there are some claims about Taliban’s demand for money, but we have not received anything officially. We have directed provincial officials to probe the matter.”

He did not reveal in which province the NFP faced problems.

BaktashMusawir, public relations officer for Citizen Charter program, said: “We reject the Taliban want share in some areas and so far we have not faced any such serious problem.”

Taliban spokesman, ZabihullahMujahid said it was their condition that such programs should be implemented in cooperation with them in a transparent manner in order to identify poor families and prevent corruption.

NFP in some districts
- Advertisement -