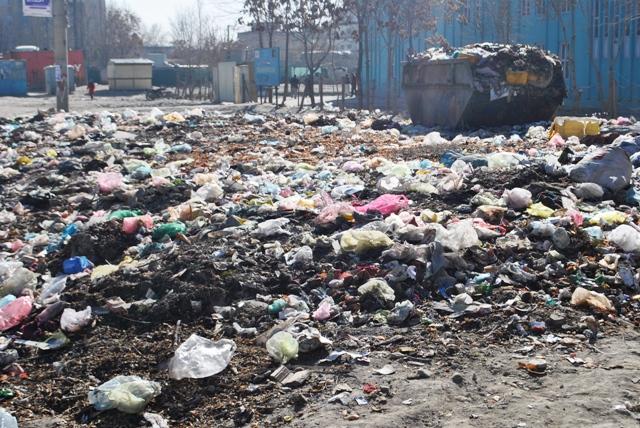 FARAH CITY (Pajhwok): Residents of this capital city of western Farah province are complaining about uncollected garbage heaps in different parts of the city, saying the waste is causing many diseases.

The residents accuse the city municipality of poor management and incompetency and ask the local administration to take practical steps for resolving the problem.

Abdullah Rahimi, a resident of the fifth police district of Farah city, told Pajhwok Afghan News that the municipality had failed to keep the city clean.

Garbage piles could be seen in every street and corner of the city but the municipality would not bother to take them away once in a month, he said.

He said that the presence of high amount of garbage in the city in hot weather was a source of many diseases and people were fed up with the odor.

“I have contact with a man in the municipality, we begged him many times to collect the garbage, but he collected it only in one location from the whole fifth police district and that too partially,” he said.

Meanwhile, Ghulam Yahya, a resident of the second police district of Farah city, who lives only 200 meters away from the municipality department, said garbage piles in their area were left uncollected for weeks.

Abdul Naser Zeyar, a civil society activist in Farah city, said: “Unfortunately the municipality has failed to collect the garbage from the city based on a program, people always complain about the negligence of the municipality on social media and in the real life…”

He said that if the municipality had no resources or could not manage its responsibilities, then the cleanness should be given to a private company so people would get rid of this situation.

Pajhwok tried to contact Najibullah Adabyar, Farah municipality head, but he refused to comment on the regard.

Deputy Farah governor, Mohammad Daud Shirzad said that he had no information on the regard.

Provincial council head, Dadullah Qanay endorsed complaints of Farah people and said that he received complaints about poor services of municipality from people on a daily basis.

According to an official of Farah municipality, there are four garbage trucks with the municipality but one of them is inactive. The official acknowledged poor management of the municipality and said that the department had no cleanness programs for Farah city.