Despite rise in unrest, civilian casualties down last week 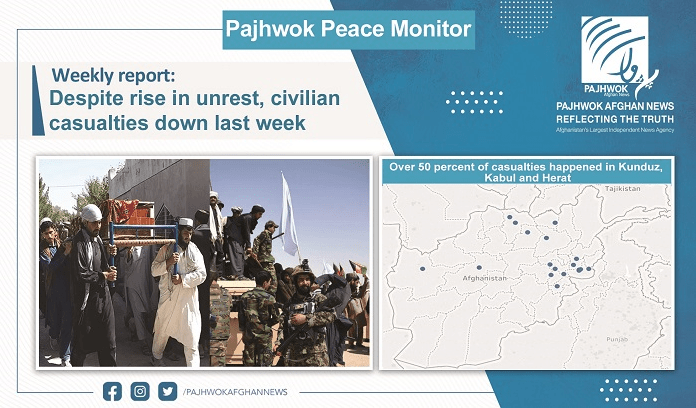 Despite rise in unrest, civilian casualties down last week

In the last one week, 44 civilians were killed and 65 others injured in 18 attacks in 11 provinces including (Kunduz, Kabul, Herat, Nangarhar, Laghman, Logar, Balkh, Baghlan, Paktia, Ghor and Samangan).

Despite Taliban’s increased attacks and escalated violence in various parts of the country and fall of a number of districts to the Taliban last week, civilian casualties were less compared to the previous week.

In these attacks, security forces and the Taliban also suffered casualties but Pajhwok did not publish the figures because enough information with authentic sources was not available to support casualty figures.

UN special envoy for Afghanistan, Jean Arnault last week expressed concern over increased violence in the country and termed the ongoing situation as unacceptable for the UN and peace supporters.

The government’s negotiating team and the Taliban say that contact groups of both sides had discussed the management of peace talks.

The meeting between the Taliban and government negotiators came a day after the European Union emphasized the need for the start of real peace talks.

Around 10 months had passed since the first start of intra-Afghan talks in Doha, but the two teams have agreed only on the procedure of negotiations.

Some sources told Pajhwok that efforts were underway in Kabul to create a delegation to be comprised of several members including chairman of High Council of National Reconciliation (HCNR), Dr. Abdullah Abdullah and former president, Hamid Karzai to travel to Doha for peace negotiations. However, Taliban termed these reports as media speculations.

US officials have stressed on support to Afghan forces and continued assistance to Afghanistan and said that they jointly worked with the international community for establishment of peace in the war-torn country.

NATO also last week in Brussels conference said that the alliance would fund Afghan forces and their training outside Afghanistan, ensure permanent civilian presence in Afghanistan and protect infrastructures including Kabul Airport.

Iranian foreign ministry said that the problem in Afghanistan had no military solution and the country supported peace.

Pakistani foreign minister, Shah Mehmod Qureshi also said that his country was ready for supporting a peaceful solution in Afghanistan.

However, Pakistani foreign ministry said that Pakistan alone should not be held responsible for ending the Afghan war, but all should work together for solving the problem. Pakistani foreign minister, Shah Mahmod Qureshi said that there were circles outside and inside Afghanistan who were against peace in order to secure their own interests in war.

In an interview with Tolo News, Qureshi said that high violence from Taliban was a claim ‘exaggerated’, and there were other insurgent groups such as Daesh or Islamic State involved in recent violent incidents in Afghanistan.

Mohib in a tweet said, “This comes as Taliban launch violent offensives against Afghan people across the country, we know how and why they continue to be enabled to do this. Qureshi is either uninformed, ignorant or accomplice. Maybe he also rejects that, Osama was found next to Pakistani Military HQ.”

Afghan and Pakistani officials in the past had also exchanged such statements.

Exceptional situation and no adequate preparedness:

HCRN chairman, Abdullah Abdullah said that an exceptional situation was created after the announcement of foreign forces withdrawal from Afghanistan, but ‘we failed to get preparation for the situation as what is needed.”

He said that ongoing conflicts had worried people and Taliban believed that they could win militarily. The problem of Afghanistan has no military solution and if the Taliban think they would win militarily, they are wrong, he added.

A number of residents of Paktia province protested against the increase in violence in the country and asked for peace, saying the US and international community were not honest in ending the Afghan war.

Tribal elders and parliament members from Nangarhar province in a meeting also expressed concern over increased violence in the country and stressed on ceasefire. They said that continuation of war would lose the chance for peace and it would plunge the country into a civil war.

Hundreds of youths in Nangarhar launched ‘National Peace Campaign’. The campaign has implemented public awareness programs about peace in the provincial capital, Jalalabad city and a number of districts of the province. Participants of the campaign stressed on peace talks and worried that the ongoing war would create disaster if it was not ceased.

Mohammad Karim Khalili, head of Hizb-i-Wahdat party, in a meeting said that the current opportunity for peace should be availed and that the Afghanistan problem had no military solution.