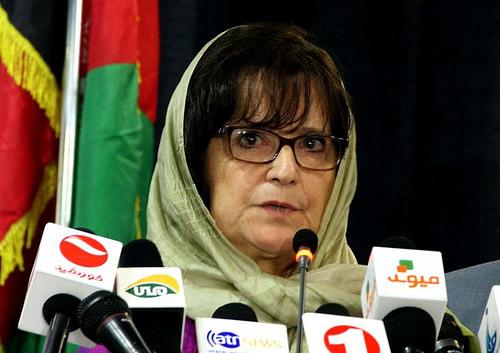 KABUL (Pajhwok): The United Nations envoy to Afghanistan on Tuesday warned the country was sliding towards “dire scenarios” as Taliban militants were making significant gains, adding it was ordinary Afghans who pay the heaviest price.

UN peace envoy Deborah Lyons said the Taliban fought daily battles with government troops and captured 50 districts since May, when the US began its final exit from a two-decade war.

“The possible side toward dire scenarios is undeniable,” Lyons told the UN Security Council.

Violence in Afghanistan has flared nationwide and talks between the militants and the Afghan government have been gridlocked for months.

“All of the major trends — politics, security, the peace process, the economy, humanitarian emergency, and of course, Covid — all of these trends are negative or stagnant,” Lyons said.

In the past 24 hours alone, the Taliban fighters took control of nine districts in three provinces – Balkh, Kunduz and Uruzgan – the latest significant gain made by the group in recent weeks.

“Most districts that have been taken surround provincial capitals, suggesting that the Taliban are positioning themselves to try and take these capitals once foreign forces are fully withdrawn,” Ms Lyons said.

She said for the Taliban to continue this intensive military campaign would be a tragic course of action and it would lead to increased and prolonged violence that would extend the suffering of the Afghan people and threaten to destroy much of what has been built and hard won in the past 20 years.