Release of Taliban prisoners was a mistake, says Ghani 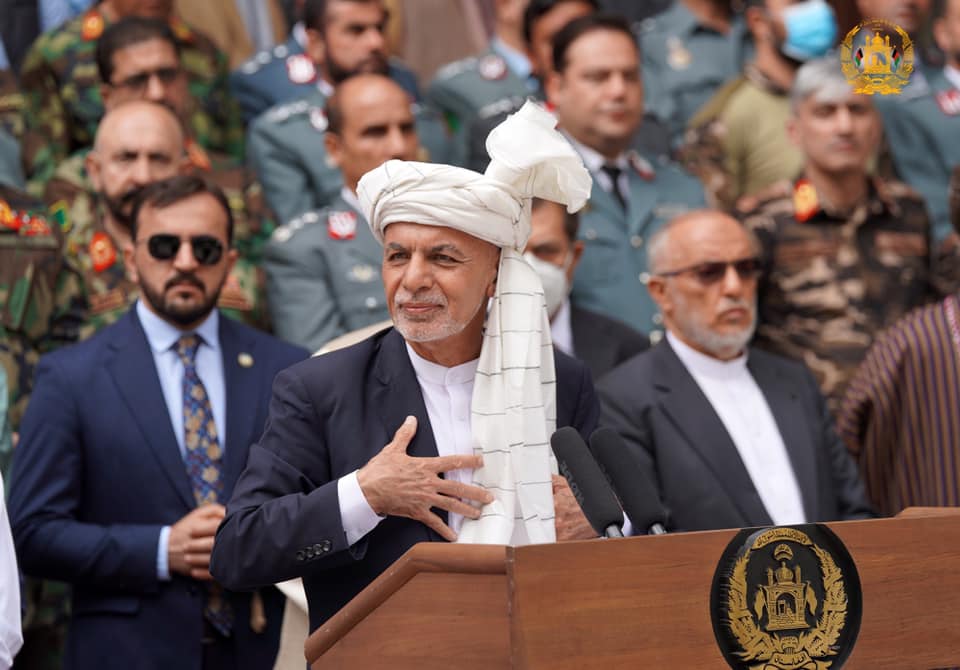 Release of Taliban prisoners was a mistake, says Ghani

KABUL (Pajhwok): President Ashraf Ghani on Tuesday said the Taliban were not committed to peace and hinted at a new plan to change the situation, saying political interference in the security sector was behind the fall of some areas.

After offering Eid prayers at the Presidential Palace, President Ghani paid tributes to the security forces, saying they rendered great sacrifices and this year’s Eid was named “Soldier’s Eid”.

“The situation has become dire, but our security and defense forces sincerely defended the soil and honor by offering many sacrifices in the last 20 years, especially in the last three months,” he added.

The president said worked last week on a plan to change the war situation and in one part to identify security forces’ priorities.

He said national defense was needed in the current situation as every city in the country was a model of development and today’s Afghanistan was not like it had been 20 years ago.

The president says the current war was not just to protect the system, but to protect life and property, and that every citizen was defending his homeland, his capital, his future and what he has.

He praised the efforts of security forces and uprising forces which he said should work within the framework of the government because the time had gone to form militias.

Ghani, referring to the visit of a delegation led by Dr. Abdullah Abdullah, head of the National Reconciliation Council, to Doha and two days of talks with Taliban representatives there, said the government sent the delegation to Qatar to try for peace.

But he accused the Taliban of having no intention of making peace. “If you are Afghans, come and unite within the framework of Afghanism. Do you have a positive message for the people of Afghanistan, especially women? ”

The two-day meeting in Doha took place before Eid and according to reports, the meeting agreed to speed up peace talks in order to find a just and lasting solution to the Afghan problem.

President Ghani said the Afghan government had released 5,000 Taliban prisoners, but most of them went to the battlefield. “It was a mistake to release 5,000 prisoners because the Taliban have not yet started peace talks.”

According to him, the nation should now ask the Taliban why they are destroying facilities, conducting kangaroo trials and planting bombs.

Ghani said the Taliban destroyed 260 public buildings in the fighting and if the Taliban were Afghans, they should stop destroying public property and not destroy people’s homes.

However, the Taliban deny such claims.

The president asked the Taliban if they wanted foreign fighters like Lashkar-e-Taiba, Jaish-e-Mohammad and Al-Qaeda to turn Afghanistan into a battleground for “foreign terrorists”?

He said the Afghans did not know what the Taliban had promised to these groups, but the Afghan people would not allow their country to become a battleground for terrorist groups.

“Our message is life, prosperity and progress,” Ghani said. “We are ready for a great change and our Islamic culture will never change. We are Muslims from the cradle to the grave, but we do not want death and we stand against the invasion on life.”

But President Ghani said: “The fall of some areas was not a deal and the names of those who have made the deal will be challenged hundreds of years later.”

Ghani said the handover of areas by security forces to the armed opposition was an insult to the “sacred uniform” and that he, as the commander of the armed forces, did not accept that politicians should interfere in the security sector.