Civilian casualties drastically down last week amid calls for truce 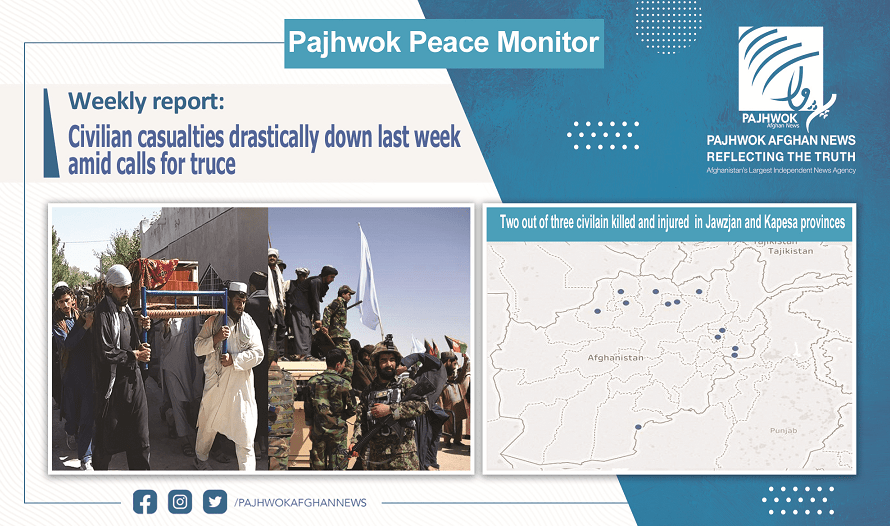 Civilian casualties drastically down last week amid calls for truce

KABUL (Pajhwok): There were 117 casualties last week, compared to at least 433 civilians in the previous week amid US airstrikes on the Taliban and international calls for reduction in violence. The Taliban said they were ready for peace and interaction with the world. 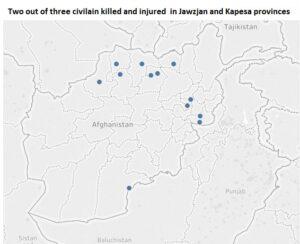 The 117 civilians suffered casualties at a time when a reduced number of attacks were staged during Eid_ul Adha holidays including a rocket attack on the first day of the religious festival.

The International Committee of the Red Cross has expressed concern over recent spikes in violence, saying civilians face a humanitarian crisis.

Government, Taliban threatens each other:

President Ashraf Ghani said latest attacks showed the Taliban had no will for peace, adding that he had chalked out a new plan for change in the situation in the next three to six months. He has assured commando forces of provision of every facility they needed in the fight against Taliban militants.

Ghani alleged that the Taliban wanted to bring thousands of Jaesh-i-Mohammad and Lashkar-i Tayyeba men to the country, but the Taliban rejected his claim.

In his Eid message, Taliban supreme leader Mullah Haibatullah said the Taliban were committed to resolving the conflict through talks and added the government was losing this chance.

He also warned in response to the president’s new plan that in the next six months, the government would be responsible for all military operations.

US officials confirmed carrying out airstrikes on the Taliban in support of Afghan forces and asked the rebels to shun violence and fully participate in the peace talks.

The Taliban called the airstrikes as against the Doha agreement and said that besides their fighters, civilians also suffered casualties in the attacks.

Taliban say ready for peace and interaction with the world:

Taliban’s  Qatar office spokesman Dr. Mohammad Naeem said their representatives met with representatives of European Union, the US, UNAMA, Qatar, Germany, France and Norway. Hosted by Italy, the Taliban told the meeting that their peace policy remained unchanged as they did not want power monopoly and would not interfere in the affairs of others and would allow to one to interfere in Afghanistan’s affairs.

He said they had urged the international community to play active role in Afghanistan’s rehabilitation and the Taliban were committed to human rights, women’s rights as enshrined in Islam and their education and were ready for interaction with the world.

Last week High Council for National Reconciliation chairman Abdullah Abdullah heading a delegation travelled to Qatar for talks with the Taliban representatives. In a joint statement after the two-day talks, it was said the meetings insisted on acceleration of peace talks.

Members of the delegations said the meetings in Doha called for acceleration of peace talks, their continuation and effectiveness.

Similar expressions were made after meetings between the negotiating teams of both sides during the past 11 months.

A number of religious scholars recently called on the Taliban and the government to declare ceasefire.

Similarly, the youth in a gathering in Kabul urged the warring sides to declare ceasefire for durable peace and pay attention to youth rights in their peace talks.