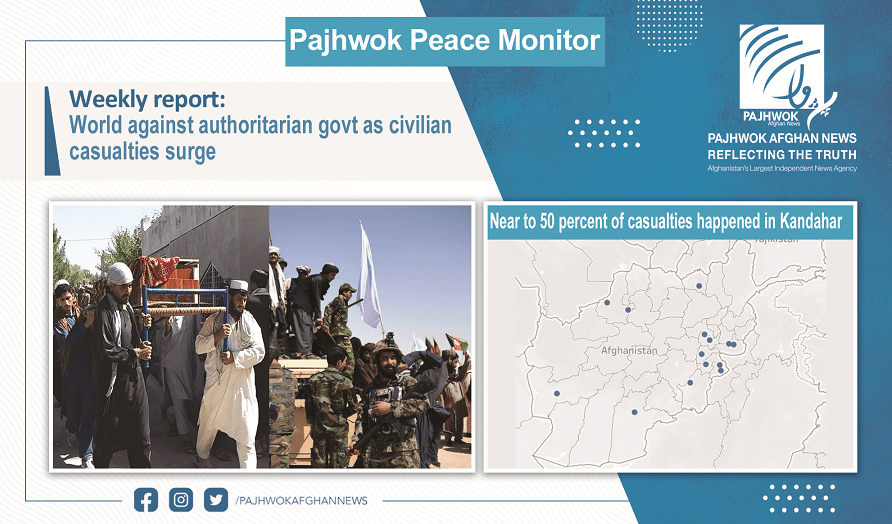 KABUL (Pajhwok): The international community has expressed its opposition to an authoritarian government in Afghanistan where civilian casualties soared last week to 294 killed and wounded from 117 casualties the previous week. 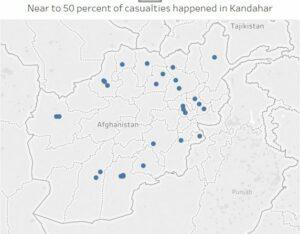 According to Pajhwok weekly casualties report, on average everyday 20 people were killed and injured since the beginning of ongoing solar year (1400).

Government forces and Taliban insurgents also suffered casualties in these attacks, but Pajhwok did not publish the figures due to lack of correct information in this regard. The United Nations Assistance Mission in Afghanistan (UNAMA) last week expressed concern over growing civilian casualties and said Afghan civilian casualties surged by 47 percent in the past six month. According to UNAMA, 573 civilians were killed and 1,210 others injured during the period.

UN Security Council has said that Al Qaeda is present and active in 15 provinces of Afghanistan. Al Qaeda leader Aiman Al Zawahiri lives in Afghanistan and is suffering from an illness. Daesh group is also active in south and southeastern parts of Afghanistan.

Chinese foreign ministry has said that Eastern Turkistan Islamic Movement (ETIM) was a direct threat to Chinese national security and hoped that the Taliban will take action against the group in Afghanistan.

Afghan President Ashraf Ghani has said the Taliban have strong ties with regional terrorist organizations. But the Taliban said they have no foreign agenda and will never allow any group to use Afghanistan’s soil against other nations.

US, EU and British representatives asked Afghan government and the Taliban to enter ceasefire and an inclusive transitional government before reaching final agreement on the future of Afghanistan.

Chinese official during the Taliban’s delegation trip to China said they hoped the Taliban will play a vital role in ending ongoing conflict and reconstruction of Afghanistan in the future.

UNAMA has asked Afghan government and the Taliban to return to the table of talks and end violence. The UN body said international community was striving for peace and developing regional and international consensus on peace.

Opposition to government comes through force:

UNAMA Chief Debora Lyons has termed negotiations and reconsidering difficult points in talks as the only way to resolve Afghanistan conflict and added no international donor will provide support to an authoritarian government in Afghanistan.

Indian Foreign Minister Jaishankarsaid New Delhi agreed with the US to oppose any government in Afghanistan that comes through force.

US Foreign Secretary Antony Blinken believed negotiations were the only way to settle things in Afghanistan. He added Afghanistan’s neighbors and any other country did not want the Taliban to take over government by force and install Islamic Emirate.

This comes as US Secretary of Defense Lloyd J. Austin said that US conducted airstrikes in support of Afghan security forces. “If the Taliban continued their attacks, we are ready to increase our support.”

The Taliban without providing detail stressed the installation of Islamic system in Afghanistan and renewed their commitment to peace and warned to retaliate if the US continued their airstrikes.

State Ministry for Peace Affairs said the Taliban wanted an Islamic system based on the 1964 Constitution when kingship was ruling in Afghanistan but the people of Afghanistan wanted democracy.

But the Taliban said as whole the people of Afghanistan wanted an Islamic government. Government should be based on Islamic principles not copied from any western country.

Afghan president without going into detail said he would not surrender to strategies formed outside the country that would convert Afghanistan into battle ground.

This is worth mentioning that Afghan republic side and the Taliban have been talking over the past 11 months in Doha but the talks are underway at slow pace and yet to yield a positive outcome.

Last week, public gatherings in Kandahar and Germany demanded the ongoing conflict to be stopped and asked Afghan government and the Taliban to enter ceasefire.  Similarly, political parties’ sub-committee called on the Taliban to reconcile instead of continuing the conflict.

In Balkh participants of a gathering said that some of Afghanistan’s neighbors were still in search of their nefarious designs in the peace process of Afghanistan. They asked the international community to play their role in Afghanistan’s peace and stability.