KABUL (Pajhwok): The UN Security Council (UNSC) has demanded a halt to the on-going conflict in Afghanistan and resumption of peace talks amid escalating violence and increasing civilian casualties. 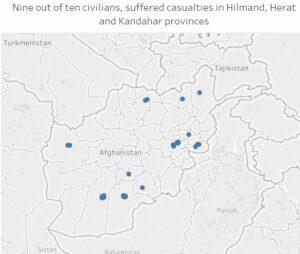 According to Pajhwok Afghan News weekly casualties’ reports, last week was deadliest so far this year as far as civilian casualties are concerned

According to the Afghanistan Independent Human Rights Commission report in the first six months of 2021, 1,677 civilians were killed and 3,644 other injured. This casualty figure is 80 percent higher compared to civilian casualties that happened in the corresponding period last year.

The UNSC in its Friday meeting on Afghanistan has asked conflicting sides to immediately stop fighting and start talks. The Secretary-General’s Special Representative Deborah Lyons said: “Ahead lies either a genuine peace negotiation or a tragically intertwined set of crises: an increasingly brutal conflict combined with an acute humanitarian situation and multiplying human rights abuses.”

Lyons, who also heads UNAMA, urged the UN Security Council to work to prevent Afghanistan from descending into a catastrophic situation.

She believed the Security Council and the broader international community could help prevent the direst scenarios. But quick and unified action would be required, she explained.

She demanded sanctions on Taliban leadership should be linked with genuine progress in peace talks.

The UNSC said the council will not support political structure in the name of Islamic Emirate in Afghanistan again. The UN body also expressed its concern over reports of growing human rights violations in Afghanistan.

Newly elected Iranian President Syed Ibrahim Raeesi while stressing over regional consensus on Afghan peace process said Tehran will support a legitimate system, the rights of Afghans and a peace process in Afghanistan.

Last week, the European Union (EU) said it will continue supporting Afghanistan if there is a peace agreement which is inclusive and acceptable to all sides.

The US Embassy in Afghanistan again stressed on ceasefire.

International efforts for peace and ceasefire are underway at a time when the conflict has intensified in Afghanistan.

Besides scattered fighting nationwide, the Taliban and Afghan forces fought heavily in the capitals of Helmand, Kandahar, Nimroz, Jawzjan and Herat provinces.

According to latest reports, Zaranj, the capital city of Nimroz province, and Shiberghan, the provincial capital of Jawzjan, had fallen to the Taliban while fighting is underway currently in Helmand’s capital Lashkargah, Kandahar City and Sar-e-Pul City.

On ceasefire, Taliban spokesperson ZabihullahMujahid said: “All these things are practical if Doha agreement is fulfilled in its true spirit and appropriate time so now we would have reached peace. Even now for reconciliation the implementation of Doha Agreement is the best way for us. Talks should be considered seriously and this process should move ahead sincerely.”

He asked people to unite against the Taliban and their foreign affiliates and also called on the Taliban leadership to renounce fighting and allow the people of Afghanistan to decide their future.

Some residents from Helmand, Kandahar, Uruzgan and Zabul provinces have erected a tent in front of UNAMA office in Kabul and have been demanding ceasefire and addressing the problems of displaced persons.

In Balkh, some youth and civil society activists during a gathering demanded ceasefire and said human rights are violated in fighting.

Hundreds of Afghans staged rallies in France and Canada to support Afghan security forces and democracy.

Some ulema in a gathering said on-going fighting in Afghanistan has no Islamic legitimacy, the Taliban and government should choose the path of reconciliation.

Religious scholars in Kunar held a gathering in support of government and called on Pakistani scholars to stop middling in Afghanistan’s internal matters and stop issuing pro-jihad fatwas in Afghanistan.

They asked the conflicting sides to accelerate meaningful talks because this conflict, the victims of which are Afghans, was no more affordable.