Major events of the week

Twenty-three civilians were killed and 24 others injured as a result of airstrike, stampede in rallies and at Kabul Airport last week. 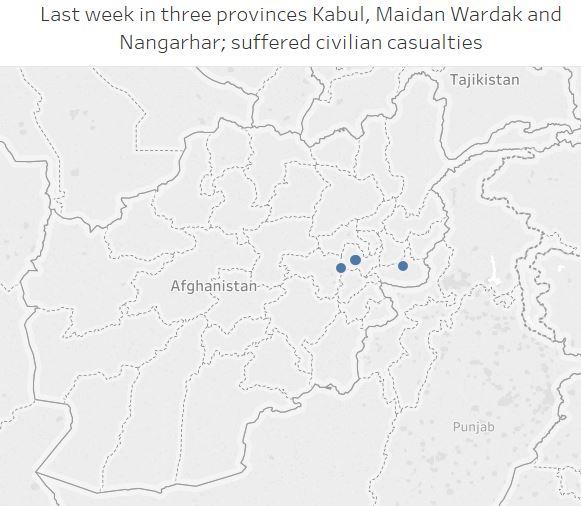 US and its allies invaded Afghanistan in 2001 after 9/11 attacks in the US. The Taliban government was toppled. After a lengthy war, the US and the Taliban signed a peace agreement last year in February according to which all US forces will leave Afghanistan.

The Taliban captured Kabul on August 15 and Afghanistan President Ashraf Ghani fled to the United Arab Emirates at a time when some US forces were still in Afghanistan. These US troops are in Kabul airport to ensure the evacuation of US citizens in Afghanistan and some Afghans who worked with the US in the past 20 years.

Former President Ashraf Ghani in a video message said that in order to prevent bloodshed he fled the country and he was forced to do so. He added he was consulting to return to Afghanistan. Some Afghans hit back at Ghani for fleeing the country and leaving people and institutions with unknown future.

Ghani’s first deputy AmrullahSaleh is said to be in Panjshir. Saleh claimed he was the caretaker president of Afghanistan according to the Constitution. He also announced resistance against the Taliban from Panjshir.

US president, Joe Biden said that very strict conditions would be made for the international legitimacy of Taliban.

The US national security advisor, Jake Sullivan, however, said that any future government in Afghanistan should accept international responsibilities, but the US suspended assistance to Afghanistan considering the ongoing situation in the country.

NATO Foreign Ministers’ meeting on Afghanistan in a joint statement voiced on all sides in Afghanistan to work for an inclusive government, protection of the rights of women and minorities as well as ensure that Afghanistan will not be used as terrorist sanctuary.

UN secretary general AntónioGuterres in a message to Afghan people said, “I want to extend a special message to the people of Afghanistan during this trying time: (The UN) is with you and committed to staying and delivering, helping to advance peace, opportunity and human rights for all.”

The UNSC voiced on the Taliban to resolve the ongoing crisis in Afghanistan through a political solution and do not allow Afghanistan again used as terrorist safe haven.

China, on the other hand, asked the Taliban to stay committed to forming an inclusive Islamic government and said that the Taliban were interested to have good relations with China.

Another report shows that Chinese foreign minister during a phone call with his British counterpart said that the international community should help Afghanistan instead of mounting more pressure on the country.

Russian envoy to Afghanistan, Dmitry Zhirnovsaid, “We cannot ignore realities, Taliban are currently leading Afghanistan, there is no any other alternative for Taliban in Afghanistan.”

ZabihullahMujahid, Taliban spokesman, said that they were consulting with the country’s politicians on forming an inclusive Islamic government and the Taliban wanted good relations with their neighbors.

He said US and European countries should deal with the Taliban politically and should recognize Afghanistan as an independent nation.

The Taliban made it clear they had no enmity with anyone and will ensure the security of everyone including embassies, women will be allowed to study, work and enjoy other rights through Sharia Law, media would be allowed to work freely under Islamic and national values.

This comes as HIA leader GulbuddinHekmatyar, Former President Hamid Karzai and Peace Council Chairman Abdullah are striving for an inclusive government in Afghanistan. But some political leaders such as SalahuddinRabbani, Mohaqiq and KarimKhalili are in Pakistan.

Some women last week rallied in front of Taliban armed personnel and demanded their civil rights — opportunity for work, education and political participation. They said women comprised half of the society and should be given their rights.

This is worth mentioning that currently women are active in media and appear on media screens.

Earlier some people believed that soon after the Taliban entry to Kabul women would be banned from going out of their homes.