KABUL (Pajhwok): Last week, 39 civilians suffered casualties in Afghanistan, including the 13 people killed in US airstrikes. The rest of casualties resulted from celebratory gunfire incidents.

According to reports, last week 13 civilians were killed in Kabul and Nangarhar province as a result of US airstrikes, but US claimed Daesh militants were targeted in these attacks.

On September 3 night Kabul and other provinces witnessed heavy celebratory firing after fake news regarding the capture of Panjshir province circulated among Taliban. According to reports, 2 people were killed and 10 others injured in these firings in Nangarhar and 14 people injured in celebratory firing in Kabul. 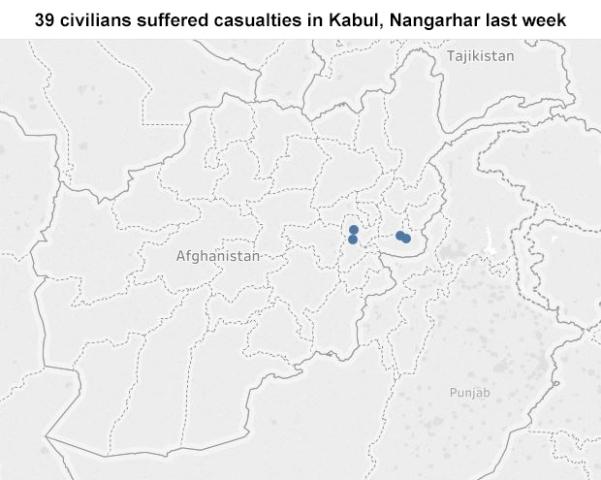 The Taliban strictly demanded of their fighters to refrain from celebratory firing in the future and pay thanks to Allah instread of firing.

The previous week, 59 people were killed and 133 others injured as a result of blasts close to Kabul Airport. Those killed and injured were civilians among those who wanted to flee Afghanistan.

Panjshir is the only province the Taliban have not captured so far. The Taliban last week launched assault on Panjshir province and there are reports of heavy losses on both sides. Pajhwok refrained from publishing casualtis reports on Panjshir because there was no cridable information available.

The last batch of US forces left Afghanistan on the night of August 30th ending the longest US war in its history. The US officially made this announcement while the Taliban declared “Afghanistan is completely independent and got its freedom.”

US President Joe Biden said the fight against terrorism in Afghanistan and other nations will continue in different manner. He warned Daesh and added the US fight against Daesh has not ended and would take revenge of Daesh last attack on US forces in Kabul.

US Special Representative for Afghanistan ZalmayKhalilzadsaid the people of Afghanistan will have an opportunity to take decision regarding the future of their country.

Nineteen days have passed since the Taliban’s takeover of Kabul, but the movement is yet to declare its government.

However, political affairs experts say that if the Taliban failed to form an inclusive, justice-centric and acceptable to all Afghans government, it would push the country into poverty and more migrations abroad.

On the other hand, the Taliban say that they have consulted with a number of Afghan politicians including former president, Hamid Karzai, Dr. Abdullah Abdullah, GulbuddingHekmatyar and some others about creation of an inclusive government.

The group says that they would soon declare an inclusive government in which all political parties and people would be represented.

Recognition of the new administration

The White House last week hoped for the Taliban’s commitment to their responsibilities and said that the US and its allies were not in rush to recognize the Taliban.

The US says that it would run its diplomatic mission with Afghanistan form Qatar and the country had another plan to provide humanitarian assistance to Afghans through UN and NGOs.

US and allies in no hurry to recognize Taliban: WH

The British foreign ministry made similar statements about the recognition of a new government in Afghanistan and said that that they need direct negotiations with the Taliban so the group would assure the international community about the promises it had made. However, Britain did not provide details about the Taliban’s pledges.

Meanwhile, a British delegation during a meeting with Taliban officials in Qatar has said that they had increased their humanitarian assistance with Afghanistan by double and they are ready to continue its assistance with the Islamic Emirate in the future.

Qatari foreign ministry, however, said that isolation of the Taliban would create another disaster in Afghanistan while partnership with the country would help bring positive outcome.

German foreign ministry says that talks with the Taliban are the only option and practical steps should be taken for resolving current problems. The country said that instability in Afghanistan was not tolerable and it would further fuel terrorism.

Turkish envoy to Qatar, Dr. Mustafa also assured Afghans of his country’s continued support and hoped for establishment of a strong government acceptable to all Afghans.

The UN earlier had said that it would stay with Afghans for strengthening peace and realization of people’s rights. China, on the other hand, has said that the international community should provide needed assistance to Afghanistan instead of mounting pressure on it.

Russia has said that the Taliban were the current authorities of Afghanistan and there was no any alternative to them now.

Officials of Accord and Development Front in a meeting have said that the Taliban should declare its government as soon as possible to fill the current political vacuum.

GulbuddinHekmatyar, head of Hizb-i-Islami Afghanistan (HIA) party, in a meeting said that it would support an Islamic, committed, unbiased and independent government even if there is no any member of his party in it.

On the other hand, a number of women who took to streets in Kabul voiced on the international community and the Taliban to protect their rights in political, economic and social areas and secure the gains made over the last two decades in Afghanistan.