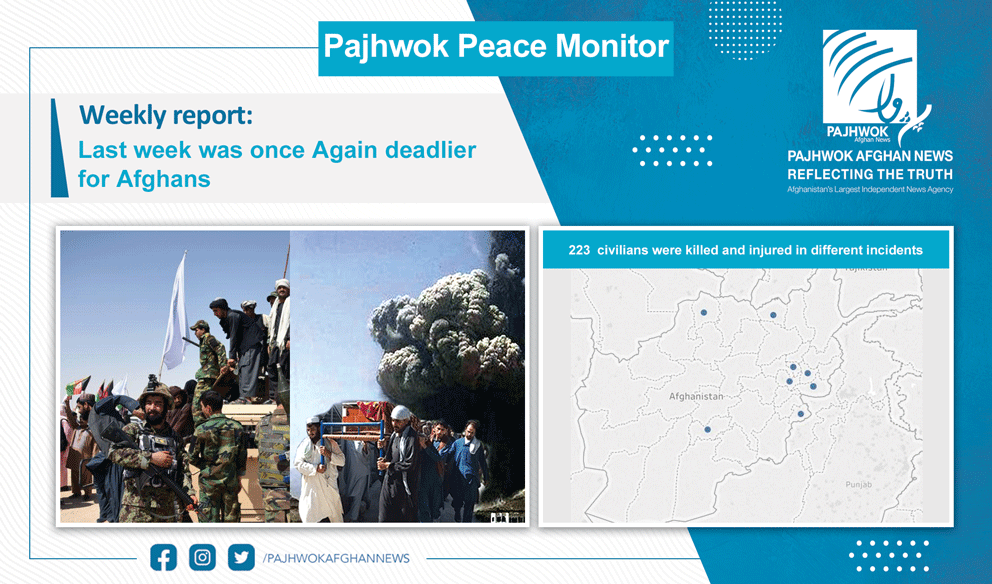 KABUL (Pajhwok): Last week was once again deadliest for Afghans as 223 people suffered casualties amid accelerated diplomatic efforts on international level for resolving problems in the country.

According to reports last week 58 people were killed and 165 others injured in different incidents of violence in the country.

The deadliest incident last week happened in Kunduz province where 46 civilians were killed and 143 others injured in a suicide attack. Daesh or Islamic State (IS) claimed responsibility for the attack.

Elsewhere, three people including a journalist were killed and three civilians injured in two incidents in Nangarhar province.

One person was found dead in Nangarhar. In Jawzjan province, a bride was killed and two people were injured after a person hurled a hand grenade to a wedding party. Two people were killed and three others injured in an explosion in a gathering of people attending the funeral of the mother of ZabihullahMujahid, deputy information and culture minister.

No groups have so far claimed responsibility for these attacks and explosions. 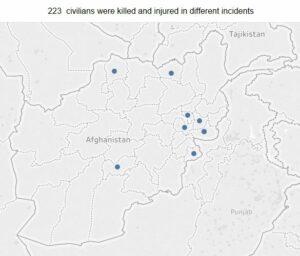 A week before 16 civilians were killed and nine others wounded in various incidents.

Taliban took control of Kabul around one and a half months ago. Different countries made different reactions to the development.Some were harsh such as freezing of Afghanistan cash reserves by the US that prompted economic, cash and banking crisis in the country. Some countries such as China, Russia and others showed soft reaction.

Russia invited officials of the Afghan caretaker government to participate in Moscow conference scheduled for October 20. The conference is expected to also be attended by officials of China, India, Iran and Pakistan.

For the first time after the Taliban’s takeover of Kabul, Afghan caretaker government officials and US officials are negotiating in Qatar.

US Department of State in a statement on Friday said that a high level delegation of US had reached Qatar for talking with current Afghan officials. The source said that the delegation would discuss human rights, humanitarian aid, women’s rights and inclusive government in Afghanistan with Afghan officials.

A delegation of the Afghan government also arrived in Qatar to discuss the current situation of Afghanistan with representatives of some foreign countries. Afghan officials say that the delegation will meet with Qatari and some other countries’ representatives.

British prime minister’s representative has said that his country would continue humanitarian aid to Afghanistan and his country would make its relations with the new Afghan government in consideration to the situation.

Uzbekistani foreign ministry assured that they would hold on to its pledges regarding transit, energy and commerce areas with Afghanistan. The ministry said that the new Afghan government would soon find its strong position in the international community.

French president asked G20 member countries to send a clear message to the new Afghan government about its recognition and set conditions for it.

“Recognition on the international level requires a cost, equality of men and women’s rights is an issue which we emphasize on and it is a condition for recognition,” he said.

Denmark foreign minister termed the situation in Afghanistan as worrisome and said that it would not recognize the new Afghan government. It said that the world should stop Afghanistan from turningin the ‘center of terrorists’.

The UN has voted to create a new special rapporteur on Afghanistan to probe violations carried out by the Taliban and other parties to the conflict. However, China, Pakistan, Russia, Eritrea and Venezuela opposed the motion.

Taliban in reaction to the announcement said that the UN should take those accountable who oppressed Afghans and destroyed Afghanistan in the last two decades.

Traders and industrialists in Paktia province a meeting last week asked the international community to unfreeze Afghanistan assets as Afghans were in serious economic problems.

Some teachers asked the Ministry of Education to reopen high school for girls. Currently, except for two provinces (Balkh and Kunduz), girls in the sixth grade are not allowed to go to school, but officials say that will happen in the near future.

A university lecturer in Kabul and his family members wore shroud-like white robes in protest of the government’s and the world’s indifference to the country’s economic woes and said the country’s children were destined to continue their education.