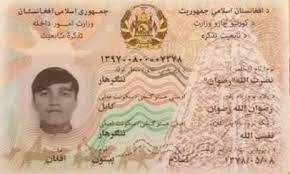 KABUL (Pajhwok): A number of people in Kabul who are in need of electronic identity cards on Sunday called for resumption of distribution of e-ID cards, saying the service is yet to be started despite government’s announcement.

A week back, the Council of Ministers directed the Ministry of Interior to resume distribution of passports and e-ID cards. Passport Department started its operations on October 5, but the Central Statistics Organization (CSO) did not say anything about launching e-ID cards distribution.

Many of these people complained about the issue. One of them, LidaJamili, a resident of Qala-e-Zaman Khan area of Kabul, said that she filled the ID card form two months ago, but she is yet to receive her ID card due to regime change and closure of the service.

Meanwhile, Qand Agha Azizi, who visited an ID cards distribution center in Sara-i-Shamali area of Kabul, said that he had registered for the service four months ago, but he still did not get the card due to recent changes in the country.

He asked officials concerned to resume the service as soon as possible as some people were in urgent need of ID cards.

Hamid Kaihan, another applicant of ID card, said that his biometric registration was scheduled for August 28, but it was delayed and now he visited the center twice a week.

“I visited this center six times after the collapse of Kabul, but I am told every time that I should come next week, when I come a week later, they repeat the same words, I do not know when will the service start officially,” he said.

A worker of CSO who wished to go unnamed, said that systems were inactivated and most of computers were stolen which is the reason of closure of services; but efforts are on for reactivation of the system.”

A senior officials of CSO in Sara-i-Shamali area talking to a gathering of applicants said that computers and other equipment were stolen from the center and their services were inactive.

He said that the services were not currently available but their technical team was busy to reactivate the system as soon as possible.

The cabinet today announced that e-ID cards distribution should be continued as in the past.