Mosques continue to be target of terror attacks 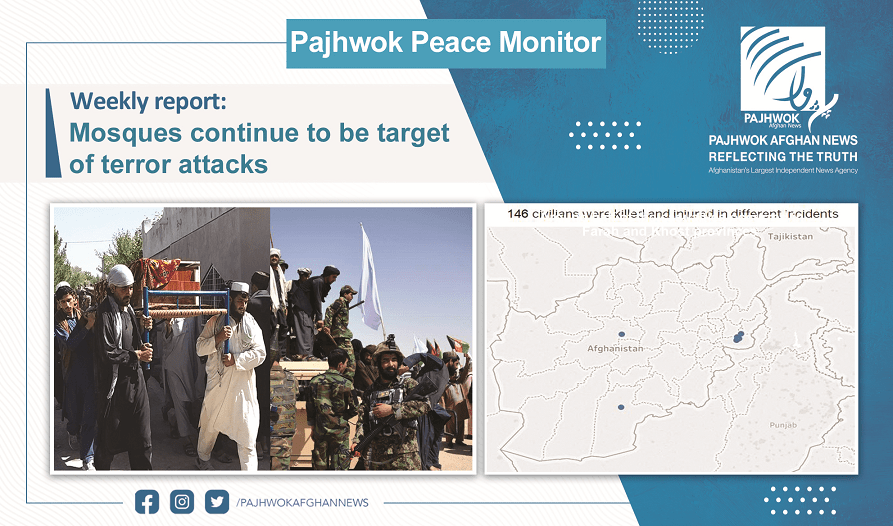 Mosques continue to be target of terror attacks

KABUL (Pajhwok): Amid efforts for humanitarian aid to Afghanistan, the new government’s engagement with the world and its recognition, an attack on another Shiite mosque left 137 people dead and injured last week.

According to reports, 90 people were killed and 56 others wounded in different attacks last week.

The deadliest attack jolted a Shiite mosque in Kandahar City, killing 47 civilians and wounding 90 others. ISIS or Daesh claimed responsibility for the assault.

In Ghor province, unidentified assailants killed former deputy provincial council head and his nephew. No one has claimed responsibility for these attacks. 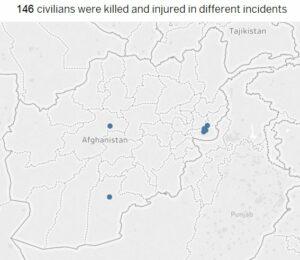 Last week, the United Nations said the economic situation in Afghanistan was deteriorating, urging the international community to step up aid to prevent the country’s economy from collapsing.

According to the Foreign Ministry, Germany’s special envoy promised his country would continue to provide humanitarian assistance to Afghanistan.

The envoy added the current system in Afghanistan was a reality and they would continue their interaction and relations with it.

Last week, the State Department said it was working with allies to respond to the humanitarian crisis in Afghanistan.

The European Commission also said it was providing a package of one billion euros in humanitarian aid to Afghanistan.

The United Nations High Commissioner for Refugees (UNHCR) called on the international community to expedite the delivery of assistance pledged to Afghanistan.

In a letter, the Afghan embassy in Prague asked top 20 countries of the world to provide emergency assistance to reduce poverty and unemployment in Afghanistan.

Taliban took control of Kabul around one and a half month ago. Different countries have come up with different reactions to the development. Some were harsh such as freezing of Afghanistan’s assets by the US. The step caused economic, cash and banking crises in the country.

Last week, Turkey called on G20 member countries to encourage the Taliban to form an inclusive government so that Afghans were no longer forced to seek refuge abroad.

Russia has warned of terrorist groups’ infiltration from Iraq and Syria into Afghanistan, threatening to undermine the stability and security of common regional interests.

According to reports, militant groups are actively sneaking into Afghanistan from Iraq and Syria.

The Afghan government has not yet commented on these reports.

Amnesty International called for the immediate reopening of girls’ schools in Afghanistan.

Pakistan asked the global fraternity to ease sanctions on Afghanistan’s caretaker government. It said the country, if abandoned, could return to the situation of the 1990s.

The Ministry of Foreign Affairs (MoFA) said that weakening the Taliban government was not in anyone’s interest and mounting pressure on Afghanistan had never worked. The ministry asked the international community to follow a better way of engaging with Afghanistan.

For the first time after the formation of the caretaker government in the country, Afghan officials held talks with US diplomats in Qatar last week.

According to the Ministry of Foreign Affairs, Afghan and US officials, during the meeting in Doha, discussed respect for Afghanistan’s territorial integrity, non-interference in each other’s affairs, positive relations and interaction with each other.”

The Afghan delegation termed the full implementation of the Doha Agreement the best way to solve problems and said that humanitarian aid to Afghanistan should not be politicised.

On the other hand, a statement from the State Department said: “The US delegation focused on security and terrorism concerns and safe passage for US citizens, other foreign nationals and our Afghan partners, as well as on human rights, including the meaningful participation of women and girls in all aspects of Afghan society.”

Reports suggest Turkish officials offered the Taliban the management of the Kabul Airport, calling it an important issue. The Afghan delegation highlighted the recognition of the new government as the key issue.

The Turkish foreign minister said: “We have explained to the international community the importance of engaging with the current Taliban regime. The fact is that the whole world agrees on this issue. Recognition and interaction are two different issues.”

Hezb-i-Islami Afghanistan (HIA) leader Gulbadin Hekmatyar says the international community wants an inclusive government in Afghanistan in which it has its favourite people. However, he underlined the need for an election system based on Islamic values.

Dr. Abdullah Abdullah, former head of the High Council for National Reconciliation, blamed former president Ashraf Ghani for corruption and monopoly of power, which he said alienated people from the previous administration.

He described Ghani’s escape from the country was the reason for the current chaotic situation in Afghanistan.

A number of residents of Logar province complained at a meeting that many important government agencies were still closed as people faced a host of problems related to the government.

On the other hand, Shiite clerics in Kunduz urged the government to provide security for religious sites and worship places, particularly mosques.

This comes as 330 people were killed or wounded in two attacks over the last two weeks in Kandahar and Kunduz provinces.