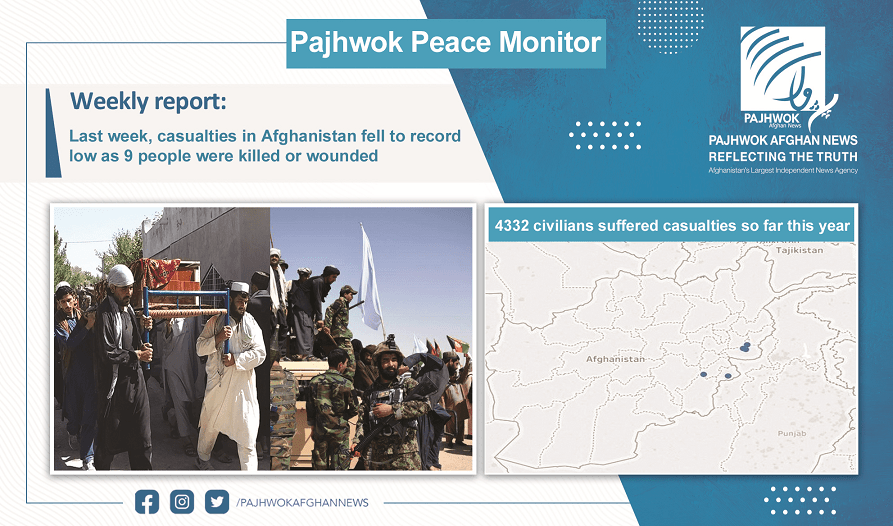 KABUL (Pajhwok): Casualty figure in Afghanistan fell to its lowest level or nine people in the past week, when some countries stressed aid to Afghanistan at a summit in Moscow and the Afghan government said it was ready for any civilized interaction with the world.

According to reports, six people were killed and three others wounded in different attacks last week.

Three children were killed and one was injured in a roadside bomb blast in Mata Khan district of Paktika province. A man was found stabbed to death and unidentified gunmen killed a former border policeman in Khost city, capital of Khost province. No one has claimed responsibility for the attacks.

Casualties were also low six weeks ago when eight people were killed and one was wounded. 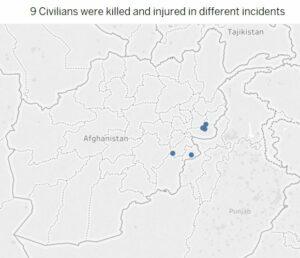 Last week’s death toll was 16 times lower than the previous one.

The Moscow summit was held on Wednesday last week with representatives from Afghanistan, Russia, China, Pakistan and seven other countries.

The Moscow conference emphasized aid to Afghanistan, Russia termed formation of an inclusive government a solution to Afghanistan’s problems, and China expressed readiness to work with the Afghan government.

Russia has blamed the current situation in Afghanistan on West’s past mission in this country, Turkmenistan has said the formation of government depended on the people of Afghanistan, while India and a number of other countries emphasized on humanitarian aid to Afghanistan.

Mulavi Abdul Salam Hanafi, Afghanistan’s deputy prime minister while addressing Moscow summit, said, “Afghanistan is ready for any civilized interaction with the world, we call on the international community to recognize the current administration and urge the United States to unfreeze Afghanistan’s frozen money.” However, the United States has refused to unfreeze the funds, saying legal means should be sought to deliver humanitarian aid to Afghans.

Special envoys of Russia, China and Pakistan promised they would continue to work with the new Afghan government and work together to unfreeze Afghanistan funds.

The United States said it did not attend the meeting in Moscow for logistical reasons.

The world statements about Afghanistan

Russia has said it is working to remove the Taliban from its list of “extremist groups.”

During a meeting with Turkish President RecepTayyipErdogan, German officials said Afghans should be helped so they were not obliged to take refuge in foreign countries.

Turkey says that if an agreement is reached, the country will work with Qatar and Afghanistan to manage Kabul Airport.

Mulavi Amir Khan Mottaqi said he had talked with Pakistani officials on trade, border opening and economic deals. Mottaqi expressed hope that economic relations between the two countries would improve.

NATO Secretary-General has said that the Taliban’s takeover of Afghanistan is a sad fact for countries that have been involved in Afghanistan for the past 20 years. However, he said that NATO’s mission and sacrifices in Afghanistan have not been wasted and had many achievements.

ZalmaiKhalilzad, the US special envoy for peace in Afghanistan, has resigned, saying the withdrawal of US troops from Afghanistan was not the last chapter. Afghans face major challenges, including economic and security, he said.

What people and politicians say?

Former President Hamid Karzai has said that Pakistan cannot represent Kabul in its matters. He said the Taliban needed to gain national legitimacy inside Afghanistan in order to gain international recognition.

He said that legitimacy is a necessity which was possible with elections or the formation of a Loya Jirga.

However, officials of Afghanistan’s new administration say the administration has regained its legitimacy with people’s support, and called elections and Loya Jirga a failure of the previous government.

Russia’s president has said, “We have got close to the time for Taliban’s recognition” while the United Nations has said that the Afghan government has assured to open girls’ schools from grade six to grade 12.

During a visit to the UN headquarters in New York last Thursday, a number of Afghan women called on the organization to stop the Taliban from being represented in the UN.

Some women protested in Kabul and asked for reopening of girls’ schools. They said that unemployment had forced women to beg.

Residents of Paktia’s three districts have called on the current government to focus on reconstruction and services and complained that they were forgotten by the previous administration.

Residents of Spin Ghar district of Nangarhar province have called on the United States to compensate them for the damage caused by the use of bombs in their areas.