US endeavours to coordinate with Russia, China, India on Afghanistan 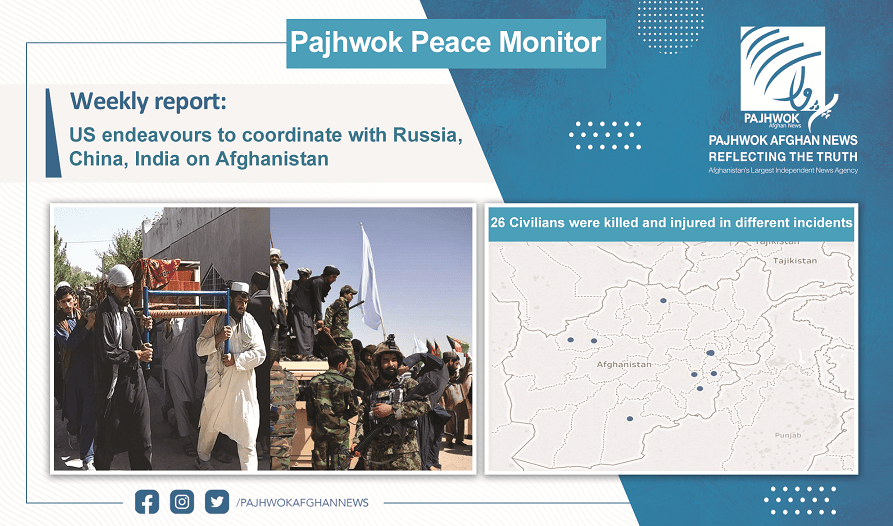 US endeavours to coordinate with Russia, China, India on Afghanistan

KABUL (Pajhwok): Last week, US strived to coordinate for a joint streategy on Afghanistan with key regional players, Afghan government stressed over cooperation with Afghanistan for meeting the challenges while 26 people killed and injured in different incidents nation-wide.

According to reports, seven people were killed and 19 others injured in different incidents of violence last week.

Two civilians were killed and eight others injured in two blasts in the Dasht-e-Barchi locality of capital Kabul, two more civilinas were killed in a megnatic bomb blast in the Mirwais Maidan area of Kabul. Daesh militant group claimed responsibility for the blasts.

Two civilias and three Daesh insurgents were killed and eight Daesh militants were wounded during a raid in Kandahar City, according to authorities. Reports showe bodies of two women recovered in Gardez, the capital of southeastern Paktia province.

In Paktia Yahyakehlo district, a trible elder was killed. Kidnappers killed a psychiatrist in Mazar-e-Sharif, the capital of northern Balkh province last week. No group claimed responsibility for these attacks. 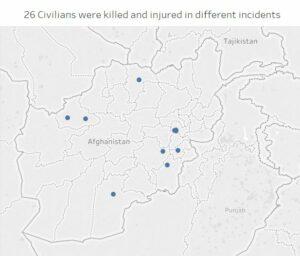 According to reports, eight people were killed and 20 others injured in violent incidents the previous week.

West also held meeting with Indian officials and discussed how both countreis could reach their shared interest in a stable and peaceful Afghanistan.

US also said that Qatar will open a US interest section in its embassy in Kabul. Earlier, Washigton said it was necessary to work with China for peace and stability in Afghanistan.

Russia welcomed US decision to work with China for peace and stability in Afghanistan.

The development comes at a time when previous week Chinese, US and Russian official participated in Trokia Plus meeting held in Islamabad.

The meeting stressed over exclusive government in Afghanistan and shared their concerns over deteriorated economic situation in the war-torn country.

In an open letter to US Congress, acting Foreign Minister Muttaqi termed freezing of Afghanistan assets by US an illogical move and termed it key factor behind deterioted economic situation in Afghanistan. He demanded unfreezing of assets and lifting of other sacntions on Afghanistan.

“We understand the concerns of the international community and America, and it is necessary for both sides to take positive steps in order to build trust. We are of the belief that freezing Afghan assets cannot resolve the problem at hand neither is it the demand of the American people, hence your government must unfreeze our capital. ”

But US Special Representative Thomas West has asked the Taliban to make practical efforts for earning legitimacy and support.

In response to Foreign Minister Amir Khan Muttaqi’s open letter to the Congress, West tweeted: “We will continue clear-eyed, candid diplomacy with the Taliban.”

Legitimacy and support must be earned by actions to address terrorism, establish an inclusive government and respect the rights of minorities, women and girls — including equal access to education and employment, he stressed.

Separately, two US Congressmen in a letter to the UN asked the multinational body to avoid recognition of the Taliban government.

This comes that earlier, US special representative said US will resume talks with the Taliban in Doha and will hold consultation with NATO member states representatives in Brussels on the recognition of the Taliban government.

Afghan foreign ministry, however, said pressurizing Afghanistan on existing crisis will not help resolve the problems and if the world wants to improve situation they should coordinate and cooperate with the people of Afghanistan.

Foreign ministry stressed the new government launched interaction with the world and would be soon recognized officially.

British Army Chief last week said that on the bases of different reasons interaction with the Taliban was a decent option to improve situation in Afghanistan.

He added there was need to talks with the Taliban to ensure an inclusive government in Afghanistan, women, girls rights and protect the achivment of past 20 years. British should engage with Afghan government, he stressed.

Iran Special Representative for Afghanistan Hassan Kazami Qummi last week arrived in Afghanistan and stressed over the formation of joint committees on political affaris, sccurity, cultural, refugees, migration and other areas to improve relationship between the two countreis.

Afghan official discussed with Uzbekistan special representative the reconstruction of Balkh Airport, renewal of electricity contract and other issues.

Uzbekistan foreign ministry says it considered Taliban a key player in Afghanistan and believed that incumbent Afghan government was not a threat for the world.

Norwegian Refugee Council serectery said althought the Taliban were responsible for good governance in Afghanistan but asked NATO states not to forget millions of Afghans they left behind.

Former President Hamid Karza said Afghanistan still has a distance from durable peace and stability and stress solution to the problems should be sought at home.