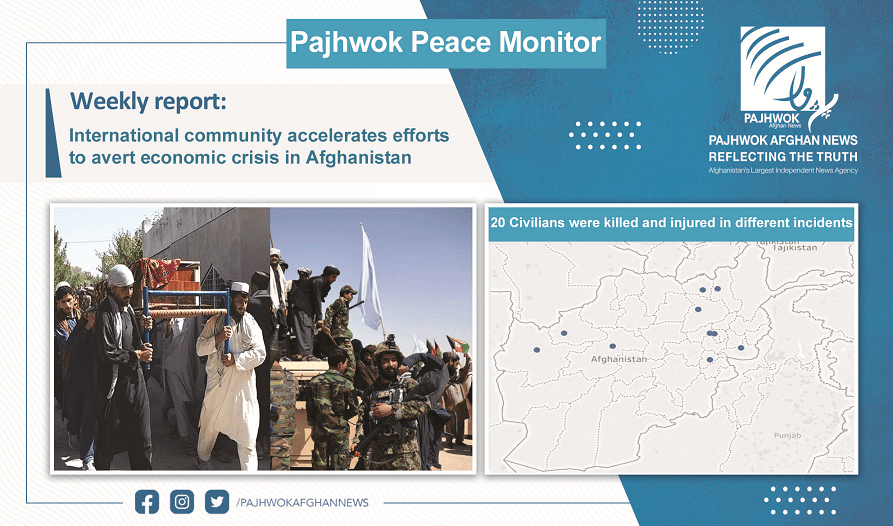 KABUL (Pajhwok): The world last week emphasized on increased humanitarian aid to Afghanistan while some countries said keeping relations with the war-torn country was important.

On the other hand, 20 people were killed or injured in various security incidents during the period in the country.

According to reports, 16 civilians were killed and four others were injured in different incidents last week.

A doctor was killed in an armed attack in Herat city and a former anti-crime officer in Shahrak district of Ghor province. Two clerics were also injured in Kapisa province in separate attacks.

Unknown men hurled a grenade into a house in Logar province, killing a mother and her child, and an explosion in Takhar province killed four children and a fifth one was injured. Two youths were killed and a child injured in an explosion in Badghis province.

No group has claimed responsibility for these attacks so far. 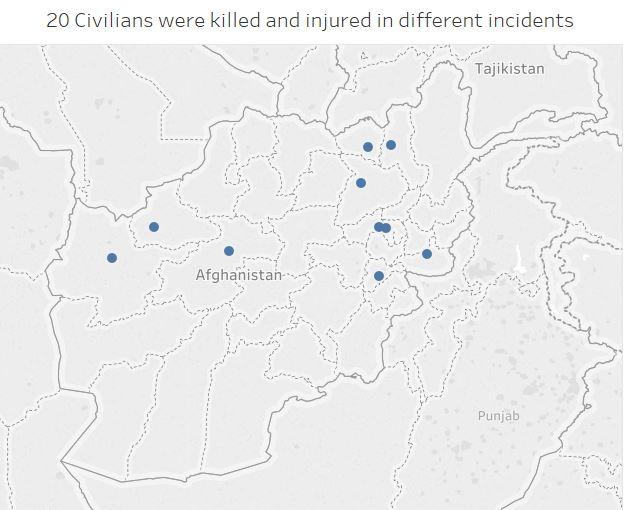 According to reports, seven people were killed and 19 others were injured in various incidents across the country the previous week.

British prime minister has said he opposes the idea of ​​isolation of the Taliban, and a compromise was needed with the new Afghan administration for delivering assistance to the Afghan people. He said the Taliban may not represent all Afghans, but they are the current Afghan officials.

This comes as Afghan and US officials started a new phase of negotiations in Qatar today.

After over a year of negotiations between the US and the Taliban in Qatar, an agreement was signed in February 2020 based on which all foreign forces withdrew from Afghanistan.

The United Nations says that a total of $600 million had been collected from the requested amount of $606 million from the international community to avert economic crisis in Afghanistan.

Last week, foreign ministers of India, Russia and China discussed the deteriorating humanitarian situation in Afghanistan and called for immediate assistance to the Afghan people.

German and Dutch special envoys during a meeting with with Afghanistan’s acting foreign minister, Amir Khan Mottaqi, pledged to find ways for paying the salaries of teachers and health workers.

The International Committee of the Red Cross (ICRC) has pledged that it would pay the salaries of health workers directly, in consultation with the Afghan Ministry of Public Health, and without the interference of Afghan government officials.

ICRC said that economic sanctions on Afghanistan have caused serious problems and a way should be sought for cash transfer to the country for responding to hunger. The committee called on donor countries to find ways to send money to Afghanistan to prevent severe malnutrition.

Amnesty International has called for urgent humanitarian assistance to Afghanistan and said economic sanctions on Afghanistan should be lifted to prevent a humanitarian catastrophe. The organization said sanctions hampered health, food and other fundamental services in the country.

The US Secretary of Defense has said that the fight against terrorism in Afghanistan – with Al Qaeda and ISIS – required cooperation, while the caretaker Afghan government said that Kabul always called for better diplomatic relations with Washington. However, Afghan officials said they need no cooperation of the US in fighting terrorism.

ISIS did not comment on the US action so far.

Our assets should be unfrozen: People

Residents of Khost province staged a peaceful protest last week, calling on the international community to unblock Afghan capital and asked for the recognition of the Afghan caretaker government.