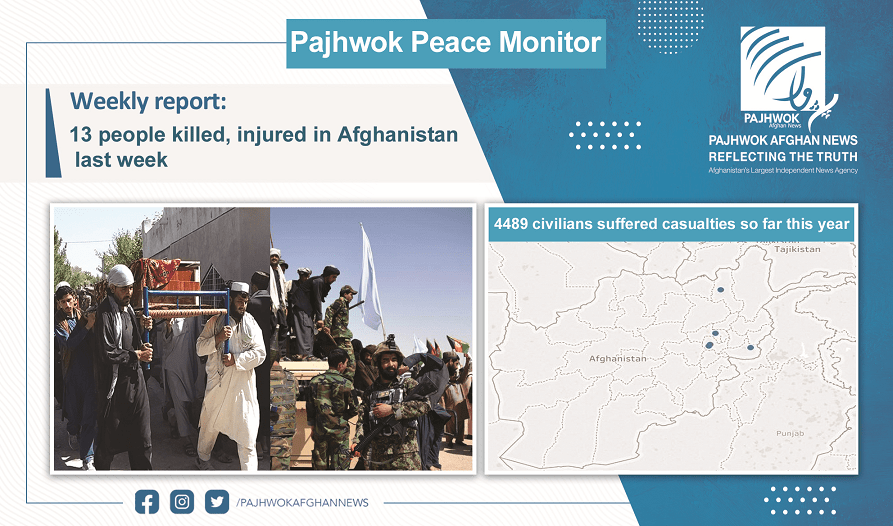 KABUL (Pajhwok): The international community continued to focus on humanitarian aid to Afghanistan last week, with Germany and Indonesia saying they would open embassies in Kabul amid a dispute over Afghanistan’s seat at the United Nations.

Like the previous week, casualties remained low last week when seven people were killed and six others injured in four incidents in Kabul, Nangarhar and Kapisa provinces.

Two civilians were killed and four others injured as a result of bomb blasts in Kabul’s Dashti Barchi area. Also in Kabul armed thieves killed a woman and a child and a child was killed after being hit by a stray bullet in Nangarhar province’s Kama district.

The blasts in Kabul were claimed by Daesh. 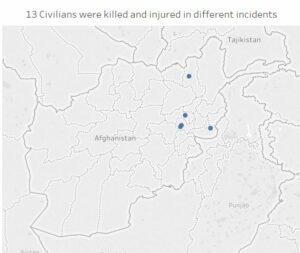 In the previous week, four civilians had been killed and a fifth injured during separate incidents across the country, bringing the casualties to record low.

Nearly four months ago, when the previous government was overthrown and replaced by a new one, the United States froze nearly $10 billion in Afghan assets and imposed other international sanctions on the country. At a result, Afghans are facing severe economic hardship and need urgent assistance.

The international community has pledged nearly $ 2 billion in total humanitarian assistance to Afghans, and aid is currently being distributed to those in need in Afghanistan.

Last week, aid to Afghans was announced and demands were made for the release of the frozen money.

China is providing $4.7 million in humanitarian aid to Afghanistan and the World Health Organization has pledged $100 million in funding for the health program in Afghanistan until the middle of next year.

UNICEF has demanded $200 million from donor organizations to address worsening humanitarian situation in Afghanistan and the International Olympic Committee pledged $560,000 for athletes in Afghanistan.

The UN has said that in order to ensure humanitarian support to Afghanistan, all UN agencies offices are open in Afghanistan while Qatar and Turkey said two companies had been determined which may take charge of Kabul Airport affairs.

The International Crisis Groups has said economic pressure on the new Afghan government will not compel them to change their strategy, asking Washington to gradually free Afghanistan’s frozen assets.

Pakistani officials have also asked the international community to support Afghanistan and avert a humanitarian tragedy.

The sanctions imposed on Afghanistan put the future of the people of Afghanistan in danger.

Qatar also termed stability in Afghanistan vital for the world and criticized international community and the UN for lacking strategy on Afghanistan.

France said it was considering a joint diplomatic mission where ambassadors of some European nations would stay.

Indonesia said for higher education and humanitarian support it would reopen its embassy in Kabul.

Saudi Arabia has already opened its consular service branch in Kabul, United Arab Emirate also opened its embassy while Japan said after assessing security situation it would open its diplomatic mission in Afghanistan.

Former United Nations envoy to Afghanistan Kai Eide has said that maintaining a seat in the world body for the ousted government in Kabul is not reasonable and called for global engagement with the current Afghan caretaker government.

Afghanistan nominated SuhailShaheen as its representative in the UN.

Trump said those military equipment included items that worth $50 million.

After the pullout of US forces, a large amount of light and heavy military equipment were left in Afghanistan which are currently under the control of the acting government.