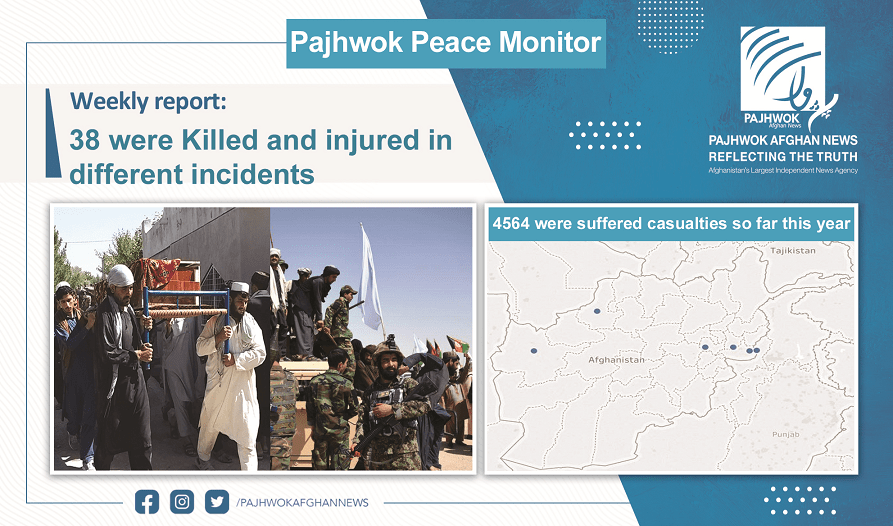 KABUL (Pajhwok): Last week, the UN and China demanded the release of Afghanistan’s frozen funds and stressed humanitarian assistence at a time when the people of Afghanistan are facing economic hardships.

Twenty-two people were killed and 16 others injured in separate incidents of violence in Kabul, Herat, Faryab, Laghman and Nangarhar provinces.

According to reports, unidentified gunmen killed a money changer in Heart and five members of a family were killed in Laghman and injured a sixth.

In Nangarhar’s Lalpura district, nine students and two women were killed, four children and a woman were injured in a gas cylinder and unexploded ordinance blasts.

In Kabul, a family claimed their daughter was killed in gunfire at a check-point in the limits of 13th police district.

In Faryab’s Balchargh district, two people were killed and three others injured during an armed clash between two armed groups. 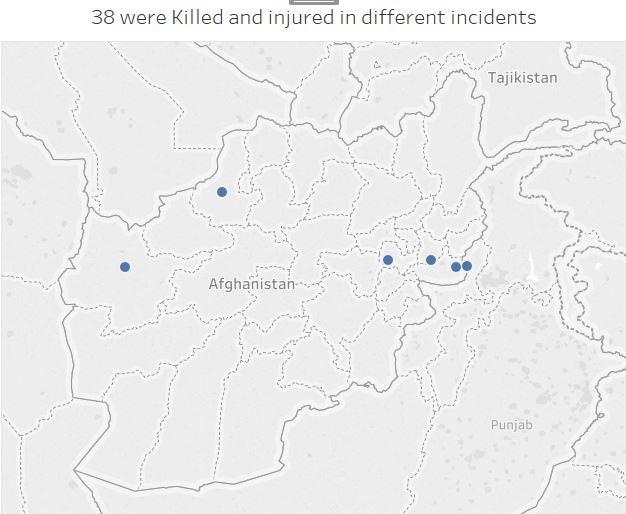 According to reports, the previous week, two blasts were reported in capital Kabul in which two civilians were superficially injured. It was the lowest weekly figure of casualties in recent years.

Afghanistan plunged into humanitarian and economic crisis after Afghanistan’s previous government was overthrown on August 15 and was replaced by incumbent acting government.

US froze Afghanistan’s’ nearly $10 billion reserves and imposed more sanctions on Afghanistan due to which the people of Afghanistan are facing economic hardships.

Afghanistan’s frozen assets should be freed

Last week hundreds of people in capital Kabul demanded the release of Afghanistan’s assets and recognition of incumbent government.

Taliban officials said implementation of the Doha Agreement could help resolve existing problems between Afghanistan and the US.

Muttaqi and his delegation also met with former jihadi commander Ismail Khan and Ahmad Shah Massoud in Iran and urged them to return to the country.

Taliban arrested Ismail Khan in Herat province but released him as part of the general amnesty. After his release from Taliban’s custody, Ismail Khan went to Iran.

Ahmad Massoud had formed an anti-Taliban resistance front in Panjsher province, but he fled the country before Taliban forces captured Panjsher.

A member of the resistance front, who declined to be named, said Ismail Khan and Ahmad Massoud had proposed a plan about interim government to the Taliban, who urged the two to return to their country.

Former President Hamid Karzai has discussed humanitarian aid and education in Afghanistan with US special envoy to Afghanistan in a telephonic conversation.

However, the ex-president’s spokesman did not provide further details about the conversation. Former president’s discussion on girls education comes as schools and public universities are still closed to girls in some parts of the country.

About a month ago, the US special envoy to Afghanistan met with a delegation from the Afghan government in Qatar, led by Foreign Minister Amir Khan Mottaqi. They had discussed unfreezing Afghanistan assets, girls’ education, human rights and some other issues.

West also held talks with Abdullah Abdullah on the situation in Afghanistan.

Reports say some women wrote on walls at night in Kabul that read:”I am a woman, education and work is our right. Bread, work and independence.”

The Taliban government has said it is committed to women’s Islamic rights like education, work and inheritance and girls schools and universities would be reopened soon.