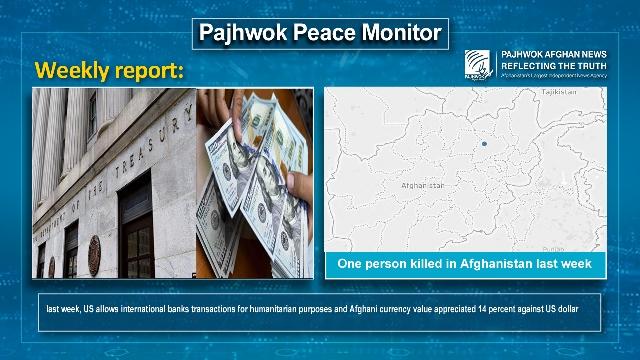 KABUL (Pajhwok): One person was killed in Afghanistan last week, the US allows international banks transactions for humanitarian purposes and Afghani currency value appreciated 14 percent against the US dollar compared to the previous week.

ٌWhen Security personnel found Tajuddin he was asked to surrender but attempted to escape and at that moment a security personnel’s foot slipped and his figure unintentionally pressed the trigger thus the bullet hit Tajuddin and killed him. 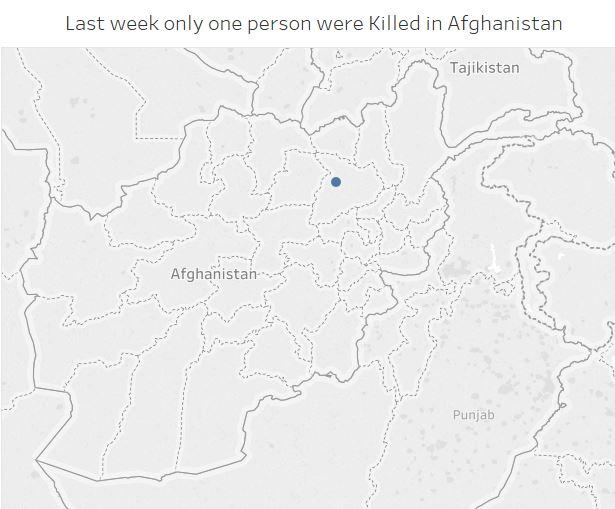 100 people killed or not

Last week, the UN claimed 100 people who worked with foreign forces and served in the previous Afghan government were killed in the past five months but the Afghan government rejected the report and said the claim was based on incorrect information.

Last week the EU Parliament held a two-day summit on Afghan women, some notable Afghan women were invited to the summit.

The vice president of the EU Parliament Heidi Hautala said the bloc must not recognise new govt in Afghanistan while women face restrictions in the country.

“We need to be very very careful so that we do not end up in the situation where important countries including the European Union member states and the EU as such will give recognition to the Taliban and things just continue as they are today … million and millions of women are kept inside their homes,” she was quoted by media outlets as saying.

Tajikistan said, Dushanbe’s stance on the Taliban did not change and demanded the creation of an inclusive government from the Taliban.

Russian Special Envoy for Afghanistan Zameer Kablov said if an inclusive government came into existence through dialogue sanctions against the Taliban could be removed.

The call for an inclusive government in Afghanistan is being renewed by these sources although the Afghan government has often said that the current government was inclusive and more efforts were being made to expand its inclusiveness.

According to officials, universities for men and women are reopened and all girls and boys will go to school by the opening of the new educational year nationwide.

According to reports Afghan government officials were asked to convene a Loya Jirga during meetings with western representatives in Oslo last week in order to end the political crisis in war-torn Afghanistan.

Hizb-i-Islami Leader Gulbuddin Hekmatyar said that was a demand from NATO and the US. He said a credible authority was needed to approve a constitution and future government system. The authority to make these approvals should be formed from the representatives of the masses.

Russia’s special envoy to Afghanistan, Kabulov said that a meeting of Troika would be held among member states in Kabul later this month to discuss “Completion of Intra-Afghan peace process” and the role of the international community in the reconstruction of Afghanistan. Currently, representatives of the Troika member states including China, Pakistan, the United States, and Russia are coordinating for the summit, he said.

According to reports, the Pakistani delegation and Afghan officials discussed the development of relations between the two countries and political, security, and trade issues. An official who wished to be unnamed told TOLOnews that the recent disputes over the supposed Durand Line were also on the agenda of the meeting between the two sides.

After the Pakistani delegation’s visit, the Afghan government created a committee to resolve the issues along the Durand Line, so that the problems along the line do not escalate between Afghanistan and Pakistan in the future.

Durand Line Agreement between Afghanistan and Pakistan was signed between then Afghan King, Amir Abdul Rahman Khan, and British India’s Foreign Secretary, Henry Mortimer Durand in 1893. However, the Durand Line was not accepted by Afghan governments and people on both sides.

Over the last several years, Pakistan has started installing barbed wire along the line, which has led to many armed confrontations between the two countries’ border guards. Some video clips have recently surfaced on social media showing Afghan security forces removing barbed wire in some areas along the Durand Line.

According to reports, Pakistan recently launched another rocket attack on Kunar province which was responded by Afghan security forces.

The US Department of the Treasury last week said that international banks could send money to Afghanistan for humanitarian purposes and that donors could pay the salaries of teachers and health workers in government agencies without concerns.

Besides that, Pajhwok’s weekly economic report shows that the value of the afghani currency appreciated by more than 14 percent against the US dollar today Saturday.

A week ago today, the exchange rate of one US dollar was 102 afghanis compared to 88 afghanis today.

According to reports, Canada will provide $2 million for the earthquake-affected people in Badghis province and Germany pledged to provide $140 million in aid to Afghanistan.

A senior UN official said they have $135 million in the World Bank for Afghanistan, but they are unable to use the money.

The official says that Da Afghanistan Bank (DAB) had promised that the money would be exchanged with afghanis, but the bank has yet to do so.

Zabihullah Mujahid, a spokesman for the Islamic Emirate, rejected the claim that DAB was unable to convert the US dollar into afghanis.

He said, “The UN or any other organizations did not transfer money to DAB, otherwise the central bank is able to convert any amount of US dollar into afghanis, speculations on this issue are untrue.”