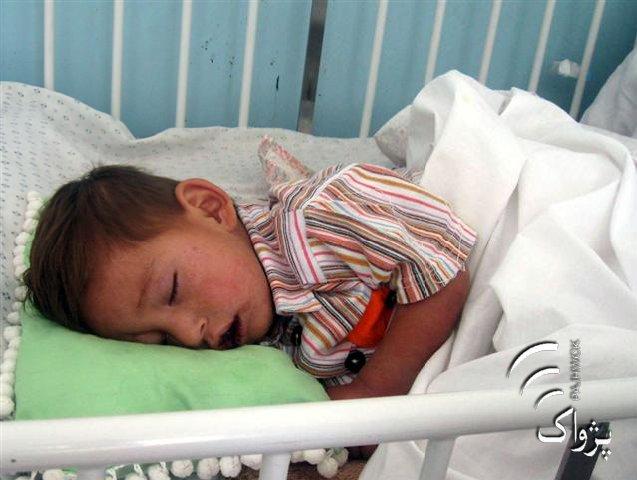 FEROZKOH (Pajhwok): Officials of the Provincial Hospital in western Ghor province on Thursday 2100 children were hospitalized suffering from measles and malnourishment and 72 of them had died.

Dr. Abdul Hamid Noori, the hospital director, told Pajhwok Afghan News that the total number of children brought to hospital with measles disease was 2154 and 2104 of them recovered and 49 of them died and 32 children were under treatment.

He said 508 malnourished children were also brought to the hospital and 475 of them recovered but 23 of them died and 13 others were being treated.

Officials at the Provincial Hospital said the hospital was facing a number of problems, including a shortage of beds, medicines, human resources and medical facilities. Dr. Noori said due to these problems, they were forced to treat three to four patients in each bed.

“The Ghor Provincial Hospital alone provides services to thousands of residents of the province and all major operations are done in this hospital. Unfortunately, we are facing a shortage of facilities. We are trying to ensure that all people are provided with best services. ”

He said from 100 to 500 patients visited the hospital on a daily basis and they could not reach all the patients with less staff.

On the other hand, attendants of some patients at the Ghor Provincial Hospital said they had been waiting for months for their patients to get better, but due to poor quality medicines, the patients were not recovering.

“It’s been three months since I came here, medicines in the hospital are of poor quality and give no result,” said Mahgul, whose child was admitted for measles.

Mohammad Musa, head of the children’s department at Ghor Provincial Hospital, said some children died due to a lack of beds, electricity, personnel and medicine.

“Ghor provincial hospital has a lot of problems,” he said. Every day 100 to 150 children are brought to the children’s ward alone, there are few doctors, one doctor and few nurses can’t reach all the patients. Substandard medicine are brought to hospital There is no electricity to produce oxygen and patients can use it. That’s why so many children die unfortunately. ”

Doctors and relatives of patients urged the central authorities to pay serious attention to the problems of the people and send quality medicine to hospitals of the province.