Eighteen people were killed and 17 others injured in Afghanistan last week, the figures do not include casualties inflicted by natural disasters.

According to reports, unidentified gunmen killed five members of a family, including three children, in Herat City. A body was recovered while unknown gunmen killed a man in Baghlan province’s capital Pul-i-Khumri.

Last week, two teachers and a student were wounded in security forces firing in the Panjwai district of Kandahar province, in Kabul City’s Baraki Square a security personnel killed two people when a personal dispute turned violent. In Balkh province capital Mazar-i-Sharif, intelligence personnel shot dead a man when he refused to stop at a checkpoint.

According to reports, a money changer was killed in the Sancharak district of Sar-i-Pul province. 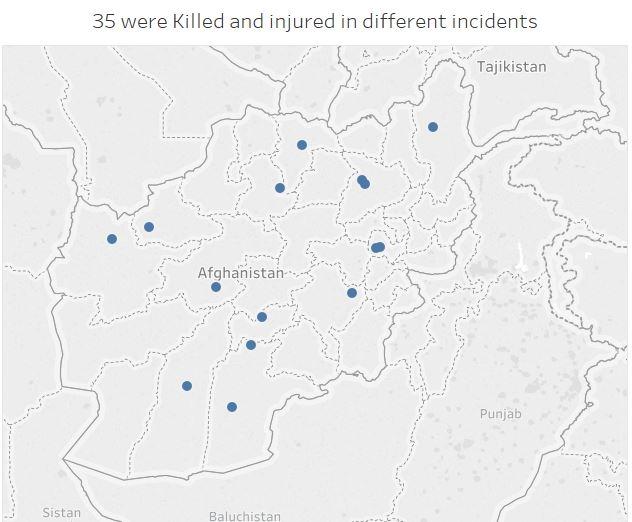 At least nine people were killed and 24 others injured in the previous week, according to reports.

Decline in casualties comes at a time when last year before political change in the country hundreds of people would get killed and injured due to the war.

Mottaqi said in the meeting that the Afghan government has fulfilled all pledges for its recognition and Afghans should be treated the same as other people were treated around the world.

Afghan foreign minister said that the Afghan and US delegations agreed that the $3.5 billion released by the US would not be given to aid organizations.

The US special envoy to Afghanistan, Thomas West, said he had fruitful talks with the Afghan delegation, discussed important issues for Afghans, economic growth, education and trade.

West in a tweet on Friday said that he discussed with his international allies the latest developments in Afghanistan and the world’s engagement with this country in the Antalya Economy Forum.

The Organization of Islamic Cooperation (OIC) last week opened an office in Kabul and appointed Mohammad Saeed Al-Ayyash as its Special Representative in Afghanistan.

The Chinese Foreign Ministry says it is working with Afghanistan’s neighbor countries to accelerate the delivery of humanitarian aid to Afghans.

Afghan acting foreign minister said he will attend a meeting of foreign ministers of neighboring countries in China in late March and hoped for fruitful results of the meeting for Afghanistan.

The aid comes as the World Food Program (WFP) says its budget is running out, with 23 million people in Afghanistan currently faced with lack of food security and 95 percent without access to adequate food.

United Nations High Commissioner for Refugees (UNHCR) also expressed concern over the deteriorating economic situation in Afghanistan, and the International Rescue Committee (IRC) has said that the world should take necessary steps to prevent economic crisis in Afghanistan.

Meanwhile, the United Nations Population Fund (UNFPA) has saidthat there is need for $250 million to support humanitarian assistance in Afghanistan.