KABUL (Pajhwok): At least 73 people were killed and injured in Afghanistan last week, while a decree banning poppy cultivation and Russia’s acceptance of a diplomat from the new Afghan government were other important news.

At least five people have been killed and 68 others injured in Afghanistan in the past week.

One person was killed and 57 others were injured in a grenade attack on Kabul’s money market  and nearly a dozen were injured in a similar attack on the Pul-e-Khashti mosque in Kabul, according to reports. Also, two armed robbers killed a shopkeeper in Parwan-e-Seh area of Kabul city.

The bodies of a 24-year-old man and of a 14-year-old boy were found in Taloqan, the capital of Takhar province and in Kandahar city respectively.

Also, a man killed his mother in the Haska Mina district of Nangarhar, according to reports. 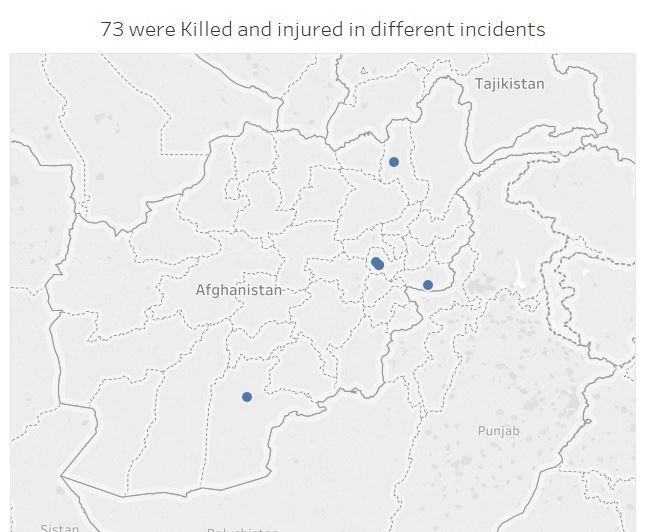 At least 25 people were killed and 38 others were injured in Afghanistan in the previous week.

Hundreds of people would get killed and injured in the fighting every week in the country before the political change in August.

Last week, a decree issued by the Taliban supreme leader banned cultivation, trafficking, purchase and sale of opium and all kinds of narcotics. The decree states that if anyone violates the law, the crop will be destroyed and the violator will be treated according to Islamic law.

The decree comes at a time when most of the world’s narcotics is currently being produced in Afghanistan and has yet to be stopped, despite the international community spending billions of dollars over the past two decades.

Special envoys from the United States, European Union, France, Germany, Italy, Norway and the United Kingdom at a special meeting on Afghanistan in Brussels called on the Afghan government to fulfill its promises with the international community and the Afghan people.

Zalmay Khalilzad, a former US special envoy to Afghanistan last week during a meeting with Pakistani officials on the sidelines of a security meeting in Pakistansaid that ‘Islamic Emirate’ did not adhere to the Doha Agreement in its current political structure.

Bilal Karimi, deputy spokesman for the caretaker government, said, “Khalilzad is just one person… he does not represent any country or organization, so his views are personal and currently all the things are moving in accordance with agreements and principles.”

Meanwhile,United Nations Development Program (UNDP) officials in Afghanistan emphasized that Afghanistan will not be stable without economic development.

UNDP said that current humanitarian aid to Afghanistan is insufficient as millions of people in the country are facing economic challenges.

School year in Afghanistan was started on March 23, but the government postponed the opening of girls’ classes above sixth grade until further notice, saying the schools would reopen once a comprehensive plan was developed.

However, the move faced with backlashes.

UN Secretary-General last week expressed concern about the government’s decision regarding girls’ schools, calling it unfavorable to Afghanistan. The United Nations Assistance Mission in Afghanistan (UNAMA) called the decision “discriminatory” and said it would affect future generations of the country in a negative way.

The EU also condemned the decision and called on Afghan officials to honor their promises.

A number of people and religious scholars in Kabul and Balkh provinces also called on the caretaker government to reopen secondary and high school for girls.

The week before last, the Afghan caretaker government closed BBC, VOA and Deutsche Welle television programs which were broadcasted through Afghan channels in Afghanistan.

The government’s decision on media also drew some domestic and foreign reactions.

Moreover, UNAMA asked the Afghan government to discuss with media representatives about their problems and remove restrictions on media outlets.